21 Reasons Technology Works for Education. If you're an educator or someone who works in the nation's K–12 system, you're probably familiar with the word no: No, we don't have enough money for supplies. 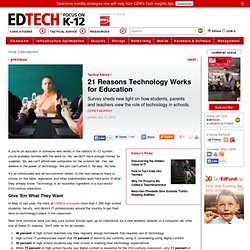 No, we can't afford new computers for the science lab. Yes, we believe in the power of technology. We just can't afford it. No way. No how. It's an unfortunate and all-too-common refrain. In May of last year, the folks at CDW-G surveyed more than 1,000 high school students, faculty, and district IT professionals around the country to get their take on technology's place in the classroom. Next time someone asks you why your school should open up its checkbook for a new wireless network or a computer lab, offer one of these 21 reasons. 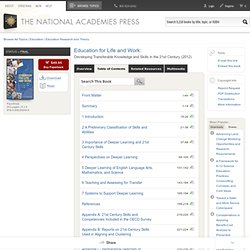 Education is even more critical today, in the face of economic, environmental, and social challenges. Today's children can meet future challenges if their schooling and informal learning activities prepare them for adult roles as citizens, employees, managers, parents, volunteers, and entrepreneurs. “Deeper Learning” Report. The National Research Council of the National Academies of Science have just published a report titled Education for Life and Work: Developing Transferable Knowledge and Skills in the 21st Century. 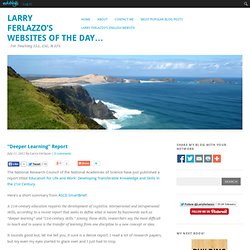 15 Habits For Learning In The 21st Century. Defining 21 st century skills is an editorial matter. There are dozens of examples floating range with a range of authority behind them—some inspired, grassroots efforts, other core brands of multimillion dollar organizations making a national push. There is even debate as to whether they are truly necessary, the idea being that learning habits and priorities are timeless, and do not change because the world itself changes. But the scale and rate of change are unrelenting. Culture oozes forward. What should students learn in the 21st century? By Charles FadelFounder & chairman, Center for Curriculum Redesign Vice-chair of the Education committee of the Business and Industry Advisory Committee (BIAC) to the Organization for Economic Co-operation and Development (OECD)Visiting scholar, Harvard GSE, MIT ESG/IAP and Wharton/Penn CLO It has become clear that teaching skills requires answering “What should students learn in the 21st century?” 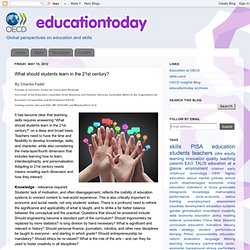 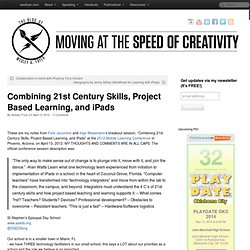 If you are new here, you might want to <a href=" rel="nofollow"><strong>subscribe to the RSS feed</strong></a> for updates on this topic. #IHPortugal Training Day: Facebook in the Classroom. This is the second of a series of posts reflecting on seminars I attended at the recent IH Portugal Training Day. 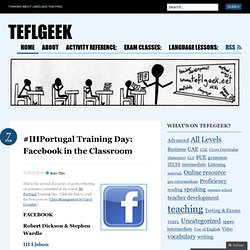 Click the link to read the first post on “Class Management by Carol Crombie“. Robert Dickson & Stephen Wardle IH Lisbon For some time now, I’ve been experimenting with a number of web tools, attempting to create an online environment for my learners – an extension of the classroom, an alternative channel of communication, a shared resource…. and the conclusion I came to fairly early on was that facebook was probably the best means of achieving this. Tools for Learners.

Technology and Education. 84 EdTech Resources You May Have Missed Treasure–Chest December 4, 2011. Burundi. Sustainable Development – Earth Charter Initiative. Scuttlebutt News: Learning at the Extreme. ….a conversation about leveraging technology to support learning. 21st Century Education. ENJOY ENGLISH. Back-to-school-with-google-docs. Last year all of the students in our school district received Google Docs accounts and I was kept quite busy all year getting students up and running and then finding innovative ways to use the tools for learning. 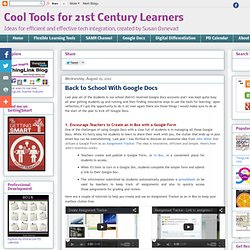 Upon reflection,if I got the opportunity to do it all over again there are three things I would make sure to do at the start of the year to kick off Google Docs. 1. Encourage Teachers to Create an In Box with a Google Form One of the challenges of using Google Docs with a class full of students is in managing all those Google Docs. While it's fairly easy for students to learn to share their work with you, the clutter that ends up in your email box can be overwhelming.

Teachers create and publish a Google Form, or In Box, in a convenient place for students to access. 2. The Google Docs revision history tracks all changes that have been made to a document by each collaborator, which makes this a useful feature for student accountability. 3. How to Use an Existing Templates. Top 20 ESL/EFL Web Sites. Movie Maker.