Long-distance running and evolution: Why humans can outrun horses but can’t jump higher than cats. By Chris McGrath/Getty Images. 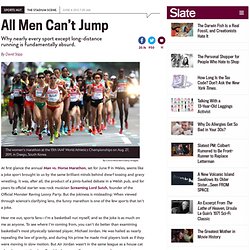 At first glance the annual Man vs. Horse Marathon, set for June 9 in Wales, seems like a joke sport brought to us by the same brilliant minds behind dwarf tossing and gravy wrestling. It was, after all, the product of a pints-fueled debate in a Welsh pub, and for years its official starter was rock musician Screaming Lord Sutch, founder of the Official Monster Raving Loony Party. But the jokiness is misleading: When viewed through science’s clarifying lens, the funny marathon is one of the few sports that isn’t a joke.

Hear me out, sports fans—I'm a basketball nut myself, and so the joke is as much on me as anyone. There's no denying it—our kind started substituting brains for brawn long ago, and it shows: We can't begin to compete with animals when it comes to the raw ingredients of athletic prowess. New Sensor Paves the Way for Night Vision Contact Lenses. Contact lenses sharpen our blurry vision, and free us from the hassle of pushing sliding glasses back up our noses. 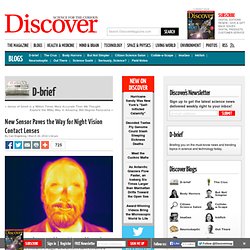 But the future of contacts is nigh: Researchers have created a super-thin infrared sensor that could lead to the development of night vision contact lenses. Night vision, presently, is a rather clunky technology — epitomized in the rainy Tyrannosaurus rex scene in the original Jurassic Park. To see in the dark, a person dons a set of binocular-shaped goggles strapped to the head. The devices also produce a lot of heat, so they need to be cooled, adding to the overall volume of mechanics required. Now, researchers from the University of Michigan are close to packing night vision’s clumsiness into technology that fits on your fingertip. Sensitizing Graphene If you look at graphite under a microscope, it’s comprised of thin layers of stacked carbon. Scientists already know that graphene can absorb the entire infrared spectrum, as well as visible light and ultraviolet light. Make taser-proof clothing with carbon-fiber linings. 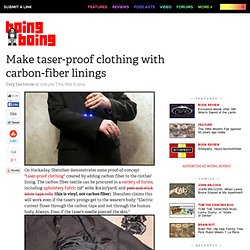 The carbon fiber textile can be procured in a variety of forms, including upholstery fabric (58" wide, $19.50/yard) and peel-and-stick 50cm tape rolls (this is vinyl, not carbon fiber). Shenzhen claims this will work even if the taser's prongs get to the wearer's body: "Electric current flows through the carbon tape and not through the human body. Stylin' bulletproof suit absorbs small-arms fire. Bulletproof vests may be practical, life-saving garments, but they're hardly fashion-forward. 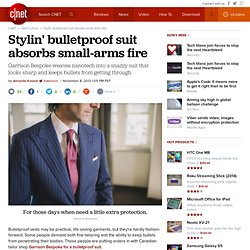 Some people demand both fine tailoring and the ability to keep bullets from penetrating their bodies. Those people are putting orders in with Canadian tailor shop Garrison Bespoke for a bulletproof suit. Garrison specializes in luxury garments, so don't gasp when you find out the bulletproof suit starts at $20,000.

Carbon nanotubes in a layer under the exterior fabric harden on impact to stop both bullets and knife blades. The technology was originally developed for use in US military applications. Romania Makes the Ultimate 4-Wheeled Superhero Vehicle. The world needs a four-wheeled hero. 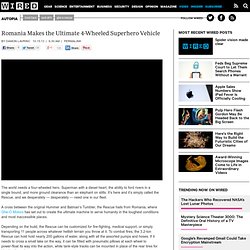 Superman with a diesel heart, the ability to ford rivers in a single bound, and more ground clearance than an elephant on stilts. It’s here and it’s simply called the Rescue, and we desperately — desperately — need one in our fleet. A cross between the original Hummer and Batman’s Tumbler, the Rescue hails from Romania, where Ghe-O Motors has set out to create the ultimate machine to serve humanity in the toughest conditions and most inaccessible places. Depending on the build, the Rescue can be customized for fire-fighting, medical support, or simply transporting 11 people across whatever hellish terrain you throw at it. To combat fires, the 3.2-ton Rescue can hold hold nearly 200 gallons of water, along with all the assorted pumps and hoses. 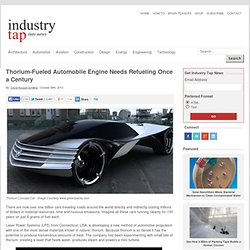 Imagine all these cars running cleanly for 100 years on just 8 grams of fuel each. Laser Power Systems (LPS) from Connecticut, USA, is developing a new method of automotive propulsion with one of the most dense materials known in nature: thorium. Because thorium is so dense it has the potential to produce tremendous amounts of heat. Cadillac World Thorium Fuel Concept (Image Courtesy www.cutedesign.com) Current models of the engine weigh 500 pounds, easily fitting into the engine area of a conventionally-designed vehicle.

The idea of using thorium is not new. According to Robert Hargraves, “low or non-CO2 emitting energy sources must be cheaper than coal or will ultimately fail to displace fossil fuels.”