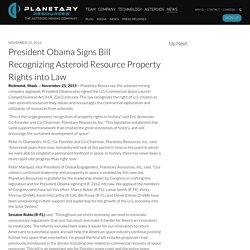 Commercial Space Launch Competitiveness Act (H.R. 2262) into law. This law recognizes the right of U.S. citizens to own asteroid resources they obtain and encourages the commercial exploration and utilization of resources from asteroids. “This is the single greatest recognition of property rights in history,” said Eric Anderson, Co-Founder and Co-Chairman, Planetary Resources, Inc. “This legislation establishes the same supportive framework that created the great economies of history, and will encourage the sustained development of space.”

Peter H. Peter Marquez, Vice President of Global Engagement, Planetary Resources, Inc., said, “Our nation’s continued leadership and prosperity in space is enabled by this new law. Congressman Posey (R-FL) said, “This bipartisan, bicameral legislation is a landmark for American leadership in space exploration. ‘‘Sec. Terraforming Mars by nudging asteroids into a collision course, forty such impacts would give Mars a temperate climate, and enough water would have been melted to cover a quarter of the planet with a layer of water 1m deep. : space. How to Use a Black Hole's Spin to Harvest Energy. A Tiny Satellite With Enormous Solar Sails Is Orbiting Our Planet. A Particle Accelerator in Space Could Trigger Artificial Auroras  Bussard ramjet. Artist's conception of a Bussard ramjet. 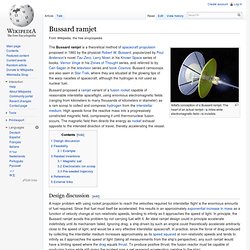 The heart of an actual ramjet—a miles-wide electromagnetic field—is invisible. Bussard proposed a ramjet variant of a fusion rocket capable of reasonable interstellar spaceflight, using enormous electromagnetic fields (ranging from kilometers to many thousands of kilometers in diameter) as a ram scoop to collect and compress hydrogen from the interstellar medium. High speeds force the reactive mass into a progressively constricted magnetic field, compressing it until thermonuclear fusion occurs. The magnetic field then directs the energy as rocket exhaust opposite to the intended direction of travel, thereby accelerating the vessel. Design discussion[edit] An object's velocity can be calculated by summing over time the acceleration supplied (ignoring the effects of special relativity, which would quickly become significant at useful interstellar accelerations). The top speed of a ramjet-driven spaceship depends on five things: Feasibility[edit] Japanese Scientists Just Beamed Energy Through the Air.

Space Elevator. Asteroid Mining: Is it worth it? : space. How to power a starship with an artificial black hole. NASA has found a free particle accelerator floating in space. Bernal sphere. External view of a Bernal sphere Interior of a Bernal sphere A Bernal sphere is a type of space habitat intended as a long-term home for permanent residents, first proposed in 1929 by John Desmond Bernal. 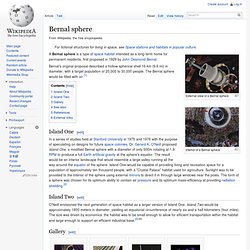 Bernal's original proposal described a hollow spherical shell 16 km (9.9 mi) in diameter, with a target population of 20,000 to 30,000 people. The Bernal sphere would be filled with air.[1] Island One[edit] In a series of studies held at Stanford University in 1975 and 1976 with the purpose of speculating on designs for future space colonies, Dr. Island Two[edit] How to Measure the Power of Alien Civilizations Using the Kardashev Scale. I believe that one of the criticisms of Dyson Spheres is that any civilization that could build one would never do it because they would have already developed even more advanced technologies to make them unnecessary or obsolete. 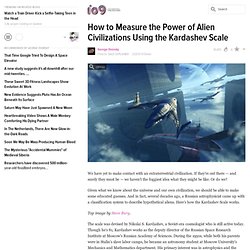 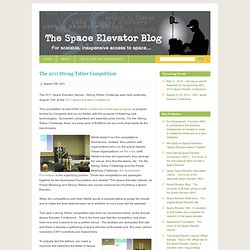 This competition is part of the NASA Centennial Challenges program, a program funded by Congress and run by NASA, with the purpose of fostering new technologies. Successful competitors are awarded prize money. For the Strong Tether Challenge, there is a prize pool of $2Million for any entry that meets all the benchmarks. NASA doesn’t run the competitions themselves. When the competitions are held, NASA sends a representative to judge the results and to make the final determination as to whether or not a prize will be awarded. How Space Elevators Will Work" When the Space Shuttle Columbia lifted off on April 12, 1981, from Kennedy Space Center, Fla., to begin the first space shuttle mission, the dream of a reusable spacecraft was realized. 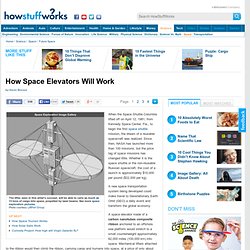 Since then, NASA has launched more than 100 missions, but the price tag of space missions has changed little. Google X's Space Elevator: Why It Will Not Happen Soon. Some ideas just refuse to go away: trickle-down economics, the bolo tie, couscous. 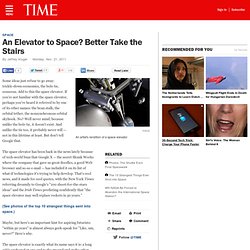 At Google X, a Top-Secret Lab Dreaming Up the Future. It’s a place where your refrigerator could be connected to the Internet, so it could order groceries when they ran low. 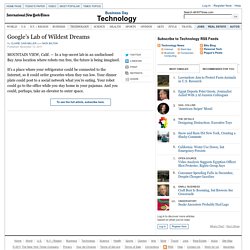 Your dinner plate could post to a social network what you’re eating. Your robot could go to the office while you stay home in your pajamas.