Tumblr Adds Action Buttons So You Can Buy Items And More. Buttons appeared on Tumblr today that allow its users to purchase goods or get behind causes they support.

First spotted by TechCrunch, the new “action” buttons allow users to Buy, Browse, Pledge or Do Something on posts with links to pages on Etsy, Artsy, Kickstarter and Do Something respectively. The new action buttons are only available on the desktop and take users directly to the page to purchase an item or support a cause. Tumblr’s post about the new button touts it as a way to get followers “one click closer to the thing you’re showing them.” ➤ Tumblr Now Has ‘Buy,’ ‘Pledge,’ And ‘Get Involved’ Buttons [Techcrunch] How To Optimize Google My Business for Success. Britt Klontz is a PR Consultant at Distilled, a creative online marketing agency. 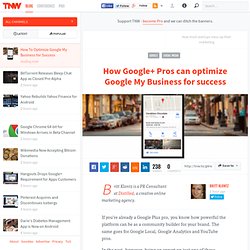 If you’re already a Google Plus pro, you know how powerful the platform can be as a community builder for your brand. The same goes for Google Local, Google Analytics and YouTube pros. In the past, however, being an expert on just one of these platforms hasn’t guaranteed competence with any of the others, let alone that you’d have the time and energy to manage all of them successfully. Top 10 Moments From Obama's First-Ever Tumblr Chat. President Barack Obama hosted David Karp, CEO and co-founder of Tumblr, and some special Tumblr guests at the White House on Tuesday to chat about issues surrounding college, education and student loans. 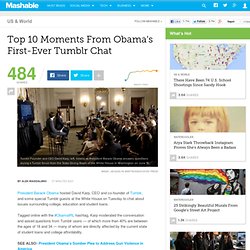 Tagged online with the #ObamaIRL hashtag, Karp moderated the conversation and asked questions from Tumblr users — of which more than 40% are between the ages of 18 and 34 — many of whom are directly affected by the current state of student loans and college affordability. In between the President's advice for students, backstage fist bumps with Karp and talking about his administration's announcement about extending the Pay As You Earn student loan repayment program, Obama offered up some truly RL moments — making jokes and waxing poetic about life. Detroit's Downturn Visualized in Google Street View Images. Detroit declared bankruptcy last year and parts of the city are suffering severely from its economic decline. 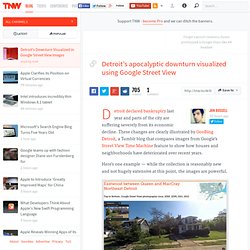 These changes are clearly illustrated by GooBing Detroit, a Tumblr blog that compares images from Google’s Street View Time Machine feature to show how houses and neighborhoods have deteriorated over recent years. Here’s one example — while the collection is reasonably new and not hugely extensive at this point, the images are powerful. ➤ GooBing Detroit Thumbnail image via Joshua Lott / AFP / Getty Images. Beyond Analytics: Understanding Humans While Scaling Your Business. Jonatan Littke is the CEO and co-founder of Lookback. 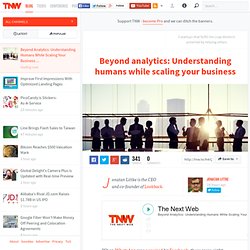 When WhatsApp was acquired by Facebook, there were eight million WhatsApp users for every employee. Eight million. Traditionally in business, when you scale up your company, you grow your number of employees along with your number of customers. If Target opens up a new store, it will hire more people to interact with new customers, listening to their needs and desires. This is not the case anymore. Analytics doesn’t answer the why To make sense of all these customers, we pack them together in analytics software to try to understand them.This lets us see where people tap in our apps, how often they return to our website, how many purchases they make before calling customer service and so on. But this does not substitute true understanding.

As you grow, your customer base will likely be increasingly diverse and increasingly different from yourself. Understanding humans. Oculus CTO Talks Facebook in the Comments of a Random Tumblr Post. John Carmack, the former cofounder of id Software and chief technology officer of Oculus VR, said he believes Facebook — which just acquired his company for $2 billion — gets the "big picture" of virtual reality. 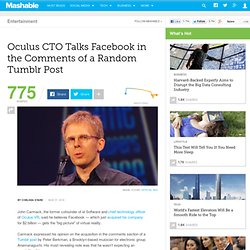 Carmack expressed his opinion on the acquisition in the comments section of a Tumblr post by Peter Berkman, a Brooklyn-based musician for electronic group Anamanaguchi. His most revealing note was that he wasn't expecting an acquisition this soon. "I wasn't personally involved in any of the negotiations — I spent an afternoon talking technology with Mark Zuckerberg, and the next week I find out that he bought Oculus," Carmack wrote.

"Honestly, I wasn't expecting Facebook (or this soon). I have zero personal background with them, and I could think of other companies that would have more obvious synergies. Carmack was hired as Oculus VR's CTO in August, though he has been involved with the company since its early days. Tumblr drafts new terms of service that encourage attribution, ban impersonation and more. Tumblr Introduces @Mentions for Users. Tumblr announced on Tuesday it is finally adding capabilities for users to directly mention others on the site, a feature that's been long requested by its dedicated fan base. 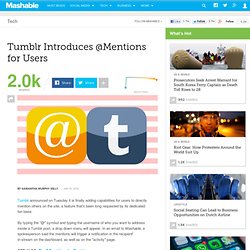 By typing the "@" symbol and typing the username of who you want to address inside a Tumblr post, a drop down menu will appear. In an email to Mashable, a spokesperson said the mentions will trigger a notification in the recipient' in-stream on the dashboard, as well as on the "activity" page.