News Online. News matters. It is still the main forum for discussion of issues of public importance. It is where we come together to inform, persuade, influence, endorse or reject one another in a collaborative process of making meaning from events. But the news is changing — content, distribution channels, geographical constraints, production values, business models, regulatory approaches and cultural habits are all in flux, as new media technologies are adopted and adapted by users.

However, despite having driven many of the changes themselves, established media organisations are in many cases struggling to adapt to this changed environment. News Online: Transformations and Continuities is for everyone who wants to better understand the news media of the twenty-first century. Lives of citizen journalist and activist who helped resistance media in danger. (RSF/IFEX) - Reporters Without Borders is extremely concerned for the lives of Ali Mahmoud Othman, a Homs-based citizen journalist who was arrested on 28 March in Aleppo, and Noura Al-Jizawi, a woman activist working for opposition media who was abducted by the security services the same day in Damascus. 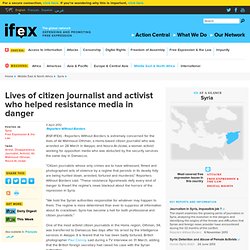 “Citizen journalists whose only crimes are to have witnessed, filmed and photographed acts of violence by a regime that persists in its deadly folly are being hunted down, arrested, tortured and murdered,” Reporters Without Borders said. “These resistance figureheads defy every kind of danger to thwart the regime's news blackout about the horrors of the repression in Syria. “We hold the Syrian authorities responsible for whatever may happen to them. The regime is more determined than ever to suppress all information about its crackdown. Syria has become a hell for both professional and citizen journalists.”

Agreeableness. Agreeableness is a personality trait manifesting itself in individual behavioral characteristics that are perceived as kind, sympathetic, cooperative, warm and considerate.[1] In contemporary personality psychology, agreeableness is one of the five major dimensions of personality structure, reflecting individual differences in cooperation and social harmony.[2] People who score high on this dimension tend to believe that most people are honest, decent, and trustworthy. 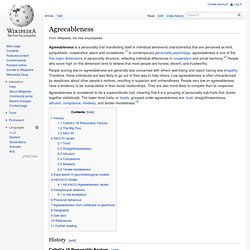 People scoring low on agreeableness are generally less concerned with others' well-being and report having less empathy. Therefore, these individuals are less likely to go out of their way to help others. Low agreeableness is often characterized by skepticism about other people's motives, resulting in suspicion and unfriendliness. People very low on agreeableness have a tendency to be manipulative in their social relationships. They are also more likely to compete than to cooperate. Authority. The word authority is derived from the Latin word auctoritas, meaning 'invention', 'advice', 'opinion', 'influence', or 'command'.

In English, the word authority can be used to mean power given by the state (in the form of government, judges, police officers, etc.) or by academic knowledge of an area (someone can be an authority on a subject). When the word Authority is used in the name of an organization, this name usually refers to the governing body upon which such authority is vested; for example, the Puerto Rico Electric Power Authority or the Massachusetts Bay Transportation Authority. 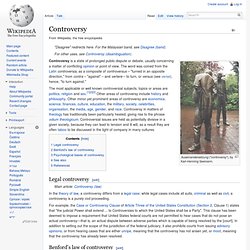 Controversy is a state of prolonged public dispute or debate, usually concerning a matter of conflicting opinion or point of view. The word was coined from the Latin controversia, as a composite of controversus – "turned in an opposite direction," from contra – "against" – and vertere – to turn, or versus (see verse), hence, "to turn against. " Legal controversy[edit] For example, the Case or Controversy Clause of Article Three of the United States Constitution (Section 2, Clause 1) states that "the judicial Power shall extend ... to Controversies to which the United States shall be a Party". This clause has been deemed to impose a requirement that United States federal courts are not permitted to hear cases that do not pose an actual controversy—that is, an actual dispute between adverse parties which is capable of being resolved by the [court]. Bias.

Bias is an inclination of temperament or outlook to present or hold a partial perspective, often accompanied by a refusal to consider the possible merits of alternative points of view. 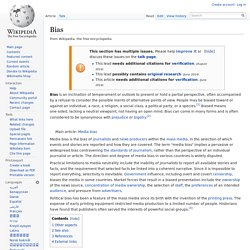 People may be biased toward or against an individual, a race, a religion, a social class, a political party, or a species.[1] Biased means one-sided, lacking a neutral viewpoint, not having an open mind. Bias can come in many forms and is often considered to be synonymous with prejudice or bigotry.[2] Media bias is the bias of journalists and news producers within the mass media, in the selection of which events and stories are reported and how they are covered. The term "media bias" implies a pervasive or widespread bias contravening the standards of journalism, rather than the perspective of an individual journalist or article. The direction and degree of media bias in various countries is widely disputed. Other aspects[edit] See also[edit] References[edit] Consensus theory. Consensus theory is a social theory that holds that a particular political or economic system is a fair system, and that social change should take place within the social institutions provided by it. 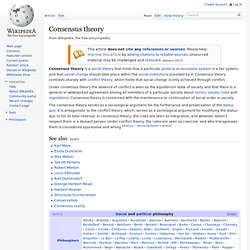 Consensus theory contrasts sharply with conflict theory, which holds that social change is only achieved through conflict. The consensus theory serves as a sociological argument for the furtherance and preservation of the status quo. Citizen news: A democratic addition to political journalism. Editor’s note: Herbert Gans is one of America’s preeminent sociologists, and some of his most notable work has come in examining the American news industry. 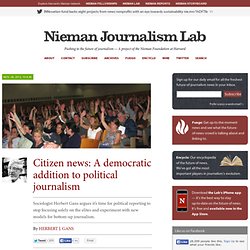 His seminal 1979 book Deciding What’s News: A Study of CBS Evening News, NBC Nightly News, Newsweek and Time was born out of years spent in newsrooms, watching how the never-ending flood of human activity was distilled into the news. Here he argues for a new area of emphasis in political reporting for a democratic society — what he calls citizen news. Journalism and the news media are supposed to be a bulwark for democracy. But through their history, they have more often served as messengers for the high-level public officials whose actions and pronouncements they report regularly. Political news has not paid much attention to the citizenry. True, citizens — like the 127 million Americans who voted this month, and the approximately 100 million who didn’t — may not always seem particularly newsworthy. Journalism and the citizenry. Citizen journalism at work: Unemployed British man becomes Syrian weapons expert. While some traditional journalists may not like the term, we’ve seen a growing number of examples of “citizen journalism” emerge that make it obvious how powerful that phenomenon has become — from the Pakistani programmer who live-tweeted the Osama bin Laden raid and the network of Twitter followers Andy Carvin of NPR used as a real-time newsroom to Reddit’s reporting on a mass shooting in Colorado. 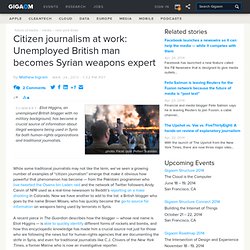 Now we have another to add to the list: a British blogger who goes by the name Brown Moses, who has quickly become the go-to source for information on weapons being used by terrorists in Syria. A recent piece in The Guardian describes how the blogger — whose real name is Eliot Higgins — is able to quickly identify different forms of rockets and bombs, and how this encyclopedic knowledge has made him a crucial source not just for those who are following the news but for human-rights agencies that are documenting the strife in Syria, and even for traditional journalists like C.J.