Materials for Two Theories: TIMN and STA-C: TIMN in 20 minutes: a video presentation. Here’s a video that offers an overview about the TIMN framework, its system dynamics, and some future implications. 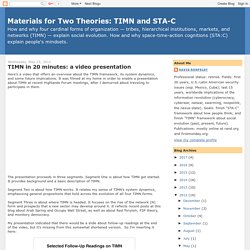 Why Bad Behavior is Almost Always Good Politics. Most great thinkers have speculated about the kind of leadership that might give rise to a better society, analyzing it through what’s sometimes called a “normative” lens: What should we be doing? 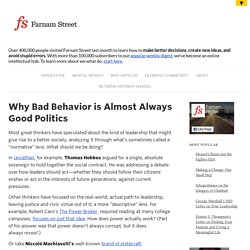 In Leviathan, for example, Thomas Hobbes argued for a single, absolute sovereign to hold together the social contract. He was addressing a debate over how leaders should act—whether they should follow their citizens’ wishes or act in the interests of future generations, against current pressures. Startups be warned: Something weird happens to companies when they hit 150 people — Quartz. The dynamics of companies change fundamentally when they exceed roughly 150 people, in ways that startup founders can struggle to address. 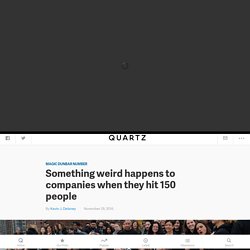 “It’s one of the magic numbers in group sizes,” contends Facebook chief product officer Chris Cox, who joined in 2005 when the internet company had fewer than 100 employees. “I’ve talked to so many startup CEOs that after they pass this number, weird stuff starts to happen,” Cox said at the Aspen Ideas Festival this summer. “The weird stuff means the company needs more structure for communications and decision-making.” An online collaborator’s handbook: What it takes to get a group working online. : Indaba. I’d like to have a conversation about how online collaboration works, based on some things we learned while building the Indaba fieldwork platform, a tool for organizations that use distributed teams to collect data or write reports. 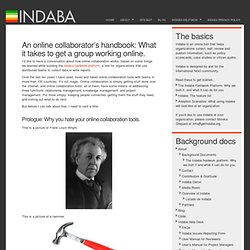 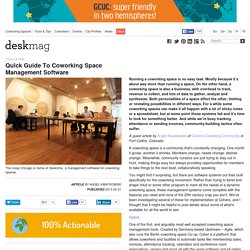 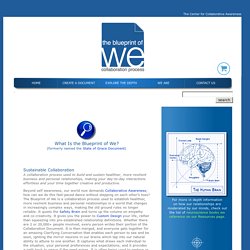 (formerly named the State of Grace Document) Sustainable Collaboration A collaboration process used to build and sustain healthier, more resilient business and personal relationships, making your day-to-day interactions effortless and your time together creative and productive. Beyond self awareness, our world now demands Collaborative Awareness; how can we do this fast-paced dance without stepping on each other’s toes? The Blueprint of We is a collaboration process used to establish healthier, more resilient business and personal relationships in a world that changes in increasingly complex ways, making the old ground rules no longer reliable. 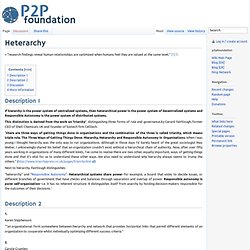 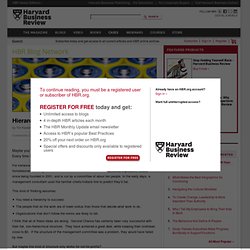 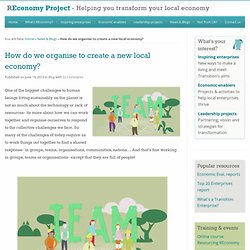 One of the biggest challenges to human beings living sustainably on the planet is not so much about the technology or lack of resources- its more about how we can work together and organise ourselves to respond to the collective challenges we face. So many of the challenges of today require us to work things out together to find a shared response- in groups, teams, organisations, communities, nations…. And that’s fine working in groups, teams or organisations- except that they are full of people! So many social change groups and organisations who try and do things like create a more sustainable, resilient and equitable local economic system come up against the challenges of working together.

Holacracy. Holacracy = An organizational governance system developed by Brian Robertson through incremental testing in his software company Ternary Software, in the early 2000's. 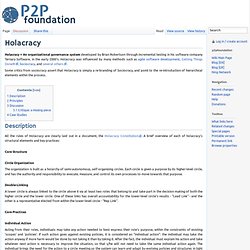 Holacracy was influenced by many methods such as agile software development, Getting Things Done®, Sociocracy, and several others. Beyond the Holacracy Hype. It was a Thursday afternoon in Las Vegas. Five employees were camped out in a team room at Zappos, the largest company so far to implement holacracy—a form of self-management that confers decision power on fluid teams, or “circles,” and roles rather than individuals. On this particular day, in May 2015, the circle charged with overseeing holacracy’s adoption was questioning the method’s effectiveness. A couple of months earlier, Zappos CEO Tony Hsieh had offered severance packages to all employees for whom self-management was not a good fit—or who wished to leave for any other reason.

Although most decided to stay, 18% took the package, with 6% citing holacracy. In exit interviews and surveys, the 6% shared their concerns. Our research and experience tell us that elements of self-organization will become valuable tools for companies of all kinds. How It Works.

Distributed Authority Holacracy is a distributed authority system – a set of “rules of the game” that bake empowerment into the core of the organization. Unlike conventional top-down or progressive bottom-up approaches, it integrates the benefits of both without relying on parental heroic leaders. Everyone becomes a leader of their roles and a follower of others’, processing tensions with real authority and real responsibility, through dynamic governance and transparent operations. Related reading: Blog post: Empowerment is Dead; Long Live Empowerment Related reading: The Holacracy Constitution: the actual rules of Holacracy Processing Tensions.

Holacracy Introduction Webinar 2012-10-03. Social Technology for Purposeful Organization. Differentiating Organization & Tribe. Editor's note: this blog post is an excerpt of the upcoming Holacracy book. It compiles ideas and stories about the previously discussed distinction between organizational and cultural spaces.

Horizontalism and Territory. Horizontal social relationships and the creation of new territory, through the use of geographic space, are the most generalized and innovative of the experiences of the Occupy movement. What we have been witnessing across the United States since September 17th is new in a myriad of ways, yet also, as everything, has local and global antecedents. In this essay I will describe these two innovations, and ground them in the more recent past, specifically in the global south in Argentina. Brazil uprising points to rise of leaderless networks - life - 26 June 2013. BRAZILIANS are calling the protests sweeping through their country the Salad Uprising after police began arresting people carrying vinegar as a remedy for tear gas. The name could be more apt than protesters realise: uprisings of this sort could also have food links. But they spread like a disease. Brazil's uprising came "totally out of the blue", says Marcus de Aguiar at the University of Campinas in São Paulo, Brazil.

Why Employees Prefer Management Hierarchies. Simon Sinek: Why Leaders Eat Last. Fear and Guilt Cultures. Co-opoly: The Game of Co-operatives - The Toolbox for Education and Social Action. Order Co-opoly in the UK In Co-opoly: The Game of Cooperatives, players collaborate to found and run a democratic business. In order to survive as individuals and to strive for the success of their co-op, players make tough choices regarding big and small challenges while putting their teamwork abilities to the test.

This is an exciting game of skill and solidarity, where everyone wins – or everybody loses. Nomic.net: home of nomic stuff. Class Struggle Board Game Rules < DIALECTICAL MARXISM: The Writings of Bertell Ollman.