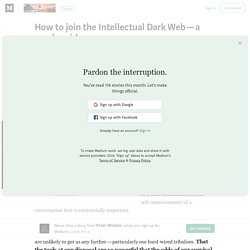 Social Paradoxes and Meta-Problems – The Abs-Tract Organization. “From the Greek para, against or counter to, and doxa, opinion or belief, a paradox is an idea that contradicts a more generally accepted idea, on purpose.” — The Paradox of Knowledge and Power, Keenan (1987) “Social paradox is a pervasive, continuing dilemma between incompatible yet interdependent activities (i.e. between regulators and the regulated). This goes beyond the usual ideas of conflict or game theory… social paradox forms a “wicked” class of challenges that cannot be finally solved — “at best they are resolved, over and over again.”” — Towards a Concept of Normative Incrementalism, Pava (1981) I would like to introduce the concept of a “social paradox” to address the current intractability of political discourse and social progress. Reinvent Everything – Emergent Culture. What Is Wirearchy ? – Wirearchy. Over the past 10+ years, ask thousands of people have asked me “what is wirearchy?” 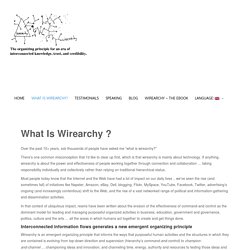 There’s one common misconception that I’d like to clear up first, which is that wirearchy is mainly about technology. If anything, wirearchy is about the power and effectiveness of people working together through connection and collaboration … taking responsibility individually and collectively rather than relying on traditional hierarchical status. Most people today know that the Internet and the Web have had a lot of impact on our daily lives .. we’ve seen the rise (and sometimes fall) of initiatives like Napster, Amazon, eBay, Dell, blogging, Flickr, MySpace, YouTube, Facebook, Twitter, advertising’s ongoing (and increasingly contentious) shift to the Web, and the rise of a vast networked range of political and information-gathering and dissemination activities. Our future is networked and feminine. TIMN is an explanatory model of how human societies have organized: first in Tribes, later with Institutions added (T+I), and in our current society where Markets dominate (T+I+M). 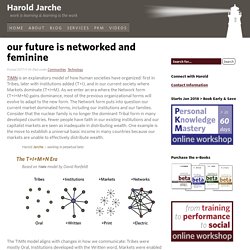 As we enter an era where the Network form (T+I+M+N) gains dominance, most of the previous organizational forms will evolve to adapt to the new form. The Network form puts into question our current market dominated forms, including our institutions and our families. Consider that the nuclear family is no longer the dominant Tribal form in many developed countries. Fewer people have faith in our existing institutions and our capitalist markets are seen as inadequate in distributing wealth.

One example is the move to establish a universal basic income in many countries because our markets are unable to effectively distribute wealth. Where microaggressions really come from: A sociological account. I just read the most extraordinary paper by two sociologists — Bradley Campbell and Jason Manning — explaining why concerns about microaggressions have erupted on many American college campuses in just the past few years. 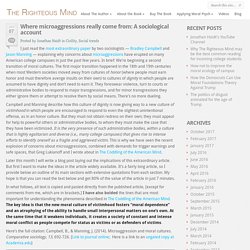 Yuval Noah Harari: Nationalism vs. globalism: the new political divide. Positive Thinking in a Dark Age. The Serendipity of Streams. A stream is simply a life context formed by all the information flowing towards you via a set of trusted connections — to free people, ideas and resources — from multiple networks. 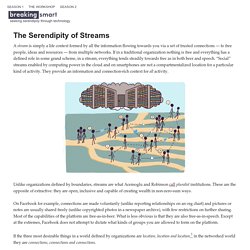 If in a traditional organization nothing is free and everything has a defined role in some grand scheme, in a stream, everything tends steadily towards free as in both beer and speech. “Social” streams enabled by computing power in the cloud and on smartphones are not a compartmentalized location for a particular kind of activity. They provide an information and connection-rich context for all activity. Unlike organizations defined by boundaries, streams are what Acemoglu and Robinson call pluralist institutions. These are the opposite of extractive: they are open, inclusive and capable of creating wealth in non-zero-sum ways. In the land of the free, interdependence undermines Americans' motivation to act. Public campaigns that call upon people to think and act interdependently may undermine motivation for many Americans, according to new research published in Psychological Science, a journal of the Association for Psychological Science. 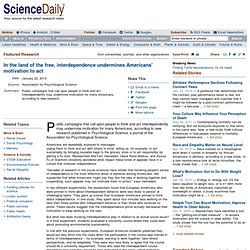 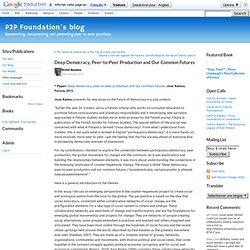 Emergence of Noopolitik. The Power of Power Laws. Future Perfect. What is a “peer progressive”? 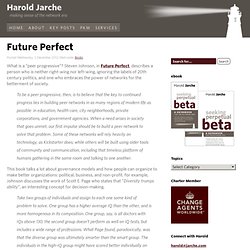 Steven Johnson, in Future Perfect, describes a person who is neither right-wing nor left-wing, ignoring the labels of 20th century politics, and one who embraces the power of networks for the betterment of society. To be a peer progressive, then, is to believe that the key to continued progress lies in building peer networks in as many regions of modern life as possible: in education, health care, city neighborhoods, private corporations, and government agencies.

When a need arises in society that goes unmet, our first impulse should be to build a peer network to solve that problem. Some of these networks will rely heavily on technology, as Kickstarter does; while others will be built using older tools of community and communication, including that timeless platform of humans gathering in the same room and talking to one another. Take two groups of individuals and assign to each one some kind of problem to solve. Collective Intelligence and Collective Leadership: Twin Paths to Beyond Chaos. 'Peer Progressives': Steven Johnson. Spy Kids - By Charles Stross. In the 21st century, the U.S. 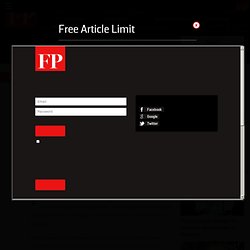 National Security Agency (and other espionage agencies) face a storm of system-wide problems that I haven't seen anybody talking about. The problems are sociological, and they threaten to undermine the way the Western security state operates. The big government/civil service agencies are old. The New Economy. Liquid Democracy. What is New Mutualism? It’s the little choices that matter. 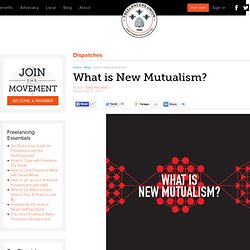 Do you set up your own home office or join a co-working community? Shop at a chain grocery store or a local food co-op? Bank or credit union? We all face these decisions every day. The choice is deceptively simple -- go it alone or build something together. Mutual aid. Metadesign. The Rise of Post-Familialism: Humanity's Future? Appearing in: Special Report. Www.census.gov/prod/2013pubs/p20-570.pdf. U.S. Birth Rate Hit Historic Low. Americans had fewer babies in 2011 than in any year before, according to an annual summary of vital statistics. In 2011, 3,953,593 babies were born in the U.S. -- 1% fewer than in 2010 and 4% fewer than in 2009, according to Brady Hamilton, PhD, of the CDC in Atlanta, and colleagues at the agency and the Johns Hopkins Bloomberg School of Public Health.

That number, combined with population data, yielded a crude birth rate of 12.7 per 1,000 people, the lowest rate ever reported for the nation, they reported online and in the March 2013 issue of Pediatrics. The general fertility rate -- defined as the number of births per 1,000 women ages 15 through 44 -- also fell by 1%, to a record low of 63.2 in 2011, down from 64.1 in 2010. But the declines were not uniform according to age, the authors pointed out. The birth rate among all teenagers (ages 15-19) fell by 8% from 2010 to 2011, reaching a historic low of 31.3 births per 1,000 women. The Next America. By Paul Taylor Published April 10, 2014 Two Dramas in Slow Motion. Www.worldvaluessurvey.org/wvs/articles/folder_published/article_base_54. This map reflects the fact that a large number of basic values are closely correlated; they can be depicted in just two major dimensions of cross-cultural variation. ** Update ** Added supplementary data file.

Socrata Open Data Solutions for Data Transparency. Can independent and interdependent self coexist? Comparisons of Self-concept between the Hans and the aborigines in Taiwan. RSA Animate - 21st century enlightenment.