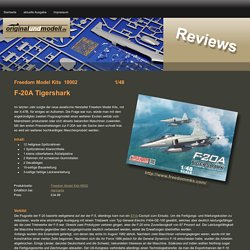 Freedom Model Kits 1:48 F-20A Tigershark Review. Background Initially known as the F-5G, the F-20 Tigershark was a company-funded project offering an 80% increase in thrust for a minimum weight penalty. 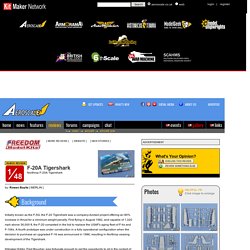 First flying in August 1982, and capable of 1,320 mph above 36,000 ft, the F-20 competed in the bid to replace the USAF's aging fleet of F-4s and F-106s. A fourth prototype was under construction in a fully operational configuration when the decision to purchase an upgraded F-16 was announced in 1986, resulting in Northrop ceasing development of the Tigershark. Freedom Models 18002 1/48 F-20A Tigershark Kit First Look. The Modelling News: Gary Reviews Freedom Model Kits 1/48th scale F-20A Tigershark. Gary Wickham has already presented on of the kits from Freedom models with his X-47B build recently. 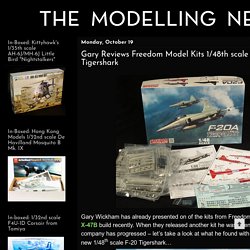 When they released another kit he was keen to see how this new company has progressed – let’s take a look at what he found with their latest kit – the new 1/48th scale F-20 Tigershark… Review: F-20A TIGER SHARK Freedom Model Kits New tool initial release Kit No# FD18002 1/48th scale Available from Freedom Modeller’s Distributors Worldwide Price ¥6,210/ USD $52.01/ €45.83 from Hobbylink Japan. Tanmodel 2201 1/48 RF-84F Thunderflash Kit Build Review. Build Review For a look at this kit out of the box, look here. 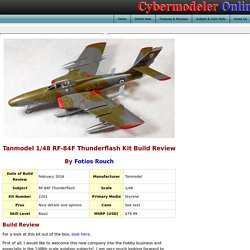 First of all, I would like to welcome this new company into the hobby business and especially in the 1/48th scale aviation subjects! I am very much looking forward to TANMODEL doing other similar subjects that are of interest to the Turkish Air Force such as the T-37 (that nobody seems to have enough brains to realize how much it was used around the world), maybe a TF-102, a T-41, etc. Republic RF-84F Thunderflash - 1:48 TanModel - Kits. Republic RF-84F Thunderflash1:48 TanModel The Republic F-84F was essentially a new aircraft, however due to budget issues it was promoted as a development of the straight winged F-84E. 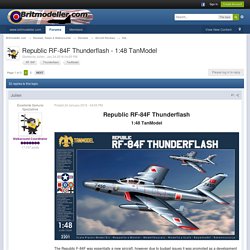 The original XF-96A was the last F-84E fitted with a swept wing but it was found that performance over the straight winged airframe was marginal at best. However at the time it was ordered into production with the hope that the J65 engine (a licence built Armstrong Siddeley Sapphire) would improve performance. Adoption of this engine saw the fuselage stretched vertically creating an oval cross section. Republic RF-84F Thunderflash, Tanmodel 2201 (2015) Facts Decal options The markings supplied are as follows: Product timeline The history of this Republic F-84F Thunderstreak-kit in scale 1:48 visualised on the product timeline. 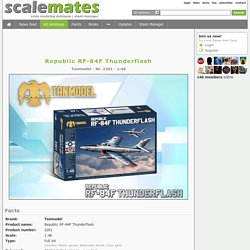 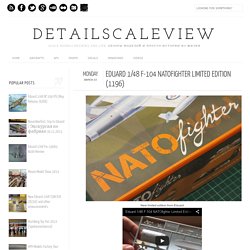 Those usually include plastic from other companies plus resin and PE from Eduard itself. Moreover, they spice it up with interesting marking options and decals printed in Italian Cartograf. Well, today we'll check another Limited Edition which should be already available for the purchase. Я думаю, многие согласятся с заявлением, что у компании Eduard выходят интересные наборы в ограниченных сериях. This is new NATOfighter release which follows the same concept as previous one, which was called as Bundesfighter, and you can read full review on our website here. Новинка называется NATOfighter и основана вокруг той же идеи, что и предыдущая версия, которая называлась Bundesfighter, ее полный обзор вы можете прочитать на нашем сайте здесь. You can have an even more detailed look in Bundesfighter review, because parts are approximately the same.

There are two large decal sheets. In-Box Review: NATO fighter by Andy Brazier. History The development of the F-104 Starfighter was launched by the Lockheed company at the very beginning of the 50s, inspired by Korean War experience. 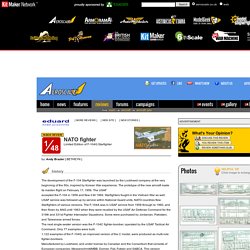 The prototype of the new aircraft made its maiden flight on February 17, 1956. The USAF accepted the F-104 in 1958 and flew it till 1969. Starfighters fought in the Vietnam War as well. NATO fighter, Eduard 1196. Limited Edition Eduard - Nr. 1196 Facts Decal options This product contains markings to depict following versions: 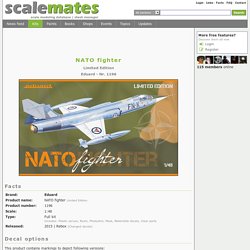 Eduard 1/48 F-104G Bundesfighter (1195) Eduard 1196 1/48 F-104G NATO Fighter Kit First Look. First Look Less than five years after Chuck Yeager broke the sound barrier, Clarence 'Kelly' Johnson was looking at the first combat experience between jet fighters over the skies of Korea and understood the need for an aircraft that could reach high altitude and affect a high-speed intercept to achieve and maintain air superiority. 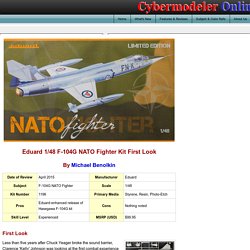 His revolutionary Model 83 was designed to meet that need and was submitted to the USAF as an unsolicited proposal. The Air Force agreed with the need, but decided to seek other ideas from industry. Designs were submitted by Republic and North American, but a cautious Air Force staff opted for the Lockheed design. The F-104 was born. The F-104G was produced as a multi-role fighter for operations in Belgium, Germany, Holland, and Italy, with each of these countries producing a combined total of over 1000 airframes. Bundesfighter, Eduard 1195 (2015) Facts Decal options This product contains markings to depict following versions: HobbyBoss. HobbyBoss. 1/48. WIP Me262.

Messerschmitt Me 262 A-1a/U1, Hobby Boss 80370. Facts Product timeline. WIP Me262. Hasegawa 1/48 F-16C Fighting Falcon Black Knights Limited Edition. Republic of Singapore Air Force standouts The Republic of Singapore Air Force is unlike the Air Force of any other nation in that the aircraft of the RSAF can cross the entire landmass of their nation in just thirteen minutes. Without the benefit of large maneuvering areas, any attack on Singapore or its airspace has to be shut down immediately or the war is lost. Possibly because of that fact, Singapore maintains one of the most highly trained and well equipped militaries in the world.

Tarangus and MPM announces the first test shots of of the forthcoming Saab 37 Viggen in 1/48 scale! “The Viggen is an iconic aircraft which has been somewhat neglected from a modeling perspective. There hasn’t been a new kit for at least 30 years”, says Fredrik Zetterberg from Tarangus. “We had considered making the Viggen for some time when we were approached by Tarangus”, says Jiri Silhanek, CEO of MPM, “it was just a golden opportunity for both companies.” MPM is a well known brand for modelers worldwide, having produced many classic kits with an ever improving quality for many years. Tarangus will release the first version, the JA 37 fighter version, in the first months of 2014.

The kit is designed using the same CAD system used by Airbus and thus ensures a perfect fit of the parts. “We’re very happy to work with MPM on this kit. Internet Modeler Latest News from Tarangus. För svensk översättning, se nedan. New Saab Safir in 1/48 scale! Tarangus releases a Saab Safir in 1/48 scale in July. The Saab Safir has never before been made in this scale, which may seem a little odd as it's one of the most sold airplanes Saab has ever made. The Safir served in the Swedish, Norwegian, Austrian, Finnish and Ethiopian air forces among others, but also found its way to the flight schools of Lufthansa and KLM, just to name a few. ÉÏº£Ê¨Èð¹¤ÒÕÄ£ÐÍÓÐÏÞ¹«Ë¾ SHANGHAI LION ROAR ART MODEL CO.,LTD.