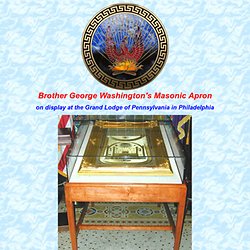 A short note, currently framed with the apron, was presented, reading: To the Washington Benevolent Society. Brother Washington's Masonic Apron - Masonic Library and Museum. The affection each man held for the other is legendary. 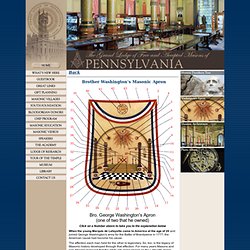 So, too, is the legacy of Masonic history developed through that affection. For many years Masons and non-Masons believed that the white silk apron known as the Lafayette Apron, had been embroidered by Madame Lafayette and presented to Bro. George Washington by Bro. Lafayette in August of 1784. This cannot be documented as fact. Freemasonry. Freemasonry is a fraternal organisation that traces its origins to the local fraternities of stonemasons, which from the end of the fourteenth century regulated the qualifications of masons and their interaction with authorities and clients. 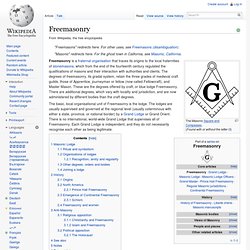 The degrees of freemasonry, its gradal system, retain the three grades of medieval craft guilds, those of Apprentice, journeyman or fellow (now called Fellowcraft), and Master Mason. These are the degrees offered by craft, or blue lodge Freemasonry. There are additional degrees, which vary with locality and jurisdiction, and are now administered by different bodies than the craft degrees. The basic, local organisational unit of Freemasonry is the lodge. The lodges are usually supervised and governed at the regional level (usually coterminous with either a state, province, or national border) by a Grand Lodge or Grand Orient. Masonic Lodge Palazzo Roffia, Lodge in Italy set out for French (Moderns) ritual. Www.masonicdictionary.com. The 47th Problem of Euclid. A Symbol of Geometry; of exact science. 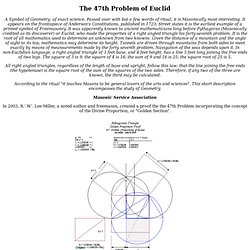 Passed over with but a few words of ritual, it is Masonically most interesting. It appears on the frontispiece of Anderson's Constitutions, published in 1723; Street states it is the earliest example of a printed symbol of Freemasonry. It was apparently known to ancient mathematicians long before Pythagoras (Masonically credited as its discoverer) or Euclid, who made the properties of a right angled triangle his forty-seventh problem. It is the root of all mathematics used to determine an unknown from two knowns. 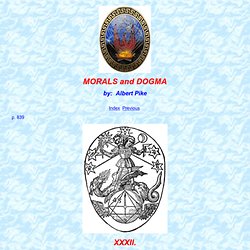 Mckaig. Freemasonry: The Great Cross and the End of Time. I had originally posted this last January (2009). 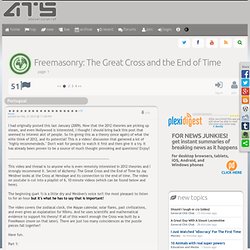 Now that the 2012 theories are picking up steam, and even Hollywood is interested, I thought I should bring back this post that seemed to interest alot of people. So I'm giving this as a theory (once again) of what the elite think of 2012, and its potential! This is a video/ discussion that garnered a lot of "highly recommendeds. " Don't wait for people to watch it first and then give it a try. It has already been proven to be a source of much thought provoking and questions! This video and thread is to anyone who is even remotely interested in 2012 theories and I strongly recommend it.

The beginning (part 1) is a little dry and Weidner's voice isn't the most pleasant to listen to for an hour but it's what he has to say that is important! The video covers the zodiacal clock, the Mayan calendar, solar flares, past civilizations, and even gives an explanation for Nibiru. Have fun. Part 1: Part 2: Part 3: Part 4: Part 5: Part 6: Also!! Nüwa and Fuxi in Chinese Mythology: Compass &amp; Square - NothingWavering.org - LDS & Mormon Blog Portal. An ancient painting of Nüwa and Fuxi unearthed in Xinjiang, holding the tools of creation - compass and square. 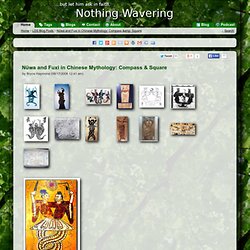 Hugh Nibley gave a lecture in 1975 on “Sacred Vestments” which was later transcribed and included in the collected works volume Temple and Cosmos (pgs. 91-132). The entire paper is fascinating, and highly recommended reading. One of the things he wrote about were certain Chinese artifacts which had been found depicting two mythological gods, Nüwa and Fuxi, and the tools they hold: Most challenging are the veils from Taoist-Buddhist tombs at Astana, in Central Asia, originally Nestorian (Christian) country, discovered by Sir Aurel Stein in 1925… We see the king and queen embracing at their wedding, the king holding the square on high, the queen a compass. University of Bradford : Web of Hiram. This website began when Dr Robert Lomas of the University's School of Management, decided to create an electronic database of the Masonic material held in many of the University's Special Collections as part of his on-going research into the cultural origin of scientific ideas. 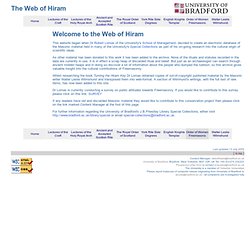 As other material has been donated to this work it has been added to the archive. None of the rituals and statutes recorded in the data are currently in use. It is in effect a scrap heap of discarded ritual and belief. But just as an archaeologist can search through ancient midden heaps and in doing so discover a lot of information about the people who dumped the rubbish, so this archive gives valuable insight into the cultural contributions of Freemasonry.