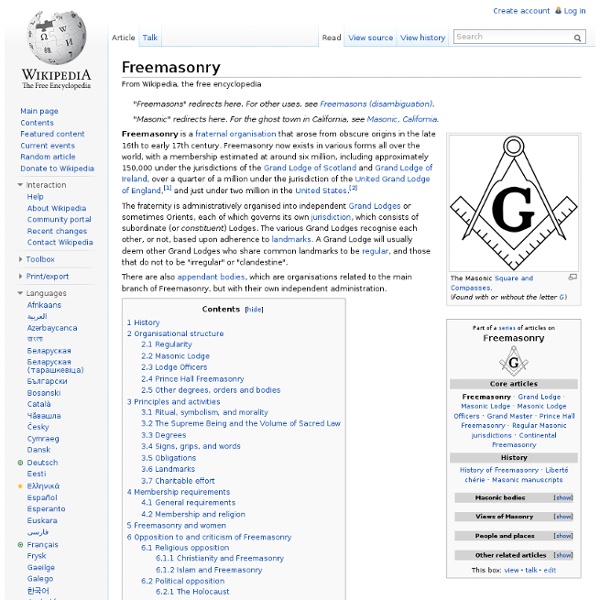 Freemasonry is a fraternal organisation that traces its origins to the local fraternities of stonemasons, which from the end of the fourteenth century regulated the qualifications of masons and their interaction with authorities and clients. The degrees of freemasonry, its gradal system, retain the three grades of medieval craft guilds, those of Apprentice, journeyman or fellow (now called Fellowcraft), and Master Mason. These are the degrees offered by craft, or blue lodge Freemasonry. There are additional degrees, which vary with locality and jurisdiction, and are now administered by different bodies than the craft degrees. The basic, local organisational unit of Freemasonry is the lodge. The lodges are usually supervised and governed at the regional level (usually coterminous with either a state, province, or national border) by a Grand Lodge or Grand Orient. Masonic Lodge Palazzo Roffia, Lodge in Italy set out for French (Moderns) ritual Ritual and symbolism Organisations of lodges

Brother Washington's Masonic Apron - Masonic Library and Museum The affection each man held for the other is legendary. So, too, is the legacy of Masonic history developed through that affection. For many years Masons and non-Masons believed that the white silk apron known as the Lafayette Apron, had been embroidered by Madame Lafayette and presented to Bro. Brain scans predict which criminals are more likely to reoffend Doug Menuez/Getty Activity in a particular region of the cortex could tell whether a convict is likely to get in trouble again. In a twist that evokes the dystopian science fiction of writer Philip K. Dick, neuroscientists have found a way to predict whether convicted felons are likely to commit crimes again from looking at their brain scans. Convicts showing low activity in a brain region associated with decision-making and action are more likely to be arrested again, and sooner.

Bohemian Grove Coordinates: Bohemian Grove is a 2,700-acre (1,100 ha) campground located at 20601 Bohemian Avenue, in Monte Rio, California, belonging to a private San Francisco-based men's art club known as the Bohemian Club. In mid-July each year, Bohemian Grove hosts a two-week, three-weekend encampment of some of the most powerful men in the world.[1][2] Introduction[edit] Aleister Crowley After an unsuccessful attempt to climb Kanchenjunga and a visit to India and China, Crowley returned to Britain, where he attracted attention as a prolific author of poetry, novels, and occult literature. In 1907, he and George Cecil Jones co-founded a Thelemite order, the A∴A∴, through which they propagated the religion. After spending time in Algeria, in 1912 he was initiated into another esoteric order, the German-based Ordo Templi Orientis (OTO), rising to become the leader of its British branch, which he reformulated in accordance with his Thelemite beliefs.

Lawrence Summers Lawrence Henry "Larry" Summers (born November 30, 1954) is an American economist who is President Emeritus and Charles W. Eliot University Professor of Harvard University.[2] Born in New Haven, Connecticut, Summers became a professor of economics at Harvard University in 1983. He left Harvard in 1991, working as the Chief Economist at the World Bank from 1991 to 1993. In 1993, Summers was appointed Undersecretary for International Affairs of the United States Department of the Treasury under the Clinton Administration.

Nazism and occultism The origins of Nazism and its relation to the occult has been a part of popular culture since at least 1959. There are documentaries and books on the topic, including The Morning of the Magicians (1960) and The Spear of Destiny (1972). Historian Nicholas Goodrick-Clarke analyzed the topic in The Occult Roots of Nazism in which he argued cautiously for some real links between some ideals of Ariosophy and Nazi ideology. www.masonicdictionary.com Of the five human senses, the three which are the most important in Masonic symbolism are Seeing, Hearing, and Feeling, because of their respective reference to certain modes of recognition, and because, by their use, Freemasons are enabled to practice that universal language the possession of which is the boast of the Order. - Source: Mackey's Encyclopedia of Freemasonry Four is the tetrad or Quaternary of the Pythagoreans! and it is a sacred number in the advanced Degrees.

DARPA Wearable Tech Suit Could Help Soldiers Run a 4-Minute Mile A quick Google search of “Warrior Web” — a program of the Defense Advanced Research Projects Agency — shows images that appear to be from a science-fiction movie, not a government program. What began nearly three years ago as an effort to create lightweight, exoskeleton suits to help reduce soldier injuries is showing promising results, according to DARPA. The agency says initial prototypes have undergone rigorous evaluation at the Soldier Performance and Equipment Advanced Research Facility at Aberdeen Proving Ground, Md. DARPA teamed with scientists from the Army Research Laboratory Human Research and Engineering Directorate to test nine prototype Warrior Web systems on soldiers during the first phase of the program, according to a May 5 news release.

United Nations The United Nations (UN) is an intergovernmental organization established on 24 October 1945 to promote international co-operation. A replacement for the ineffective League of Nations, the organization was created following the Second World War to prevent another such conflict. At its founding, the UN had 51 member states; there are now 193. The UN Headquarters is situated in Manhattan, New York City and enjoys extraterritoriality. Further main offices are situated in Geneva, Nairobi and Vienna. The organization is financed by assessed and voluntary contributions from its member states.

Thule Society The Thule Society (/ˈθjuːliː/; German: Thule-Gesellschaft), originally the Studiengruppe für germanisches Altertum ("Study Group for Germanic Antiquity"), was a German occultist and völkisch group in Munich, named after a mythical northern country from Greek legend. The Society is notable chiefly as the organization that sponsored the Deutsche Arbeiterpartei (DAP), which was later reorganized by Adolf Hitler into the National Socialist German Workers' Party (NSDAP or Nazi Party). Origins[edit] Beliefs[edit] A primary focus of Thule-Gesellschaft was a claim concerning the origins of the Aryan race.

The 47th Problem of Euclid A Symbol of Geometry; of exact science. Passed over with but a few words of ritual, it is Masonically most interesting. It appears on the frontispiece of Anderson's Constitutions, published in 1723; Street states it is the earliest example of a printed symbol of Freemasonry.