The Iranian Atheist. I'm an Iraqi Veteran (I deployed in 2010) and current events in Iraq are both frustrating and terrifying to me. 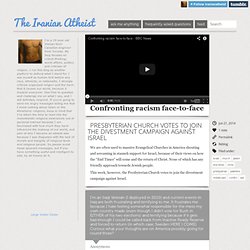 It frustrates me because I hate feeling somewhat responsible for the mess my own country made (even though I didn't vote for Bush in EITHER of his two elections) and terrifying because if it gets bad enough I could be called back from Inactive Ready Reserve and forced to return (in which case, Sweden HERE I COME) Curious what your thoughts are on America possibly going for round three? Well, hopefully there will not be another round, we can just be optimistic that this situation can be resolved. But it’s not going to happen if the warmongering greedy millionaires like Cheney’s and the Rumsfeld’s keep pushing their false hateful agenda forward for their own personal gains. These freaks need to stand up and finally admit that they have blood on their hands. So many innocent American lives, so many more innocent Iraqi lives have been lost as a result. Skeptical Avenger.

Rid of Religion. The context matters, because the meaning of EVERY one of those signs changes. 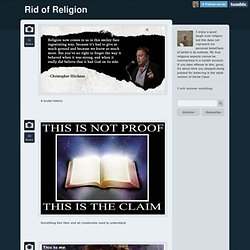 For example, Exodus 21:7 is referring to a particular type of arranged marriage before the terminology for an arranged marriage even arose. There are several stipulations for it listed in Leviticus. Psalms 137:9 is from a passage about revenge taken against a people who had previously done such to the Jews. The bit in 1 Timothy was written by Paul. Memes of Reason. Mmcelhaney: There is no condoning nor commanding of genocide or psychological abuse in the Bible.

Like it or not, there is a right way and a wrong way to think. Without being born-again, none of us thinks correctly at all. And after that we still have to watch ourselves.natskep: Atheist lolz. A tumblr for lols related to atheism/skepticism/free-thinking/humanism/science. 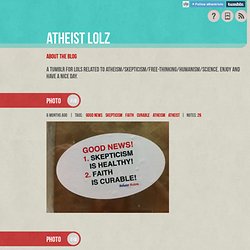 Untitled. Faces of Atheists. The Yorkshire Atheist. Atheists' Confessions. Bella Godless. Free Thinkers and the like. Screw Faith, Believe in Yourself. Atheist Assessment. Logic. Atheism. My little atheist life ☁ Silly Religion. An Athiestic View. This is a Godless place. The Atheist Next Door. Fairy Tales For Adults. Is there a god yet?

NatSkep. Atheism, fuck yeah! Atheism101. The A Word. Confronting Babble-On. "Candace Gorham, a licensed counselor and member of The Clergy Project, said she was ordained as a prophetess and evangelist at 18 years old in a store-front Pentecostal church that she described as extreme. 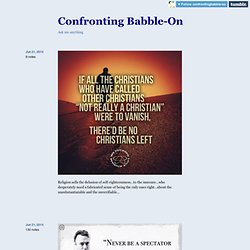 She later joined a prosperity gospel preaching mega-church, and abandoned Christianity altogether after moving to Bermuda and encountering a series of personal trials. Dan Barker videos on YouTube “built the coffin” for her belief and Bart D. Ehrman’s book on how the Bible was constructed “nailed the final nail” into it, she said. Philosopher and author Rebecca Goldstein (Plato at the Googleplex: Why Philosophy Won’t Go Away and 36 Arguments for the Existence of God: A Work of Fiction) was raised in an Orthodox Jewish family that has become “progressively more fundie” over the generations, she said. Atheism blog. Oh Your God. I received this question on my Ask account ( —- “What is the difference of spirit and soul? 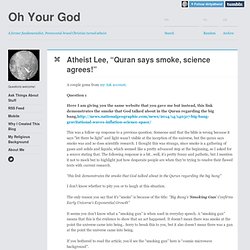 And in Christian faith, what is the role or part of the holy spirit for the holy trinity as god?” —- In Christianity, “spirit” typically refers to the holy spirit…at least it does in Pentecostal Christianity. For example, “gifts of the spirit” are gifts that one is believed to receive from the holy spirit. The soul is a non-physical, non-energy part of you that never dies, meaning it passes into an eternal afterlife once the body expires. Answering your second question will take a bit more patience, so please bear with me as this gets a little convoluted. Of course, it doesn’t make sense that an all-powerful, omnipresent being would require three distinct parts to do different tasks. Jews are strictly monotheistic and do not accept the concept of the trinity; this then means that the idea is one that came into the religion as part of the Jewish off-shoot cult we now know as Christianity.

Open your eyes and mind. Without gods. Hi, this is a place where I post pics and information that I enjoy and that makes me think or laugh. 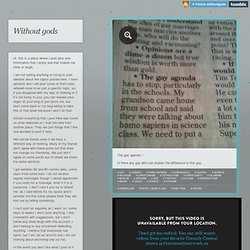 I am not selling anything or trying to start debates about the topics posted here. Atheist Cartoons. A two-hour debate between Sye Ten Bruggencate and Matt Dillahunty last week. 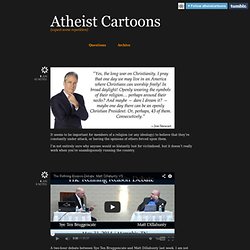 I am not recommending you watch it. This is a vanity post. Normally I don’t post this kind of thing, but I have personal experience of Sye, who uses the internet handle SyeTenB and may be familiar to you as the brains behind proofthatgodexists.org. Apart from new wallpaper, it looks exactly like it did in 2007, when I first came across it. Like Zeno’s Paradox, the argument seems to be profound, when in fact it’s gibberish. 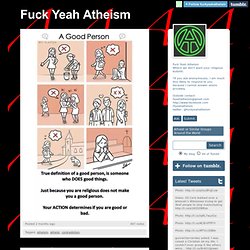 I couldn't ever grasp it like others were doing so I always felt alone or left out of this belief that I thought was supposed to bring you eternal happiness. It didn't. It gave me massive amounts anxiety and drove me to depression. Mr. Doe's Your Religion Is Fucked Up. Atheist's Blog. Proud Atheist. Proud Atheist My Favorite Links: Archive Ask me anything Submit September 9th, 2013 at 5:22AM. 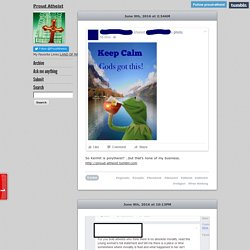