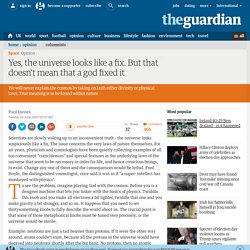 The issue concerns the very laws of nature themselves. For 40 years, physicists and cosmologists have been quietly collecting examples of all too convenient "coincidences" and special features in the underlying laws of the universe that seem to be necessary in order for life, and hence conscious beings, to exist. Why Are Less Intelligent People More Likely To Be Religious? Psychology Today: The key question, then, is why religious people are generally less intelligent. 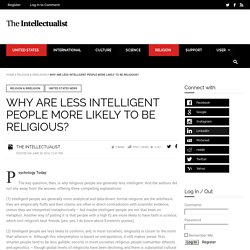 And the authors did not shy away from the answer, offering three compelling explanations: Kachetiendg: Vatican reeling as DNA tests show communion wafers contain 0% Christ. The Vatican is this morning facing a further crisis after routine DNA tests revealed that the communion wafers used in Sunday mass contain 0% of the body and blood of Christ. 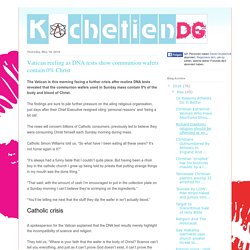 The findings are sure to pile further pressure on the ailing religious organisation, just days after their Chief Executive resigned citing ‘personal reasons’ and ‘being a bit old’. The news will concern billions of Catholic consumers, previously led to believe they were consuming Christ himself each Sunday morning during mass. Catholic Simon Williams told us, “So what have I been eating all these years? Kachetiendg: Retired priest: ‘Hell’ was invented by the church to control people with fear. This video is of an interview retired Episcopal bishop John Shelby Spong did with Keith Morrison of Dateline NBC back in August of 2006. 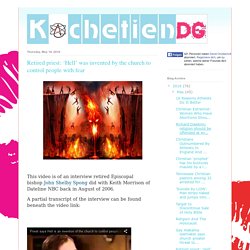 A partial transcript of the interview can be found beneath the video link: Spong: I don’t think Hell exists. By their works shall ye know them. If one were asked to prescribe the fundamental condition for a good world, it would be: peace and freedom for all, where "freedom" means personal autonomy and mental liberation from prejudice, superstition, ignorance and fear. 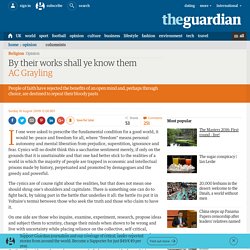 Cynics will no doubt think this a saccharine sentiment merely, if only on the grounds that it is unattainable and that one had better stick to the realities of a world in which the majority of people are trapped in economic and intellectual prisons made by history, perpetuated and promoted by demagogues and the greedy and powerful.

The cynics are of course right about the realities, but that does not mean one should shrug one's shoulders and capitulate. There is something one can do to fight back, by taking part in the battle that underlies it all: the battle (to put it in Voltaire's terms) between those who seek the truth and those who claim to have it. 1. Hitler and Atheism. Lawsuit Filed Against Brevard County (FL) After Officials Block Atheists from Giving Invocations. 'I Don’t Believe This Anymore': What It's Like to Leave Behind Abusive, Right-Wing Religion. Americans are leaving their religions at a faster rate than ever before, and that means more are looking for help with the transition. 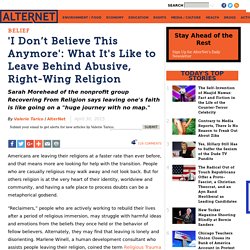 People who are casually religious may walk away and not look back. But for others religion is at the very heart of their identity, worldview and community, and having a safe place to process doubts can be a metaphorical godsend. “Reclaimers,” people who are actively working to rebuild their lives after a period of religious immersion, may struggle with harmful ideas and emotions from the beliefs they once held or the behavior of fellow believers. Alternately, they may find that leaving is lonely and disorienting. 15 Smartest Answers to the Put-Downs and Insults Thrown at Non-Believers. I’ve often wondered how the term “New Atheism” gained such currency. 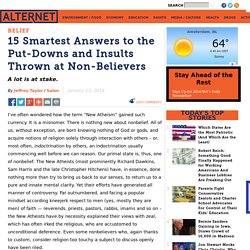 It is a misnomer. There is nothing new about nonbelief. All of us, without exception, are born knowing nothing of God or gods, and acquire notions of religion solely through interaction with others – or, most often, indoctrination by others, an indoctrination usually commencing well before we can reason. How I Figured Out Christianity is Not Real ~ ExChristian.Net. 11/11/2013 | Share this article: By Michael Runyan ~ My path out of Christianity began 30 years ago when I realized that evolution was a fact- that we evolved from very simple organisms that lived 4,000,000,000 years ago. 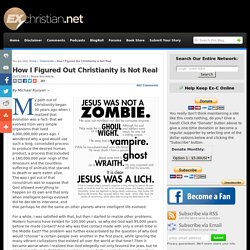 I wondered why a god would use such a long, convoluted process to produce the desired human product, a process that included a 160,000,000 year reign of the dinosaurs and the countless suffering of animals that starved to death or were eaten alive. 8 Awesome Atheist Leaders Who Aren't Richard Dawkins or Sam Harris. If you've read anything about the blossoming atheist movement, there's a good chance it was about Richard Dawkins or Sam Harris. 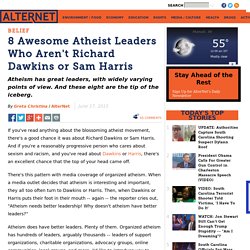 And if you're a reasonably progressive person who cares about sexism and racism, and you've read about Dawkins or Harris, there's an excellent chance that the top of your head came off. There's this pattern with media coverage of organized atheism. When a media outlet decides that atheism is interesting and important, they all too often turn to Dawkins or Harris. Then, when Dawkins or Harris puts their foot in their mouth -- again -- the reporter cries out, "Atheism needs better leadership! Why doesn't atheism have better leaders? " Two Kinds of Possible God. Although I am an atheist, I find it interesting to look at what kinds of god could possibly exist, according to both logic and the laws of physics. 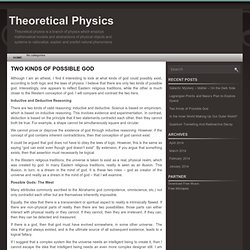 I believe that there are only two kinds of possible god. Interestingly, one appears to reflect Eastern religious traditions, while the other is much closer to the Western conception of god. Why I’m Not Quitting the Online Atheism Community - reply to Martin S.Pribble. Martin S.Pribble: Why i'm quitting the online atheism community. Photo by Creatas Images/Thinkstock This article is adapted from an essay that originally appeared on Martin Pribble’s personal blog.

Saudi Arabia declares all atheists are terrorists in new law to crack down on political dissidents - Middle East. Saudi Arabia has introduced a series of new laws which define atheists as terrorists, according to a report from Human Rights Watch. In a string of royal decrees and an overarching new piece of legislation to deal with terrorism generally, the Saudi King Abdullah has clamped down on all forms of political dissent and protests that could "harm public order". The new laws have largely been brought in to combat the growing number of Saudis travelling to take part in the civil war in Syria, who have previously returned with newfound training and ideas about overthrowing the monarchy. To that end, King Abdullah issued Royal Decree 44, which criminalises "participating in hostilities outside the kingdom" with prison sentences of between three and 20 years, Human Rights Watch said. Yet last month further regulations were issued by the Saudi interior ministry, identifying a broad list of groups which the government considers to be terrorist organisations - including the Muslim Brotherhood.

Atheism explodes in Saudi Arabia, despite state-enforced ban. JEDDAH, Saudi Arabia — In this country known as the cradle of Islam, where religion gives legitimacy to the government and state-appointed clerics set rules for social behavior, a growing number of Saudis are privately declaring themselves atheists. The evidence is anecdotal, but persistent. “I know at least six atheists who confirmed that to me,” said Fahad AlFahad, 31, a marketing consultant and human rights activist. “Six or seven years ago, I wouldn’t even have heard one person say that.

Belief vs. National Wealth. The Atheist That Never Really Was. You can't delve too deeply into modern Christian apologetics without coming across the name C.S. Lewis. A few years ago, an evangelical Christian friend presented me with one of Lewis's books, remarking in his inscription that Lewis was "himself once an atheist.

" Tales of atheists who suffer religious conversions are a staple of true believers. AAH Examiner Articles. Interview: Why Evolution is True with Jerry Coyne. Why the Peaceful Majority is Irrelevant - Op-Eds. 1. Genealogy of Religion. BBC Religion & Ethics - Scottish couples say 'I do' to Humanist weddings. 3 May 2013Last updated at 09:23 By Karen Millington BBC Reporter Humanist weddings have become increasingly popular in Scotland, and they may outnumber Church of Scotland weddings if current trends continue, says the Humanist Society Scotland. Born Again Pagan - An Atheist Smorgasbord: Movies, Comics, Photos, Stories and Much More!

Let Atheists (or Jews or Muslims) Care For Your Pets After the Rapture. Unnatural Acts that can improve your thinking. Are You A Simulation? : The Reality of Reality May Not Be Reality. Going Godless: Does Secularism Make People More Ethical? Interview with Scientist Richard Dawkins: 'Religion? Reality Has a Grander Magic of its Own' Are you smarter than an atheist? A religious quiz - Results. Atheist 'church' does not make atheism religious.

Alec's Evolution Pages with scientific evidence for evolution and refutations of creationist arguments. Mitochondrial Eve. Misconceptions Around Mitochondrial Eve. Do hurricanes make America more religious? - Mail Online - Michael Hanlon's Science blog: From The Cutting Edge. If Barack Obama triumphs tonight will it be the storm wot won it? Much is being made of the effects on voters of Hurricane Sandy, the extraordinary tropical ‘Frankenstorm’ that battered the north eastern seaboard of the United States and Canada over Halloween. With much of the New Jersey coastline either under water or swept away, large chunks of New York City without power for days, petrol stations running dry and so forth, here was an opportunity for the incumbent to look, well, presidential. Different Takes: Should we abandon idea of hell? Editor’s note: The new documentary "Hellbound? " explores Americans' ideas about hell.

We asked two prominent Christians who featured in the film to give us their very different takes on hell. 'I'm spiritual but not religious' is a cop-out. A few questions.... American Atheists: 1 in 20 Americans say they are atheists. INFORM: atheist, feminist, liberalist, vegetarian, progressive ... LOL Theists. Lessons from Unexpected Sources. Spiritual Quotes. Effects of Religious Teachings. Why you don't NEED religion to be good. Atheism, Freethought, Anti-Theist.

Spiritual people are more likely to be mentally ill (but at least they think life has more meaning) Researchers at University College London say spiritual believers are more likely to suffer problems such as eating conditions or an anxiety disorder By Steve Robson Published: 01:55 GMT, 2 January 2013 | Updated: 01:55 GMT, 2 January 2013 Researchers found those with a spiritual understanding of life were more likely to suffer from mental illness Being spiritual may give life deeper meaning, but it can also make you more susceptible to mental illness, new research suggests. A study found that people professing to be spiritual, but not conventionally religious, were more likely to suffer from a host of mental challenges. They suffered problems including abnormal eating conditions, drug abuse, anxiety disorder, phobias and neurosis. They were also more likely than others to be taking medication for mental health problems.

The study was based on a survey of 7,403 randomly selected men and women in England who were questioned about their spiritual and religious beliefs, and mental state. Famous Atheists and Freethinkers. A holiday message from Ricky Gervais: 'Why I'm a good Christian'