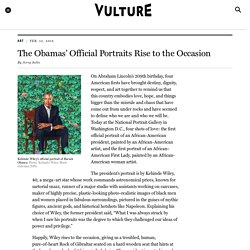 Photo: Kehinde Wiley/Mark Gulezian/NPG On Abraham Lincoln’s 209th birthday, four American firsts have brought destiny, dignity, respect, and art together to remind us that this country embodies love, hope, and things bigger than the misrule and chaos that have come out from under rocks and have seemed to define who we are and who we will be. 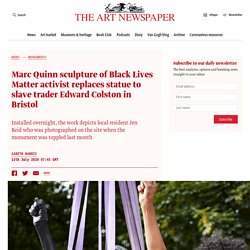 Quinn’s work, entitled A Surge of Power (Jen Reid), 2020, depicts local resident Jen Reid who was photographed standing on the site with her fist raised after the statue of Colston was toppled last month. The work, cast in black resin, was installed without council permission. “No formal consent has been sought for the installation,” a press statement says, adding that the piece is a “new temporary, public installation”. The mayor of Bristol, Marvin Rees, says: “The sculpture that has been installed today was the work and decision of London based artist. He adds: “We have set out a process to manage our journey. Marc Quinn, A Surge of Power (Jen Reid), 2020 © Marc Quinn studio. Donald Trump and Boris Johnson pucker up in street art. A 15-foot mural featuring the two politicians has appeared on a derelict building in the southwest city of Bristol. 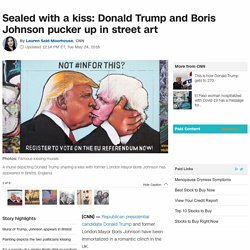 Bristol has a rich street art history and is reputed to be the home of elusive graffiti artist Banksy. The text below the painting reads: "Not #InForThis? Register to vote on the EU Referendum now. " Johnson is a figurehead for the UK campaign to leave the European Union. Trump has said he doesn't see why Britain would need the EU. The presumptive Republican nominee recently weighed in on the debate in an interview with Piers Morgan, where he diverged from President Obama's stance. "I have no preference. The Bristol street art is a parody of the famous 1990 Berlin Wall mural by artist Dmitri Vrubel which depicts Soviet leader Leonid Brezhnev and East German leader Erich Honecker sharing a kiss. This isn't the first time Trump has been captured in a "love scene. " Rule Britannia, Britannia rule the waves. Best of British History, Royal Family,Travel and Culture.

Guarded by lions and towering above Trafalgar Square, this lofty monument is one of London’s most iconic On 12 November 1918, London saw wild celebrations as an armistice declared the end of the First World War. 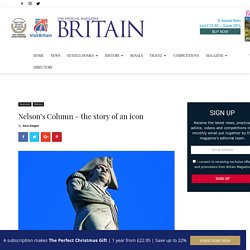 Nowhere was the occasion more rumbustiously marked than Trafalgar Square, memorial to another British victory. As night fell, euphoric crowds lit a bon fire around the square’s centrepiece, Nelson’s Column, using army recruitment posters, wooden paving blocks, and even a night-watchman’s hut for fuel. A fire engine arrived; it was commandeered and the firemen themselves doused. One hundred years on, the resulting cracks to the Devon granite pillar are long since repaired but deep scars in the stone base remain, telling their tale of public outburst in the very hour of peace. The Battle of Trafalgar claimed the life of Admiral Lord Nelson in 1805, even as Britain gained one of its most famous victories. It seemed the one place that hadn’t honoured the admiral was England’s capital.