The Skew Programming Language. Matz/streem. GitHub - chameco/Solid: A minimalist interpreted language, with a clean object model and a tiny VM. Stata Programming Essentials. Ever needed to do the same thing to ten different variables and wished that you didn't have to write it out ten times? 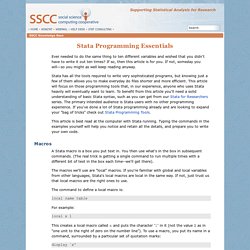 If so, then this article is for you. If not, someday you will—so you might as well keep reading anyway. Stata has all the tools required to write very sophisticated programs, but knowing just a few of them allows you to make everyday do files shorter and more efficient. This article will focus on those programming tools that, in our experience, anyone who uses Stata heavily will eventually want to learn. To benefit from this article you'll need a solid understanding of basic Stata syntax, such as you can get from our Stata for Researchers series.

This article is best read at the computer with Stata running. IBM Knowledge Center - SPADE programming language and compiler. L.B.Stanza. About SPARK 2014. GitHub - LADSoft/Simple-MSIL-Compiler: Experimental MSIL Version of the Orange C compiler. Snap! (Build Your Own Blocks) 4.0. Simit - A language for computing on sparse systems. StreamIt. StreamIt is a programming language and a compilation infrastructure, specifically engineered for modern streaming systems. 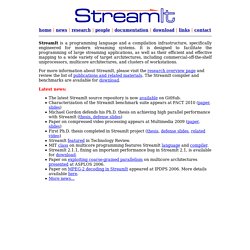 It is designed to facilitate the programming of large streaming applications, as well as their efficient and effective mapping to a wide variety of target architectures, including commercial-off-the-shelf uniprocessors, multicore architectures, and clusters of workstations. For more information about StreamIt, please visit the research overview page and review the list of publications and related materials.

Standard ML of New Jersey. Swift. Swift is a new, principled approach to building web applications that are secure by construction. 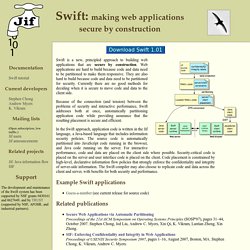 Amdahl’s Law Illustrates Why This is So Critical Parallelizing half of a software application seems like a great accomplishment. 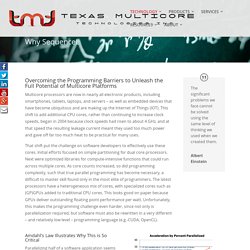 Yet as the chart shows, even parallelizing 50% of your application means it will never run more than twice as fast, no matter how many cores you add! Squl – the declarative programming language. Category:Sidef. Sidef This programming language may be used to instruct a computer to perform a task. 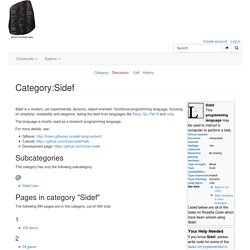 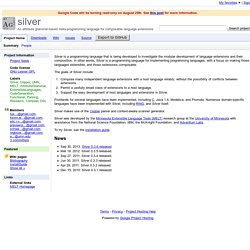 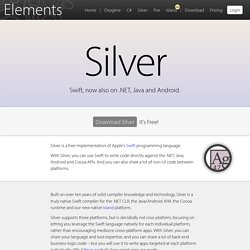 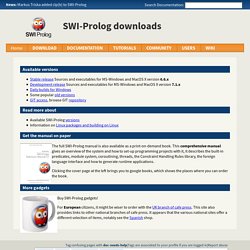 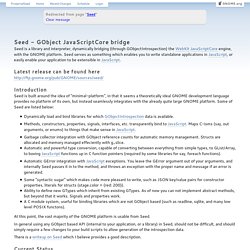 Seed serves as something which enables you to write standalone applications in JavaScript, or easily enable your application to be extensible in JavaScript. Latest release can be found here Introduction Seed is built around the idea of "minimal-platform", in that it seems a theoretically ideal GNOME development language provides no platform of its own, but instead seamlessly integrates with the already quite large GNOME platform.

Some of Seed are listed below: At this point, the vast majority of the GNOME platform is usable from Seed. In general using any GObject based API (internal to your application, or a library) in Seed, should not be difficult, and should simply require a few changes to your build scripts to allow generation of the introspection data. H2CO3/Sparkling. The SubC Compiler - T3X.ORG. SubC is a fast and simple public domain compiler for a clean subset of the C programming language. 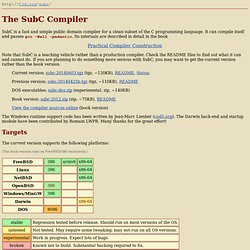 It can compile itself and passes gcc -Wall -pedantic. Its internals are described in detail in the book Practical Compiler Construction Note that SubC is a teaching vehicle rather than a production compiler. Check the README files to find out what it can and cannot do. Current version: subc-20140603.tgz (tgz, ~120KB), README, Status. Home — Shen. Scratch - Imagine, Program, Share. Squeak Smalltalk. SNAP! (Build Your Own Blocks) Stagecast - Make Your Own Interactive Games, Simulations, and Stories. Kids Develop Thinking Skills while Learning Programming Concepts. Stencyl: Make iPhone, iPad, Android & Flash Games without code.

The Computer Programming Language For Kids! Trizen/sidef. H2CO3/Sparkling. Sysel – HelenOS. An effort to design a high-level programming language suitable for writing HelenOS severs and applications. Note: Although the wiki is hosted here at helenos.org, Sysel is an independent and purely experimental project developed by Jiří Svoboda. While code from Sysel project runs on HelenOS, the HelenOS project made, as of the time of writing, no decision or commitment to using Sysel for any particular purpose. Szl - Szl - A Compiler and Runtime for the Sawzall Language. What is it? Szl is a compiler and runtime for the Sawzall language. It includes support for statistical aggregation of values read or computed from the input.

Google uses Sawzall to process log data generated by Google's servers. Since a Sawzall program processes one record of input at a time and does not preserve any state (values of variables) between records, it is well suited for execution as the map phase of a map-reduce. The library also includes support for the statistical aggregation that would be done in the reduce phase of a map-reduce. Welcome. Scratch - Imagine, Program, Share. The Swift Parallel Scripting Language. Welcome. Home · trizen/sidef Wiki. H2CO3's Sparkling. ./ in 239dec0b46172cc845e62c5d6acbebd167b831d2. Software / setlX. Computers make very fast, very accurate mistakes. In General setlX is an interpreter for the high level programming-language SetlX (set language extended). The most distinguishing feature of this language is the support it offers for sets and lists. This feature permits convenient implementations of mathematical algorithms:As set theory is the language of mathematics, many mathematical algorithms that are formulated in terms of set theory have very straightforward implementations in SetlX.

It allows you to remove incidental complexity when using the base class libraries makes best practices, such as test driven development, easy practices. Spring.NET is created, supported and sustained by SpringSource. The design of Spring.NET is based on the Java version of the Spring Framework, which has shown real-world benefits and is used in thousands of enterprise applications world wide.

Sljit - stack-less jit compiler. Script Cards: A Visual Programming Language for Games Authoring by Young People. Sequoia++ Programming Language. What is Sfx? Sfx is an compiler and integrated development system used to generate digital audio effects and synthesizer instruments. The computer language used to build these instruments and effects is the Sfx language, a superset of the MPEG-4 standard SAOL audio compiler language.

The Sfx compiler is a C++ front-end compiler. That means that SAOL or SFX code is converted to C++, and then compiled into executable orchestras that can then be used to generate real-time audio. As a result, the current release of Sfx requires that Microsoft Visual C++ 6.0 be installed on the system on which Sfx is running. MyJIT. Spec# - Home.