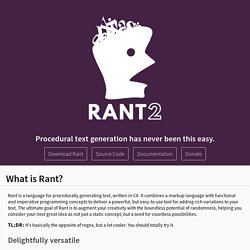 It combines a markup language with functional and imperative programming concepts to deliver a powerful, but easy-to-use tool for adding rich variations to your text. The ultimate goal of Rant is to augment your creativity with the boundless potential of randomness, helping you consider your next great idea as not just a static concept, but a seed for countless possibilities. TL;DR: It's basically the opposite of regex, but a lot cooler. You should totally try it. Delightfully versatile Create character names and randomized dialogue for your games, generate the world's strangest novel, randomize your website's CSS, or simply roll some virtual dice. Friendly API Rant's API is so easy to use that it will bring tears of pure joy to your eyes. Branching Add branching choices with optional weighting. {Sunday|Monday|Tuesday|Wednesday|Thursday|Friday|Saturday} Tuesday Dictionary queries Automatic formatting. 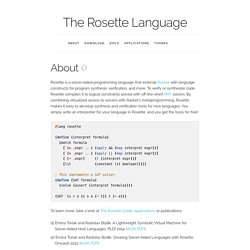 To verify or synthesize code, Rosette compiles it to logical constraints solved with off-the-shelf SMT solvers. By combining virtualized access to solvers with Racket’s metaprogramming, Rosette makes it easy to develop synthesis and verification tools for new languages. You simply write an interpreter for your language in Rosette, and you get the tools for free! #lang rosette (define (interpret formula) (match formula [`(∧ ,expr ...) (apply && (map interpret expr))] [`(∨ ,expr ...) To learn more, take a look at The Rosette Guide, applications, or publications: [1] Emina Torlak and Rastislav Bodik. Ring-lang. Rascal MPL - Untitled. The Official RPerl Website. The reFLect Programming Language. ReFLect is a functional programming language designed and implemented by a team at Intel Corporation's Strategic CAD Labs under the direction of Jim Grundy. 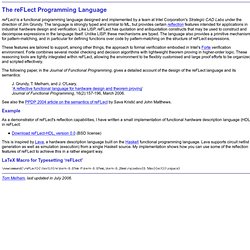 The language is strongly typed and similar to ML, but provides certain reflection features intended for applications in industrial hardware design and verification. Like LISP, reFLect has quotation and antiquotation constructs that may be used to construct and decompose expressions in the language itself. Unlike LISP, these mechanisms are typed. The language also provides a primitive mechanism for pattern-matching, and in particular for defining functions over code by pattern-matching on the structure of reFLect expressions. These features are tailored to support, among other things, the approach to formal verificiation embodied in Intel's Forte verification environment. The following paper, in the Journal of Functional Programming, gives a detailed account of the design of the reFLect language and its semantics: J.

Sep:software:ratfor90 [Stanford Exploration Project] You can download ratfor90 from here. 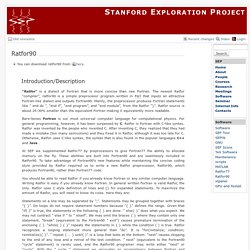 Introduction/Description “Ratfor” is a dialect of Fortran that is more concise than raw Fortran. The newest Ratfor “compiler”, ratfor90 is a simple preprocesor program written in Perl that inputs an attractive Fortran-like dialect and outputs Fortran90. Mainly, the preprocessor produces Fortran statements like ” end do ”, “end if”, “end program”, and “end module”, from the Ratfor ”}”. Rerap - ReRap: A Rapira Interpreter. Welcome to RoboMind.net, the new way to learn programming. Red Programming Language. Roy. REBOL Language. The Racket Language. The Rust Programming Language.

Rizzly. If you're in a hurry, try the wild overview of Rizzly . 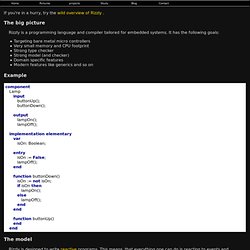 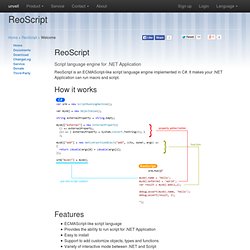 It makes your .NET Application can run macro and script. How it works Features ECMAScript-like script language Provides the ability to run script for .NET Application Easy to install Support to add customize objects, types and functions Variety of interactive mode between .NET and Script. Red Programming Language: Taking the Red/System pill. Here we go, this is the first release of Red/System dialect. 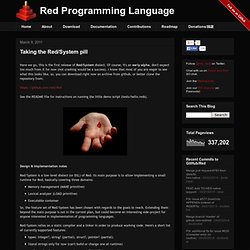 Of course, it's an early alpha, don't expect too much from it for now (not crashing would be a success). I know that most of you are eager to see what this looks like, so, you can download right now an archive from github, or better clone the repository from: See the README file for instructions on running the little demo script (tests/hello.reds). Design & Implementation notes. Documentation for the rex Language and Interpreter. Main Page - Rosetta. Rip Programming Language. Radian Programming Language. Rabbitlang - The Rabbit programming language. Nddrylliog/rock. Introduction - rathaxes - project description. - Rathaxes, a DSL for driver developement. A driver is a software which allows communication between hardware and operating system. 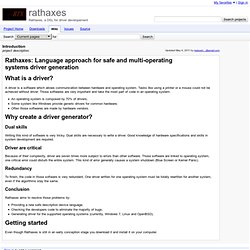 Tasks like using a printer or a mouse could not be achieved without driver. Those softwares are very important and take the most part of code in an operating system: An operating system is composed by 70% of drivers; Some system like Windows provide generic drivers for common hardware; Often those softwares are made by hardware vendors. Dual skills Writing this kind of software is very tricky. Driver are critical Because of their complexity, driver are seven times more subject to errors than other software.

Redundancy To finish, the code in those software is very redundant. Retro. Retro is a concatenative, stack based language with roots in Forth. 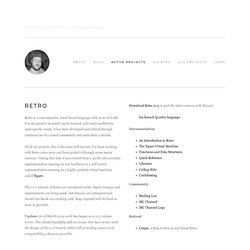 It is designed to be small, easily learned, and easily modified to meet specific needs, it has been developed and refined through continual use by a small community over more than a decade. Of all my projects, this is the most well known. I've been working with Retro since 2001 and have guided it through seven major versions. Revelation Software: Home. Railo Server - Fast and Free Open Source Web Development with CFML: The evolution of Railo. The R Project for Statistical Computing. RBASIC™ Integrated Rapid Application Development Environment for Computer-to-Radio Interfacing. Rascal - WebHome. Catseye / Robin. Robin is a programming language which draws from Scheme (via Pixley), PicoLisp, and Erlang. 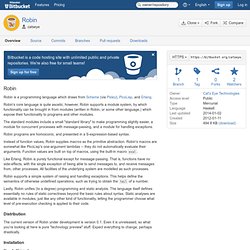 Robin's core language is quite ascetic; however, Robin supports a module system, by which functionality can be brought in from modules (written in Robin, or some other language,) which expose their functionality to programs and other modules. The standard modules include a small "standard library" to make programming slightly easier, a module for concurrent processes with message-passing, and a module for handling exceptions. Robin programs are homoiconic, and presented in a S-expression-based syntax. Instead of function values, Robin supplies macros as the primitive abstraction. Robin's macros are somewhat like PicoLisp's one-argument lambdas -- they do not automatically evaluate their arguments. Like Erlang, Robin is purely functional except for message-passing.

Ragel targets C, C++, Obj-C, C#, D, Java, Go and Ruby. Ragel state machines can not only recognize byte sequences as regular expression machines do, but can also execute code at arbitrary points in the recognition of a regular language. Code embedding is done using inline operators that do not disrupt the regular language syntax. The core language consists of standard regular expression operators (such as union, concatenation and Kleene star) and action embedding operators.

The user’s regular expressions are compiled to a deterministic state machine and the embedded actions are associated with the transitions of the machine. Ragel also provides operators that let you control any non-determinism that you create, construct scanners, and build state machines using a statechart model. Reda4 - programming language derived from colorforth. Rosetta-lang - Rosetta, a Programming Language for Generative Design. Rerap - ReRap: A Rapira Interpreter. RunAWK. Ruby Programming Language. Red Programming Language. RPL/2 ® - Home. The Racket Language. Reflective# R.NET. Language RIGAL home page. Home - Reef Angel Controller. Raven. I did not set out to create yet another programming language, nor did I have any specific aims going into this project. Instead a collection of separate scripting tools, hacked up for one task or another, grew slowly together into a whole during several years use on Linux boxes.

After the third rewrite of the core, the result is a scripting language I've called Raven. Oh, and no special reason for the name. I like birds. It has absolutely nothing to do with picking the best features from the corpses of previous languages in a nefarious fashion. So I'll describe my ideal everyday langauge, in terms of what I've ripped off from existing languages. What I ripped from Python Whitespace indentation to define code blocks.Some common function names. What I ripped from Forth Postfix Notation and the Data Stack.Dictionary of short atomic functions. What I ripped from Perl Lists and Hash tables.Regular Expressions. What else it needed to do. Examples Local Snippets. Rust. Rhope.