A la carte journalism: can CrowdNe.ws be the iTunes of articles? 24h dans une rédaction. Tutorials. What journalists need to know about interviewing for video. Interviews are a cornerstone of video storytelling because they provide emotion, content and structure, especially in documentary-style stories with little or no narration. 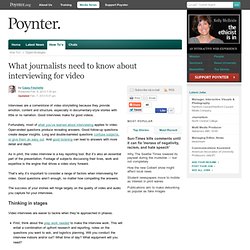 Masterfile (Research Database) The ‘Masterfile’ is a simple, yet effective database for researchers. 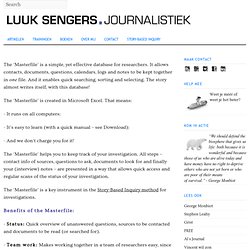 It allows contacts, documents, questions, calendars, logs and notes to be kept together in one file. And it enables quick searching, sorting and selecting. The story almost writes itself, with this database! The ‘Masterfile’ is created in Microsoft Excel. [Expert] Le "journalisme long" se perd ? Tant mieux ! par Cyrille Frank. 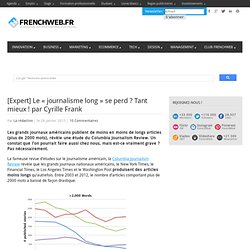 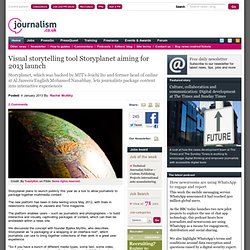 The new platform has been in beta testing since May 2012, with trials in newsrooms including Al Jazeera and Time magazine. The platform enables users – such as journalists and photographers – to build interactive and visually captivating packages of content, which can then be embedded within a news site. We discussed the concept with founder Bjarke Myrthu, who describes Storyplanet as "a packaging or a wrapping or an interface tool", which journalists can use to bring together collections of their work in a great user experience. "So if you have a bunch of different media types, some text, some video, some photos, you can create a really nice package out of it that people can navigate in different ways," Myrthu added. 10 ways young journalists can make themselves more marketable. While many recent changes in journalism have led to budget cuts and layoffs, others have created new opportunities — to tell stories in nontraditional ways, develop different skills, and guide the industry in promising directions. 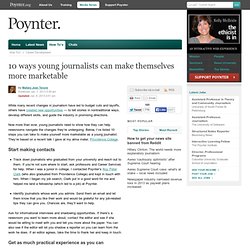 Now more than ever, young journalists need to show how they can help newsrooms navigate the changes they’re undergoing. Below, I’ve listed 10 steps you can take to make yourself more marketable as a young journalist. 3 Tech Trends That Show Journalism of the Future - 10,000 Words — www.mediabistro. CES is the ultimate in tech tools for all kinds of people, and with the level of hardware that the 2013 installment has already showcased in just its first day, there’s plenty to drool over. 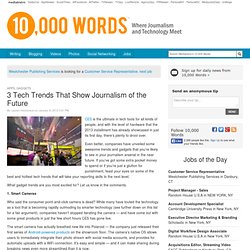 Even better, companies have unveiled some awesome trends and gadgets that you’re likely to see in your journalism arsenal in the near future. If you’ve got some extra pocket money to spend or if you’re just a glutton for punishment, feast your eyes on some of the best and hottest tech trends that will take your reporting skills to the next level. What gadget trends are you most excited for? Let us know in the comments. 1. Relater les épisodes judiciaires d’une élue de premier plan « webjournaliste en presse régionale et locale. Press Pass – a live directory of journalists organized by beat, outlet, & region. Outils de qualité et bonnes pratiques.

15 Must-Have Collaboration Tools for Journalists. While collaboration can’t run on technology alone (our roundup of collaboration best practices makes the need for human planning and participation clear), tech tools definitely make working together easier today than it’s ever been before. 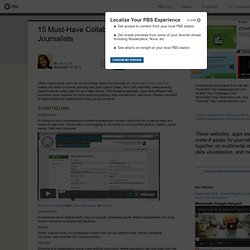 Forget That Survey. Here's Why Journalism Is The Best Job Ever. 15 Newsroom Tools From CIR’s TechRaking Conference. The Googleplex where TechRaking was held. 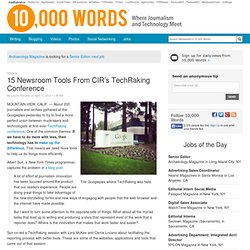 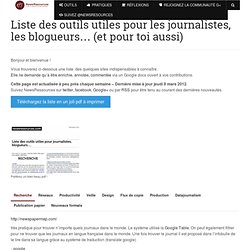 Suivez NewsRessources sur twitter, facebook, Google+ ou par RSS pour être tenu au courant des dernières nouveautés. Www.reseau-oudinot.com/wp-content/uploads/2012/03/Journaliste-chronique-d-une-mort-annoncée.pdf. All the News That's Fit to Click: Analyzing New York Times Design. Overview | How is The New York Times designed, and how does its look and feel, both in print and online, contribute to the reader’s experience of the content? 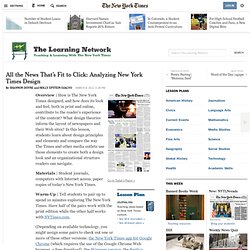 What design theories inform the layout of newspapers and their Web sites? In this lesson, students learn about design principles and elements and compare the way The Times and other media outlets use those elements to create both a design look and an organizational structure readers can navigate. Materials | Student journals, computers with Internet access, paper copies of today’s New York Times. Warm-Up | Tell students to pair up to spend 10 minutes exploring The New York Times. Have half of the pairs work with the print edition while the other half works with NYTimes.com. Tell the pairs to take on the roles of reader and monitor. Avenir du journalisme. How Journalists Can Use LinkedIn. Many people think the main task of a journalist is to write. That’s part of the job, of course, but sourcing and checking stories is probably as important.

It has always been the case, but luckily, new tools have made our lives much easier. No need to make ten phone calls to locate the right person to interview, as social networks have become an important tool for newsrooms. Why it’s time for journalists to pay attention to Pinterest & what you can do there. The Internet is buzzing about Pinterest, a newly hot social network that sits somewhere between Tumblr and Delicious. But does Pinterest deserve a spot on the list of essential services for the socially savvy journalist? Visits to Pinterest took off in the last half of 2011, according to this chart from Experian Hitwise. These digital, visual pinboards had almost 32 million visits in November, and traffic is about 40 times higher than six months ago, according to Experian Hitwise. Pinterest is now the No. 7 social networking site by visits, ahead of MySpace and Google+. Rapid overall growth, check.

Ten LinkedIn tips for journalists. A handful of treats on how to use LinkedIn as a journalist Credit: Image by Nan Palmero on Flickr. Some rights reserved. It is 10 years this year since LinkedIn was started in the living room of Reid Hoffman before being launched in May 2003. This guide looks at how journalists can use the social network to search for stories, make contacts and manage communities of readers. 1.

For example, if Journalism.co.uk wants to find a former News of the World journalist, I could add the keyword "journalist" and type "News of the World" into the "current or past" company field. The Next Great Media Form - Summify. Many have written about the changing news business, how the economics of inefficiency that characterized newspapers ad sales, which still are the lion's share of revenues, don't apply in a world of plenty; how anyone with a smartphone and camera can act as a reporter and draw eyeballs away from so-called mainstream sites; how publishers are hoping the iPad and the teeming apps ecosystem will somehow toss them a lifeline.

Fewer, however, have addressed how the actual content is changing. But we are in the midst of a transformative shift in the craft of journalism. The Art Of The Live Blog. Earlier this year Anthony DeRosa was working on the agency side of Reuters, managing its API, when editors on the news side heard of his side project, a news blog on Tumblr called Soup that had cracked the top 25 of all tumblogs tracked by Compete--more than 2.3 million of them. In addition to his popularity on Tumblr--Mashable anointed his blog one of top tumblers of 2008--DeRosa was also a respected member of the Twitterati, with NBC New York naming him one of the "20 individuals who shape the local conversation.

" In July Reuters named him social media editor with the edict to extend Reuter's brand, attract more people to its news, and assist its reporters and editors in using social media. Recently, I caught up with DeRosa at Thomson Reuters headquarters in Times Square, New York. New Twitter formalizes news wire service function. What started as a simple, chronological Twitter timeline of your friends’ short messages is now actively curating the news and information that flows through the social network. Tips for writing radio news scripts. How To Take iPhone Photos. 10 tips for recording a better interview.

A tool to work out when to tweet. Journalists: 5 real-world tips for jumping into PR. Spéciale dernière : La presse n’est plus à vendre - Web 1,2,3ElectronLibre. Tous scotchés au live. “We Are Journalists” Tumblr Recalls The Romanticism of Reporting. Why does the future of news have to be us versus them? Is Google helping journalists, or co-opting them? Google will begin integrating journalists’ Google-ized identities into Google News. Three lessons news sites can take from the launch of The Verge. Don’t think of it as a newspaper — it’s a data platform. [tutoriels] Le kit (de survie) du journaliste multimédia. Life and Code: Life and Code’s Learn To Code Resources Page.

Etude Orange et Terra fémina: comment les réseaux sociaux bousculent l’info. The Guardian is opening up its newslists so you can help us make news. Le meilleur ami du reporter. Like them or not, the latest changes to Facebook offer big ideas for news orgs. L'utilisation des médias sociaux par les journalistes. What media companies should learn from Tumblr’s success. Jux Reinvents The Blog as a Full-Screen Experience.

Google Brings State-of-the-Art Dynamic Layouts to Blogger. If “he said, she said” journalism is irretrievably lame, what’s better? Tool of the Day: Meporter. Is Branded Journalism Still Journalism? 10 ways journalists can use Twitter before, during and after reporting a story. 10 Awesome Free Tools To Make Infographics. How do you ‘convert’ curmudgeon journalists to using Twitter? The Complete Guide To Facebook’s Subscribe Button. New Media Makers Toolkit. 5 things journalists need to know about new Facebook subscription feature.

Journalists Flock to LinkedIn. How Tumblr is Changing Journalism.