How to Be A Great Leader In A World Of Control Freaks - Lolly Daskal. Chances are, somewhere in your professional or personal life you’ve encountered an all-out control freak. 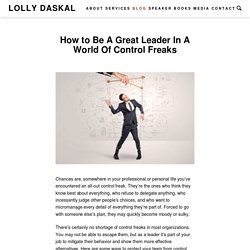 They’re the ones who think they know best about everything, who refuse to delegate anything, who incessantly judge other people’s choices, and who want to micromanage every detail of everything they’re part of. Forced to go with someone else’s plan, they may quickly become moody or sulky. There’s certainly no shortage of control freaks in most organizations. You may not be able to escape them, but as a leader it’s part of your job to mitigate their behavior and show them more effective alternatives. 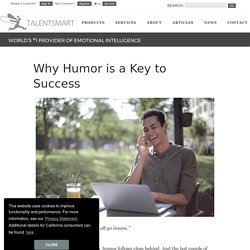 The greater the challenge, the more this glass-half-full wisdom can come across as Pollyannaish and unrealistic. It’s hard to find the motivation to focus on the positive when positivity seems like nothing more than wishful thinking, especially during unsettling times like right now. The real obstacle to positivity is that our brains are hard-wired to look for and focus on threats. This survival mechanism served humankind well back when we were hunters and gatherers, living each day with the very real threat of being killed by someone or something in our immediate surroundings. Prince Ea - Employee Teaches Boss a Lesson. 31 Team Leader Skills Every Manager Should Have - When I Work.

Leadership and management are more than a mere title. 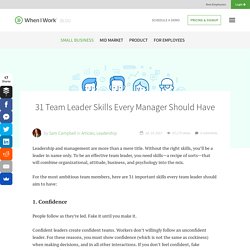 Without the right skills, you’ll be a leader in name only. To be an effective team leader, you need skills—a recipe of sorts—that will combine organizational, attitude, business, and psychology into the mix. For the most ambitious team members, here are 31 important skills every team leader should aim to have: 1. Leading from Within. (15) It's Nice To Be Important, But It's More Important To Be Nice! 7 Strategic Imperatives For Great Leadership. Leadership at all levels. 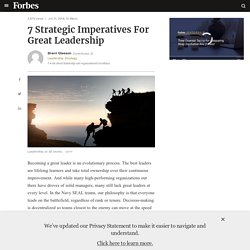 Getty Becoming a great leader is an evolutionary process. The best leaders are lifelong learners and take total ownership over their continuous improvement. And while many high-performing organizations out there have droves of solid managers, many still lack great leaders at every level. 10 Surprising Things Successful Leaders Do Differently. Over the last three years, I’ve interviewed over 200 highly successful CEO’s, military officers, entrepreneurs and leadership gurus including John C. 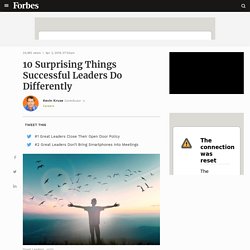 Maxwell, Ken Blanchard, Stephen M.R. Covey, Liz Wiseman, Kim Scott, Patty McCord and others. I always get them to reveal their number one secret to leadership; what advice would they give to a younger version of themselves? After analyzing their answers 10 themes emerged. #1 Great Leaders Close Their Open Door Policy. (1) It's Influence, NOT Authority that makes a Great Leader. CLS TI Leadership Development Research OTHERS 032016. 9 Bad Manager Mistakes That Make Good People Quit. It’s incredible how often you hear managers complaining about their best employees leaving, and they really do have something to complain about—few things are as costly and disruptive as good people walking out the door. 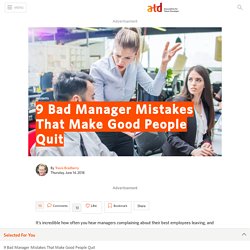 Managers tend to blame their turnover problems on everything under the sun, while ignoring the crux of the matter: people don’t leave jobs; they leave managers. The sad thing is that this can easily be avoided. 2013 nursing leadership management leadership styles. 7 Principles of Transformational Leadership. Leaders Be Aware: Your Humor Influences Employees - International Coach Federation. Www.forbes. Goalcast - "She didn't fall in love with you because you... When Every Leader Promises to Change the World, How Can We Tell Who Will Leave Us Better Off? Google's Detailed Management Study Reveals 8 Signs You're a Toxic Boss. The Manager’s Guide To (Appropriately) Advocating For Your Team. Dear Joseph, One of the most important roles I have as a manager is to be sure my people are properly recognized for their contributions. 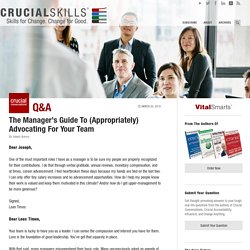 I do that through verbal gratitude, annual reviews, monetary compensation, and at times, career advancement. 7 Inspiring Traits of Compassionate Leadership. 3 Deadly Sins of Poor Leadership (Part 3) This is the last post in a series on the sins of poor leadership. 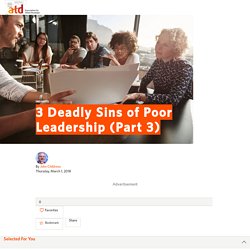 The first installment focused on not moving fast enough to replace poor performers, either for performance or behavioural reasons. The next post detailed the second sin—how the avoidance of face-to-face communications and regular one-on-ones leads to lack of respect for the CEO and poor commitment among the leadership team. The third deadly sin—not understanding the needs of your customer—is one that many CEOs and business leaders know is debilitating but keep repeating anyway.

Everyone in the corner office realizes how important it is to know and understand their customers, whether it is retail shoppers or B2B customers. Understanding the needs and wants of a customer gives an organization the opportunity to produce products, services, and an experience that directly fulfils the customer's needs. But many CEOs and business leaders somehow forget the importance of being close to the customer. 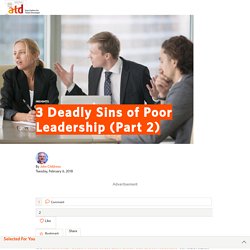 My initial article focused on how some leaders fail to move fast enough at replacing poor performers, either for performance or behavioural reasons. This is especially damaging to the CEO or team leader’s credibility, because everyone in the organization knows who is not performing. Keeping poor performing executives is also damaging to the overall culture, sowing the seeds of mistrust and lack of professionalism.

Now, let’s examine the second deadly sin: poor communication, which is both debilitating and insidious—not to mention, far too common. The way we communicate with others and with ourselves ultimately determines the quality of our lives, says life and business strategist Tony Robbins. Consider the example of a senior leader in manufacturing who constantly says, “I’m easy to talk with. Want to Be a Better Leader? Stop Giving Orders and Do This Instead. Lead with Authenticity. True Value - Purpose and Leadership - Scott Deming.

Servant Leadership: How To Put Your People Before Yourself. Leaders vs Managers: 17 Traits That Set Them Apart [Infographic] How to Survive Toxic Leadership. This blog post is the second in a three-part series on Toxic Leadership. 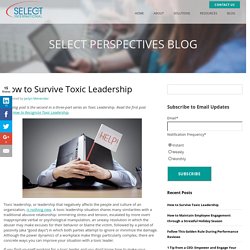 This Elon Musk Email to Tesla Employees Is a Powerful Lesson in Authentic, Heartfelt Leadership. The Most Powerful Leadership Tool You Have: Your Own Example. How Do Leaders Earn Trust? People don't trust their leaders. According to a recent Forbes article, in CEOs is at an all-time low after plunging by 12 points this year, and 63% of employees say that CEOs are not credible. When employees do not trust their leaders, instability typically follows: Lack of trust creates an environment where concerns quickly evolve into fears. And when fears collide with a belief that the system is failing, trouble results.

Also as distrust and fear increase, the negative impact on employee morale, engagement and performance accelerate. The Beryl Institute - Improving the Patient Experience. As the newest member of The Beryl Institute Team, I want to begin by stating how honored I feel to be brought in as the Vice President of Experience Innovation. I started my new role on October 1, 2017 and the timing could not have been better because my first day on the job meant a trip to Southlake, TX for a quarterly in-person staff meeting. Leadership - Engage your Team - Create a Culture of Engagement. The Most Successful Leaders Do 15 Things Automatically, Every Day. Top 10 Mistakes Management Makes Managing People. Many managers lack fundamental training in managing people.

But, even more importantly, managers lack the values, sensitivity, and awareness needed to interact effectively all day long with people. Skills and techniques are easier to teach, but values, beliefs, and attitudes are much harder to teach—and harder for managers to learn. Yet, these are the underlying issues that will most make managers successful—or not. 9 Things A Boss Should Never Say To An Employee. How to Deliver Bad News to Your Employees. Kenneth Andersson for HBR Delivering bad news is tough.

It’s even harder when you don’t agree with the message or decision you’re communicating. Maybe you have to tell your star performer that HR turned down her request for a raise or to inform your team that the company doesn’t want them working from home any longer. How to Lead Change You Don’t Agree With. 9 Tips for Communicating Decisions You Don't Agree With - Insperity. A change in business hours, layoffs, a reduction in benefits, a department reorganization, an elimination of bonuses, elimination of casual Fridays: Change in business is as relentless as it is inevitable. While the rationale for such changes may be for the good of the company, sometimes these decisions are unpopular with your employees.

And even if you disagree with the changes yourself, often, these decisions aren’t solely up to you. So, you’re left with a daunting task: Communicating a decision to your employees that you don’t personally agree with. How do you communicate a decision to your team when you disagree with it? The Five Messages Leaders Must Manage. Team Leadership: 9 ROLES of a TEAM LEADER - How To Become a Great Team Leader, Leading Team (tips by; Vadim Kotelnikov) The Challenges of Working for a People Pleasing Leader-Birkman Acceptance/Social Energy. Video-John Maxwell The 5 Levels of Leadership.