Should You Develop a Desktop or Web App? They said they’d be dead. 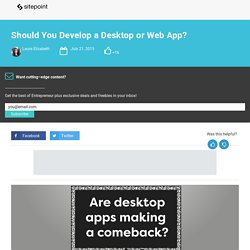 Gone from our docks and into our browsers. The demise of the desktop apps has long been predicted in favor of browser-based models. But with services such as Slack, Sunrise and Quip all going desktop, can we stop writing the eulogies for native apps after all? The demise of the native app You don’t see a downfall in good technology for a reason. And if you’re wondering why, it turns out they have some pretty solid reasons. 1.

It’s often far easier to convince people to use your app if they can get started right away. 2. Ok, since automatic updates were introduced this one isn’t the huge benefit it once was. 3. Downloadable apps are associated with one-off payments. Web apps seem to lend themselves better to the more profitable recurring payment structure. News Media Should Drop Native Apps. When it comes to the most basic form of news delivery, facts keep piling up in a way that makes native apps more and more questionable. 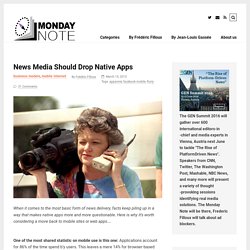 Here is why it’s worth considering a move back to mobile sites or web apps… One of the most shared statistic on mobile use is this one: Applications account for 86% of the time spend b’y users. This leaves a mere 14% for browser-based activities, i.e. sites designed for mobile, either especially coded for nomad consumption, built using responsive design techniques that adapt look and feel to screen size, or special WebApp designs such as FT.com.

This 86/14 split is completely misleading for two reasons: the weight of mobile gaming, and the importance of Facebook. Take a look at this chart form Flurry Analytics: If you combine gaming, Facebook and Social Messaging, roughly 60% of time spent on mobile is swallowed by this trio. By comparison, news-related applications do not requires a lot of phone resources. A new mobile ad report shows that while you probably start your day with social, news app users are loyal. When you wake up in the morning, what’s the first app you open? 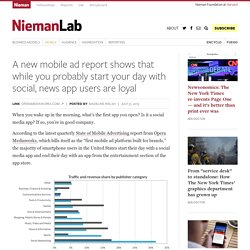 Is it a social media app? If so, you’re in good company. According to the latest quarterly State of Mobile Advertising report from Opera Mediaworks, which bills itself as the “first mobile ad platform built for brands,” the majority of smartphone users in the United States start their day with a social media app and end their day with an app from the entertainment section of the app store.

That’s according to data based on the Opera Mediaworks platform, which the company says reaches 800 million consumers. Its publishing customers include Wired, Vanity Fair, and CBS. While seeing this might make some editors want to tear out their hair, hold off because not all is lost for news producers. For app developers wondering how to find an audience, or where they would be able to best monetize their app, the results are split.

So Many Apps, So Much More Time for Entertainment. Over the span of just a few years, the concept of app usage has transformed from a novelty to an essential part of the mobile user experience. 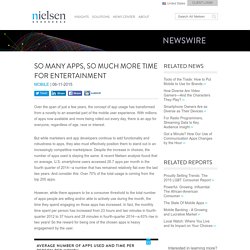 With millions of apps now available and more being rolled out every day, there is an app for everyone, regardless of age, race or interest. But while marketers and app developers continue to add functionality and robustness to apps, they also must effectively position them to stand out in an increasingly competitive marketplace. Despite the increase in choices, the number of apps used is staying the same. A recent Nielsen analysis found that on average, U.S. smartphone users accessed 26.7 apps per month in the fourth quarter of 2014—a number that has remained relatively flat over the last two years. Eugene Lang College. Students can study Journalism + Design as a major (BA, Journalism + Design), a minor (non-Liberal Arts majors), or a guided area of study (Liberal Arts majors). 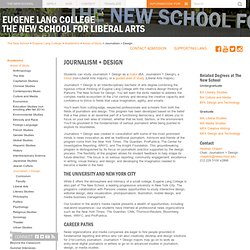 Journalism + Design is an interdisciplinary bachelor of arts degree combining the rigorous critical thinking of Eugene Lang College with the creative design thinking of Parsons The New School for Design. You will learn the skills needed to address the complex media ecosystem of the 21st century and develop the creative capacity and confidence to thrive in fields that value imagination, agility, and smarts.

You’ll learn from cutting-edge, respected professionals and scholars from both the fields of journalism and design. This program has been developed based on the belief that a free press is an essential part of a functioning democracy, and it allows you to focus on your own area of interest, whether that be food, fashion, or the environment. The University and New York City Career Paths. Journalism + Design. Andrew Meier Professor Andrew Meier is an assistant professor of journalism at Eugene Lang College, The New School for Liberal Arts. 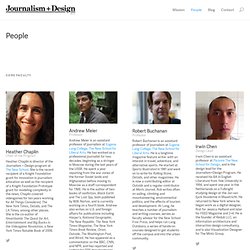 He has worked as a professional journalist for two decades, beginning as a stringer in Moscow during the last years of the USSR. He spent a year reporting from the war zones of the former Soviet lands and Afghanistan before moving to Moscow as a staff correspondent for TIME. The Times & Sunday Times Digital Development — Applications open for digital news work experience.