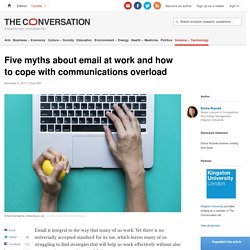 Yet there is no universally accepted standard for its use, which leaves many of us struggling to find strategies that will help us work effectively without also overstressing or causing email fatigue. There is no shortage of self-help books and time management gurus who argue that email zen is possible. But with so much research being conducted in different fields there is a risk that populist volumes and consultants simply cherry-pick the data and findings to fit their point of view – that is, if their recommendations are even evidence-based at all. We were commissioned by UK workplace experts ACAS to produce a systematic literature review across the fields of psychology, human-computer interaction and management of the strategies people use to try and deal with the torrent of work email. Managerial attitudes and perceived barriers regarding evidence-based practice: An international survey. Abstract Evidence-based practice (EBP) in management is still in its infancy. 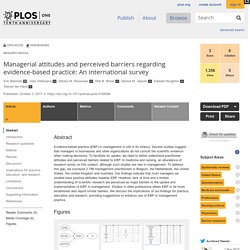 Several studies suggest that managers in businesses and other organizations do not consult the scientific evidence when making decisions. Research gives edge to fessing up. In a job interview or on a first date, everyone wants to make the best impression possible. 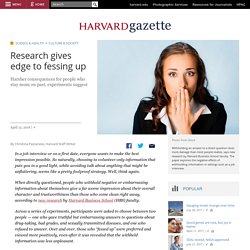 So naturally, choosing to volunteer only information that puts you in a good light, while avoiding talk about anything that might be unflattering, seems like a pretty foolproof strategy. Well, think again. When directly questioned, people who withhold negative or embarrassing information about themselves give a far worse impression about their overall character and trustworthiness than those who come clean right away, according to new research by Harvard Business School (HBS) faculty. Across a series of experiments, participants were asked to choose between two people — one who gave truthful but embarrassing answers to questions about drug-taking, bad grades, and sexually transmitted diseases, and one who refused to answer. Researchers Prove C-Suite Gender Gap—but Can’t Explain It - HBS Working Knowledge - Harvard Business School. Here’s some bad news and some worse news for women who aspire to the executive suite. 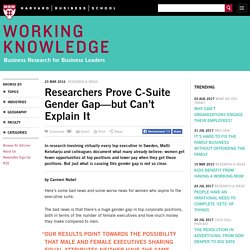 The bad news is that there’s a huge gender gap in top corporate positions, both in terms of the number of female executives and how much money they make compared to men. “Our results point towards the possibility that male and female executives sharing equal attributes neither have the same probability of reaching the top, nor are they paid equally” The worse news is there doesn’t seem to be much women can do to close that gap—no matter how talented, educated, skilled, lucky, ambitious, or genetically gifted they are—unless they can figure out a way to thwart discrimination.

The Psychological Cost of Boring Buildings. New Yorkers have long bemoaned their city being overrun by bland office towers and chain stores: Soon, it seems, every corner will either be a bank, a Walgreens, or a Starbucks. 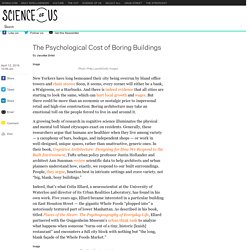 And there is indeed evidence that all cities are starting to look the same, which can hurt local growth and wages. What's a Boss Worth? - HBS Working Knowledge - Harvard Business School. We all have our boss horror stories. 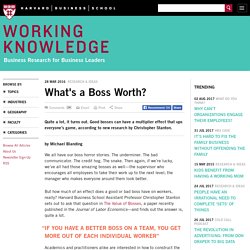 The underminer. The bad communicator. Recruiters think they can tell your personality from your resume. They can't. Recruiters are poor at inferring an applicant’s personality from their resume, but that doesn’t stop them from jumping to conclusions on the back of their flawed assumptions. 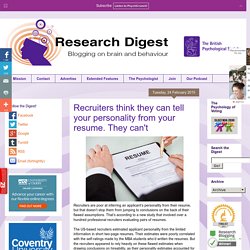 That’s according to a new study that involved over a hundred professional recruiters evaluating pairs of resumes. The US-based recruiters estimated applicant personality from the limited information in short two-page resumes. Their estimates were poorly correlated with the self-ratings made by the MBA students who’d written the resumes. There's a problem with assuming the most intelligent candidates make the best employees. Workplace research through the 20th Century suggested that selecting for intelligence is the best way to identify good performers. 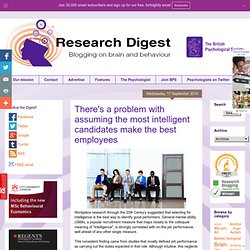 General mental ability (GMA), a popular recruitment measure that maps closely to the colloquial meaning of "intelligence", is strongly correlated with on-the job performance, well ahead of any other single measure. This consistent finding came from studies that mostly defined job performance as carrying out the duties expected in that role. BPS Research Digest: The supposed benefits of open-plan offices do not outweigh the costs. Questions raised over NHS pay-for-performance schemes. 19 August 2014 The effectiveness of the widespread use of pay-for-performance schemes in NHS hospitals has been thrown into doubt by new research revealing reductions in patient death rates are just a short-term effect. 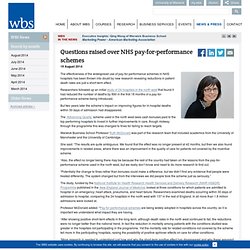 Researchers followed up an initial study of 24 hospitals in the north west that found it had reduced the number of deaths by 890 in the first 18 months of a pay-for-performance scheme being introduced. But two years later the scheme’s impact on improving figures for in-hospital deaths within 30 days of admission had disappeared. The ‘Advancing Quality’ scheme used in the north west sees cash bonuses paid to the top-performing hospitals to invest in further improvements in care, though midway through the programme this was changed to fines for failing to reach targets. Warwick Business School Professor Ruth McDonald was part of the research team that included academics from the University of Manchester and the University of Cambridge. The Manager in Red Sneakers.

Venture Investors Prefer Funding Handsome Men. If you're in search of startup funding, it pays to be a good-looking guy. 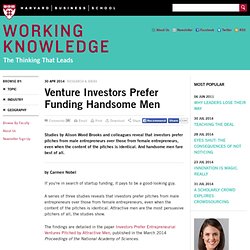 A series of three studies reveals that investors prefer pitches from male entrepreneurs over those from female entrepreneurs, even when the content of the pitches is identical. Attractive men are the most persuasive pitchers of all, the studies show. The findings are detailed in the paper Investors Prefer Entrepreneurial Ventures Pitched by Attractive Men, published in the March 2014 Proceedings of the National Academy of Sciences.

The most commonly used letter in the English dictionary. Simple, right? Now imagine it printed out millions of times on thousands of forms and documents. James Surowiecki: The Costs of Working Too Much. For decades, junior bankers and Wall Street firms had an unspoken pact: in exchange for reasonably high-paying jobs and a shot at obscene wealth, young analysts agreed to work fifteen hours a day, and forgo anything resembling a normal life. But things may be changing. Last October, Goldman Sachs told its junior investment-banking analysts not to work on Saturdays, and it has said that all analysts, on average, should be working no more than seventy to seventy-five hours a week.

A couple of weeks ago, Bank of America Merrill Lynch said that analysts are expected to have four weekend days off a month. And, last week, Credit Suisse told its analysts that they should not be in the office on Saturdays. When 3+1 is more than 4. In a famous scene from the film “Jerry Maguire,” NFL wide receiver Rod Tidwell repeatedly screams, “Show me the money!” Minds for Business. Psychological Science at Work The indispensable research blog on the science of the modern workplace, covering everything from leadership and management to the behavioral, social, and cognitive dynamics behind performance and achievement.

Creative Hobbies Linked With Job Performance. Who Goes to Work to Have Fun?