OMAM revision book 1.pdf. Of Mice and Men. A Teacher Writes.com: Curley's Wife Social and Historical Context of Women in Of Mice and Men GCSE and IGCSE. Curley’s wife is also treated unfairly, although many students find it more difficult to see this. 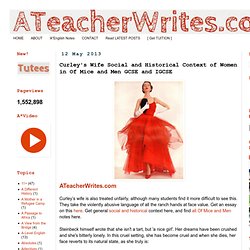 They take the violently abusive language of all the ranch hands at face value. Get an essay on this here. Get general social and historical context here, and find all Of Mice and Men notes here. Steinbeck himself wrote that she isn't a tart, but 'a nice girl'. Her dreams have been crushed and she's bitterly lonely. ‘the meanness and the plannings and the discontent and the ache for attention were all gone from her face’. Curley's wife is generally seen as a ‘tramp’ and a ‘tart’ because she takes an interest in the men on the ranch. 'I could get you strung up on a tree so easy it ain't even funny.' But she is also responding to the lack of respect she gets on the ranch, and asserting herself over the one person who is beneath her in the pecking order.

Curley’s wife has her own version of the American Dream. Hollywood Quotes: - Chapter Five Attitudes to Women in Of Mice and Men Ol’ Susy’s.

Websites. Plot Summary. Steinbecks' Message/ Judgements. The Title. The death of Candy's Dog. Essay Questions. Context AO4. Characters. Of Mice and Men" by John Steinbeck. John Steinbeck's Of Mice and Men CHAPTER 1 A FEW MILES south of Soledad, the Salinas River drops in close to the hillside bank and runs deep and green. 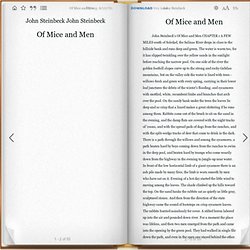 The water is warm too, for it has slipped twinkling over the yellow sands in the sunlight before reaching the narrow pool. On one side of the river the golden foothill slopes curve up to the strong and rocky Gabilan mountains, but on the valley side the water is lined with trees - willows fresh and green with every spring, carrying in their lower leaf junctures the debris of the winter's flooding; and sycamores with mottled, white, recumbent limbs and branches that arch over the pool. On the sandy bank under the trees the leaves lie deep and so crisp that a lizard makes a great skittering if he runs among them. 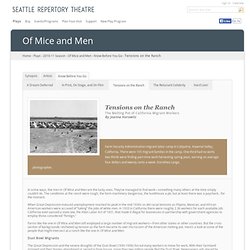 There were 155 migrant families in the camp. One third had no work; two-thirds were finding part-time work harvesting spring peas, earning on average four dollars and twenty cents a week. Dorothea Lange, photographer. In some ways, the men in Of Mice and Men are the lucky ones. When Great Depression-induced unemployment reached its peak in the mid 1930s so did racial tensions as Filipino, Mexican, and African American workers were accused of “taking” the jobs of white men.

Farms like the one in Of Mice and Men still employed a large number of migrant workers—from other states or other countries. Dust Bowl Migrants The Great Depression and the severe droughts of the Dust Bowl (1930-1936) forced many workers to move for work. The reality was a little different. Filipino Workers Mexican Workers.