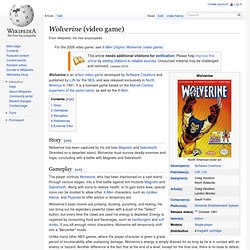 He can bring out his legendary powerful claws with a push of the "Select" button, but every time the claws are used his energy is depleted. Energy is regained by consuming food and beverages, such as hamburgers and soft drinks. If you kill enough minor characters, Wolverine will temporarily shift into a "Berzerker" mode. Unlike many other NES games, where the player character is given a grace period of invulnerability after sustaining damage, Wolverine's energy is simply drained for as long as he is in contact with an enemy or hazard.

Another difference is the fact that at the end of a level, except for the final one, there is no boss to defeat. In a retrospective of video games featuring Wolverine, IGN mocked the NES game for not being faithful to the comics as well as its high difficulty level.[1] Wolverine: Adamantium Rage. Story[edit] The SNES version follows Wolverine as he receives a mysterious transmission via computer; someone or something has information about his past and arranges for them to meet at an undisclosed location in Canada. 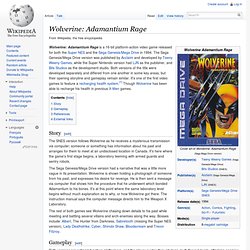 It's here where the game's first stage begins; a laboratory teeming with armed guards and sentry robots. The Sega Genesis/Mega Drive version had a narrative that was a little more vague in its presentation. Wolverine is shown holding a photograph of someone from his past, and expresses his desire for revenge. He is then sent a message via computer that shows him the procedure that he underwent which bonded Adamantium to his bones. X-Men: Wolverine's Rage. Gameplay[edit] Story[edit] Lady Deathstrike discovers schematics allowing her to build a weapon that will melt Wolverine's adamantium skeleton. 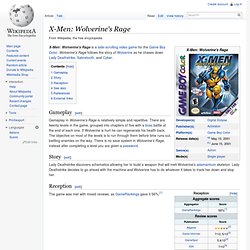 Lady Deathstrike decides to go ahead with the machine and Wolverine has to do whatever it takes to track her down and stop her. X2: Wolverine's Revenge. A significant feature has Mark Hamill providing the voice-over for Wolverine in game. 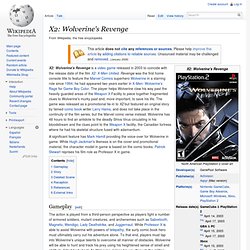 While Hugh Jackman's likeness is on the cover and promotional material, the character model in game is based on the comic books. Patrick Stewart reprises his film role as Professor X in game. Gameplay[edit] When engaged in combat, Wolverine can retract and release his adamantium claws at any time to perform slashing attacks, aerial combos, and a number of different throws. The strike moves used in battle are the Combat Strike Moves, which initiate a short cut-scene where Wolverine attacks the enemy. In addition to Combat Strikes, there are special Stealth Strikes, Situation-Specific Strikes and Boss-Specific Strikes which become available at certain points in the game. 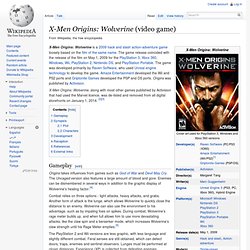 The game release coincided with the release of the film on May 1, 2009 for the PlayStation 3, Xbox 360, Windows, Wii, PlayStation 2, Nintendo DS, and PlayStation Portable. The game was developed primarily by Raven Software, who used Unreal engine technology to develop the game. Amaze Entertainment developed the Wii and PS2 ports and Griptonite Games developed the PSP and DS ports. Origins was published by Activision. X-Men: Destiny. Along with many other games published by Activision that had used a Marvel license, X-Men: Destiny was de-listed and subsequently removed from all digital storefronts on January 1, 2014.[4][5] The game and another game, Too Human, were recalled, and had their unsold copies destroyed due to legal issues between Silicon Knights and Epic Games over the games' use of Unreal Engine 3 code. 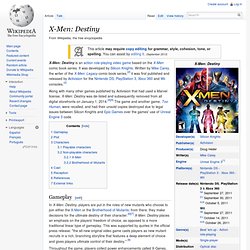 Gameplay[edit] In X-Men: Destiny, players are put in the roles of new mutants who choose to join either the X-Men or the Brotherhood of Mutants; from there, they make decisions for the ultimate destiny of their character.[6][7] X-Men: Destiny places an emphasis on the players' freedom of choice, as opposed to a more traditional linear type of gameplay.

This was supported by quotes in the official press release: "the all-new original video game casts players as new mutant recruits in a rich, branching storyline that features a deep element of choice and gives players ultimate control of their destiny. " [8] X-Men: The Official Game. X-Men: The Official Game uses several voice actors from the X-Men movie franchise. 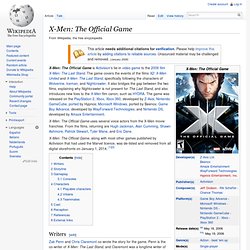 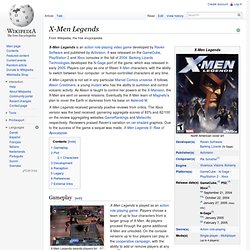 The Xbox version was the best received, garnering aggregate scores of 83% and 82/100 on the review aggregating websites GameRankings and Metacritic respectively. Reviewers praised Raven's variation on cel-shaded graphics. X-Men Legends II: Rise of Apocalypse. X-Men: Reign of Apocalypse. X-Men: Mutant Wars. Plot[edit] Gameplay[edit] Characters can be changed at any time during the game, which is important as their power level decreases through the game. 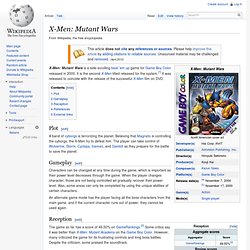 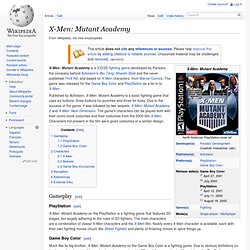 Due to obvious limitations on hardware, the stages in this version have been rendered in 2D, and the gameplay is different from the PlayStation version. In addition to Story Mode, where one player takes on all the others in consecutive fights, there is training mode, battle mode, survival mode, and a versus mode utilizing the Game Link cable. X-Men: Mutant Academy 2. Gameplay[edit] There are four modes to play: Characters[edit] Reception[edit] X-Men: Next Dimension. Next Dimension expands upon the concept of the first two games by adding several new characters, 3-D maps, and the option to play the story mode, which allows the player to fight a series of battles in between short movies that move the plot along.

This game is loosely based on the events of "Operation: Zero Tolerance". Plot[edit] When Bastion returns to the central room, he finds Phoenix, who challenges and finally defeats him. X-Men (Game Gear video game) X-Men: Gamesmaster's Legacy. X-Men: Mojo World. X-Men: Children of the Atom (video game) X-Men: Mutant Apocalypse. X-Men (1993 video game) Playable CharactersWolverine: Uses retractable claws which enhance the strength of his basic punches and allows him to execute special mid-air attacks. As in other X-Men games, he possesses a healing factor that enables the character to recover from injury (i.e. replenish the life bar). Gambit: Uses his trademark bo staff as a weapon. His charged cards track enemies. Cyclops: Uses rebounding optic blasts. Nightcrawler: Uses a teleportation ability which can skip many areas or transport a secondary character.

All of the music in the game was composed by Fletcher Beasley using the G.E.M.S. system (Genesis Emulation Music Software), which could communicate with the Yamaha 2612 FM synthesizer chip on the Sega Genesis and could be used to directly play back the sounds through the Genesis. In Fletcher's own words, "My inspiration was to create some hard edged rock/electronica tracks that would work well in the game. X-Men 2: Clone Wars. X-Men (1992 video game) X-Men: Madness in Murderworld. X-Men II: The Fall of the Mutants. The Uncanny X-Men (video game) The Uncanny X-Men is one of the handful of titles by LJN that was developed by an undisclosed external developer. Fighting against robots in the Future City Street Fight level A sixth mission where the player battles Magneto can be accessed after the first five levels have been completed; to access the level the player must press Select, B, up on the control pad, and Start simultaneously on the game's level selection screen.

A label is printed on the back of the cartridge telling players how to access this final level, but the label does not display the full combination of button presses needed.