The Dandelion – more herb than nuisance (includes video to make dandelion coffee) – The Ozarks Sentinel. Every single spring, great swaths of the landscape are dotted with the familiar and cheerful face of the dandelion. 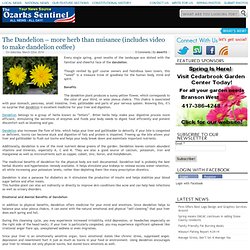 Though reviled by golf course owners and fastidious lawn lovers, this “weed” is a treasure trove of goodness for the human body, mind and spirit. Benefits The dandelion plant produces a sunny yellow flower, which corresponds to the color of your third, or solar plexus chakra. This chakra is associated with your stomach, pancreas, small intestine, liver, gallbladder and parts of your nervous system. Knowing this, it’s no surprise that dandelion is excellent medicine for your liver and digestion. Dandelion belongs to a group of herbs known as “bitters”. What’s happening with obesity? – The Ozarks Sentinel. 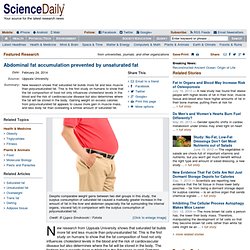 This is the first study on humans to show that the fat composition of food not only influences cholesterol levels in the blood and the risk of cardiovascular disease but also determines where the fat will be stored in the body. The findings have recently been published in the American journal Diabetes. The study involved 39 young adult men and women of normal weight, who ate 750 extra calories per day for seven weeks. The goal was for them to gain three per cent of their starting weight. Obesity epidemic becomes worldwide phenomenon - health - 08 January 2014. Much of the world should go on a diet in 2014. 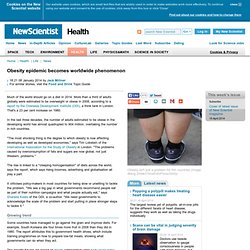 More than a third of adults globally were estimated to be overweight or obese in 2008, according to a report by the Overseas Development Institute (ODI), a think tank in London. That's a 23 per cent increase on 1980. In the last three decades, the number of adults estimated to be obese in the developing world has almost quadrupled to 904 million, overtaking the number in rich countries. "The most shocking thing is the degree to which obesity is now affecting developing as well as developed economies," says Tim Lobstein of the International Association for the Study of Obesity in London. "The problems caused by overconsumption of fats and sugars are now global, not just Western, problems. " The rise is linked to a "creeping homogenisation" of diets across the world, says the report, which says rising incomes, advertising and globalisation all play a part.

Growing trend Some countries have managed to go against the grain and improve diets. Vegan Weight Loss. There is no question that a vegan diet is the healthiest and most compassionate choice for us. Vegans are less likely to have problems such as heart disease and cancer, and we are more likely to keep to a healthy weight. Some of us, however, need a little extra help with weight loss. I have found three different types of diet plans to be effective in their own ways: the well-balanced Weight Watchers system, the vegan, high-carbohydrate, low-fat McDougall program, and the low-carbohydrate, high-protein "Atkins" type diet. I am making no claims to the safety of any diet program, but instead want to introduce each plan and share a little real-life experience. Article continues below Weight Watchers Our esteemed editor, Erin Pavlina, spent several months on the Weight Watchers Winning Points system.

A quick rundown of the Winning Points system is as follows: You are given a range of points based on your current weight that you must stay within each day. Sounds pretty veg-friendly already. Vegetarian Starter Kit. Of the many ways to lose weight, one stands out as by far the most healthful. When you build your meals from a generous array of vegetables, fruits, whole grains, and beans—that is, healthy vegetarian choices—weight loss is remarkably easy.

And along with it come major improvements in cholesterol, blood pressure, blood sugar, and many other aspects of health. 23115-1375126603-49. Diet vs. Exercise for Weight Loss. When asked whether food and beverage consumption or physical activity was more important, the majority of people get the answer wrong. 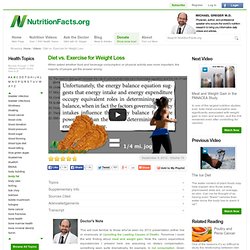 Topics Supplementary Info Sources Cited Acknowledgements Transcript. Mediterranean Diet Study is Full of It. It's all over the news -- new research shows the Mediterranean Diet is heart-healthy, and it "reduces cardiovascular events by 30%" compared to a low-fat diet. 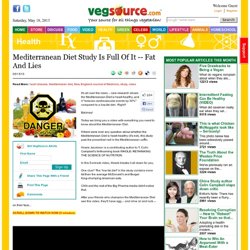 Right? Baloney! Today we bring you a video with everything you need to know about the Mediterranean Diet. If there were ever any question about whether the Mediterranean Diet is heart-healthy (it's not), this study puts the proverbial nail in the Mediterranean coffin. Howie Jacobson is a contributing author to T. In this 5-minute video, Howie breaks it all down for you. One clue? CNN and the rest of the Big Pharma media didn't notice that. After your friends who champion the Mediterranean Diet see this video, they'll have egg -- and olive oil and nuts -- on their face... SCROLL DOWN TO WATCH NOW (5 minutes): Thousands of Vegans Studied. A More Scientific Obesity Test Says: It's Even Worse Than You Think.