Science and Nonduality. Stillness Speaks. Www.nonduality.com Perhaps the most mature and clear resource for information on Gurus, authors, reviews and announcements tracking what is happening in nonduality and advaita. 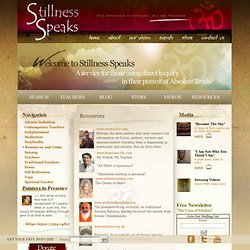 Run by Jerry Katz www.francislucille.com My Friend, My Teacher "All Effort is Ignorance" "Absolutely nothing is personal" www.pamelasatsang.com The Queen of Heart www.arshavidhyapitam.org The premiere living authority on traditional Advaita Vedanta, having received the mantle from Swami Chinmayanda. www.advaita.org.uk Fantastic, deep website on all thinga advaita selflessly maintained by Dennis Waite www.shiningworld.com. Free Awareness - Recognizing What Is Always Already Present.

Nonduality: The Varieties of Expression.  Life Without a Centre. The Aletheon: The Truth Book of Avatar Adi Da. [After the Ruchira Dham Event of April 12, 2000,] My Divine Avataric Self-Revelation-Word Became a completely different kind of Utterance.Most essentially, My Divine Avataric Self-Revelation-Word has Become The Aletheon.— Avatar Adi Da Samraj The Aletheon During the final two years of a Lifetime that had been utterly devoted to the Communication of Truth, Avatar Adi Da created His supreme Scripture — a book of oceanic depth and magnitude. 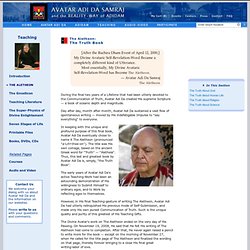 Day after day, month after month, Avatar Adi Da sustained a vast flow of spontaneous writing — moved by His indefatigable Impulse to "say everything" to everyone. In keeping with the unique and profound purpose of this final book, Avatar Adi Da eventually chose to name it The Aletheon (pronounced "a-LAY-thee-on"). The title was His own coinage, based on the ancient Greek word for "Truth" — "Aletheia". Thus, this last and greatest book by Avatar Adi Da is, simply, "the Truth Book". In This Section: Privacy Policy Terms of Service Contact Web Team Sitemap. 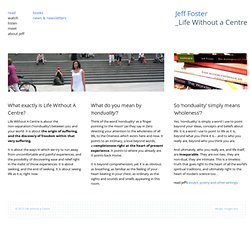 Life Without A Centre is about the non-separation (‘nonduality’) between you and your world. It is about the origin of suffering, and the discovery of freedom within that very suffering. It is about the ways in which we try to run away from uncomfortable and painful experiences, and the possibility of discovering ease and relief right in the midst of those experiences. It is about seeking, and the end of seeking. It is about seeing life as it is, right now. What do you mean by ‘nonduality’? Think of the word ‘nonduality’ as a ‘finger pointing to the moon’ (as they say in Zen) directing your attention to the wholeness of all life, to the Oneness which exists here and now.

It is beyond comprehension, yet it is as obvious as breathing, as familiar as the feeling of your heart beating in your chest, as ordinary as the sights and sounds and smells appearing in this room. So ‘nonduality’ simply means ‘wholeness’? Read jeff’s essays, poetry and other writings. Non-Duality America. Mindfulness (psychology) Mindfulness as a psychological concept is the focusing of attention and awareness, based on the concept of mindfulness in Buddhist meditation.[1] It has been popularised in the West by Jon Kabat-Zinn.[2] Despite its roots in Buddhism, mindfulness is often taught independently of religion.[3][4] Clinical psychology and psychiatry since the 1970s have developed a number of therapeutic applications based on mindfulness for helping people suffering from a variety of psychological conditions.[5] Several definitions of mindfulness have been used in modern psychology. 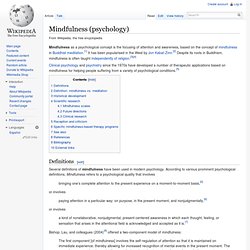 According to various prominent psychological definitions, Mindfulness refers to a psychological quality that involves bringing one’s complete attention to the present experience on a moment-to-moment basis,[6] or involves paying attention in a particular way: on purpose, in the present moment, and nonjudgmentally,[6] Bishop, Lau, and colleagues (2004)[8] offered a two-component model of mindfulness: