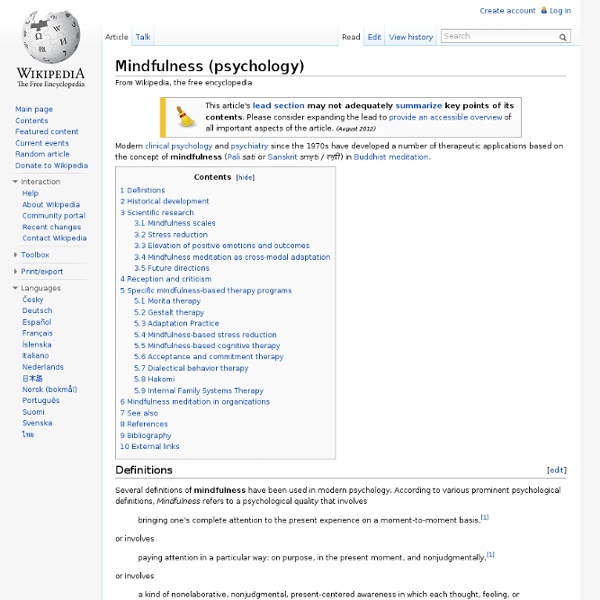 Mindfulness as a psychological concept is the focusing of attention and awareness, based on the concept of mindfulness in Buddhist meditation.[1] It has been popularised in the West by Jon Kabat-Zinn.[2] Despite its roots in Buddhism, mindfulness is often taught independently of religion.[3][4] Clinical psychology and psychiatry since the 1970s have developed a number of therapeutic applications based on mindfulness for helping people suffering from a variety of psychological conditions.[5] Several definitions of mindfulness have been used in modern psychology. According to various prominent psychological definitions, Mindfulness refers to a psychological quality that involves bringing one’s complete attention to the present experience on a moment-to-moment basis,[6] or involves paying attention in a particular way: on purpose, in the present moment, and nonjudgmentally,[6] Bishop, Lau, and colleagues (2004)[8] offered a two-component model of mindfulness:

Thoughts on Consciousness So yesterday, I went to a lecture about consciousness by a neuroscientist called Murray Shanahan, from Imperial College. It was about how consciousness is constructed within the brain, how networks of neurons connect together to create hierarchies of thought and other such clever stuff. To be honest, most of it went right over my head. Total mindfuck.

Positive Psychology Exercise - Emoclear Self-Helpapedia Emoclear Positve Psychology Exercise I: Doing Pleasurable, Important, and Meaningful Activities Every day for two weeks do the following: 1. Choose a pleasurable activity to do alone and do it to completion. Example: Gardening or writing.2. What Exactly Is Visualization? I love a good visualization. I’ve always been fascinated by those images that manage to inform and entertain at the same time. From time to time I’ve tried to supply tips and insight to help those interested in creating better visualizations. One morning while researching data visualizations I thought to myself “what really makes up visualization”, is it definable? The Aletheon: The Truth Book of Avatar Adi Da [After the Ruchira Dham Event of April 12, 2000,] My Divine Avataric Self-Revelation-Word Became a completely different kind of Utterance.Most essentially, My Divine Avataric Self-Revelation-Word has Become The Aletheon.— Avatar Adi Da Samraj The Aletheon During the final two years of a Lifetime that had been utterly devoted to the Communication of Truth, Avatar Adi Da created His supreme Scripture — a book of oceanic depth and magnitude. Day after day, month after month, Avatar Adi Da sustained a vast flow of spontaneous writing — moved by His indefatigable Impulse to "say everything" to everyone. In keeping with the unique and profound purpose of this final book, Avatar Adi Da eventually chose to name it The Aletheon (pronounced "a-LAY-thee-on").

The Last Lecture: A Positive Psychology Case Study My colleague Ben Dean and I recently conducted an Internet survey of 1464 adults interested in positive psychology that asked what they would most like to know about this new field. A large number wanted compelling case examples of actual people who lived life well, who embodied the strengths of character that we have been studying with quantitative methods. The world's greatest teachers, from Socrates and Jesus to the present, have always used parables to instruct and inspire others, and in the disciplines of business and law, the detailed examination of particular cases is the preferred method of teaching. Data visualization Data visualization or data visualisation is viewed by many disciplines as a modern equivalent of visual communication. It is not owned by any one field, but rather finds interpretation across many (e.g. it is viewed as a modern branch of descriptive statistics by some, but also as a grounded theory development tool by others). It involves the creation and study of the visual representation of data, meaning "information that has been abstracted in some schematic form, including attributes or variables for the units of information".[1] A primary goal of data visualization is to communicate information clearly and efficiently to users via the information graphics selected, such as tables and charts. Effective visualization helps users in analyzing and reasoning about data and evidence. It makes complex data more accessible, understandable and usable.

Stillness Speaks www.nonduality.com Perhaps the most mature and clear resource for information on Gurus, authors, reviews and announcements tracking what is happening in nonduality and advaita. Run by Jerry Katz www.francislucille.com My Friend, My Teacher "All Effort is Ignorance" "Absolutely nothing is personal" Culture Vaults : Resonant Frequencies and the Human Brain One of the great revelations of 20th century science is that all existence can be broken down into simple wave functions. Every photon, energy emission, and elementary particle rings with its own unique wave signature. When we see a color, we are actually seeing a distinct frequency of visible light. When we hear a sound, our eardrums are actually being vibrated by subtle waves in the air molecules around us. Even the neurochemical processes of human consciousness ­ our very thoughts ­ ring with their own distinct wave patterns.

Feature Story: Writing to Heal: Research shows writing about emotional experiences can have tangible health benefits For nearly 20 years, Dr. James W. Pennebaker has been giving people an assignment: write down your deepest feelings about an emotional upheaval in your life for 15 or 20 minutes a day for four consecutive days. Many of those who followed his simple instructions have found their immune systems strengthened. Data, Information, Knowledge and Wisdom From SystemsWiki by Gene Bellinger, Durval Castro, Anthony Mills There is probably no segment of activity in the world attracting as much attention at present as that of knowledge management. Yet as I entered this arena of activity I quickly found there didn't seem to be a wealth of sources that seemed to make sense in terms of defining what knowledge actually was, and how was it differentiated from data, information, and wisdom. What follows is the current level of understanding I have been able to piece together regarding data, information, knowledge, and wisdom. I figured to understand one of them I had to understand all of them.

Mirror neuron A mirror neuron is a neuron that fires both when an animal acts and when the animal observes the same action performed by another.[1][2][3] Thus, the neuron "mirrors" the behavior of the other, as though the observer were itself acting. Such neurons have been directly observed in primate species.[4] Birds have been shown to have imitative resonance behaviors and neurological evidence suggests the presence of some form of mirroring system.[4][5] In humans, brain activity consistent with that of mirror neurons has been found in the premotor cortex, the supplementary motor area, the primary somatosensory cortex and the inferior parietal cortex.[6] The function of the mirror system is a subject of much speculation. Discovery[edit]

Related:
Related:  non-duality   -  Habit   -  What It Takes to Form a Good Habit   -  Mind Your En And Em Dashes: Typographic Etiquette | Smashing Magazine   -  Obsessive- Compulsive’s Guide: Top 12 Organizing Tips, Plus Resources : zenhabits   -  25 Killer Actions to Boost Your Self-Confidence   -  Beeminder   -  Sign up for a free account   -  Creativity Tools for Developing Creative Solutions from MindTools.com   -  The 8 Habits of Highly Productive People | Personal Excellence   -  iPad Tips And Tricks | 100 Essential | TCGeeks   -  50 Free Apps We're Most Thankful For   -  Pretentious Title: How I Went From Writing 2,000 Words a Day to 10,000 Words a Day   -  Online Meetings & Webinar Software - Fast & Free with MeetingBurner   -  How To Organize Your Files - Organize With Sandy : Organize With Sandy   -  10 iPad Apps for Web Curation   -  GuideGuide   -  Create Your Own Smartphone App With Infinite Monkeys - No Coding Knowledge Required   -  Problem loading page   -  Start Every Day as a Producer, Not a Consumer   -  Five Best Productivity Methods   -  Habits: How They Form And How To Break Them : NPR   -  How To Create A Habit In 15 Days | Dragos Roua   -  Skitch - Snap. Mark up. Send.   -  How to Train Your Brain and Boost Your Memory Like a USA Memory Champion   -  Microsoft OneNote: Save Ideas and Organize Notes - Apps on Google Play   -  Customer Support Software & Ticketing System | Freshdesk   -  35 Great iPad Apps for Designers, Geeks and Creative Individuals - Creative CanCreative Can   -  Slice - Track Your Stuff (Packages, Purchases, Price Drops)   -  How to Use Text Expansion to Save Yourself Hours of Typing Every Week   -  GTasks: Todo List & Task List   -  Springpad: Everyday life, done better   -  Wunderlist: To-Do List & Tasks - Apps on Google Play   -  7 Free iPad Apps for Educators and Students - The Edublogger   -  10 Ways You Should Never Describe Yourself   -  Dé werkplek voor al je werk   -  What multitasking does to our brains - The Buffer Blog   -  Business Model Fiddle