Nibiru Fragment To Strike Earth in February, Says Russian Astronomer. Monday was an important day for NASA and an alarming date for the whole mankind. 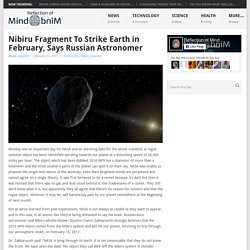 A rogue celestial object has been identified spiraling towards our planet at a disturbing speed of 26,000 miles per hour. The object which has been dubbed 2016 WF9 has a diameter of more than a kilometer and the most southern parts of the planet can spot it on their sky. NASA was unable to pinpoint the origin and nature of the anomaly, even their brightest minds are perplexed and cannot agree on a single theory. It was first believed to be a comet because it’s dark but then it was noticed that there was no gas and dust cloud behind it, the trademarks of a comet. They still don’t know what it is, but apparently they all agree that there’s no reason for concern and that the rogue object, whatever it may be, will harmlessly pass by our planet somewhere at the beginning of next month. Dr. Dr. “The Nibiru system is filled with asteroids and dust. Dr. Dr. Source: Curious tilt of the sun traced to undiscovered planet. Planet Nine—the undiscovered planet at the edge of the Solar System that was predicted by the work of Caltech's Konstantin Batygin and Mike Brown in January 2016—appears to be responsible for the unusual tilt of the sun, according to a new study. 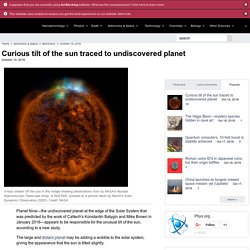 The large and distant planet may be adding a wobble to the solar system, giving the appearance that the sun is tilted slightly. "Because Planet Nine is so massive and has an orbit tilted compared to the other planets, the solar system has no choice but to slowly twist out of alignment," says Elizabeth Bailey, a graduate student at Caltech and lead author of a study announcing the discovery. All of the planets orbit in a flat plane with respect to the sun, roughly within a couple degrees of each other. That plane, however, rotates at a six-degree tilt with respect to the sun—giving the appearance that the sun itself is cocked off at an angle.

Until now, no one had found a compelling explanation to produce such an effect. Planet X just revealed by Google Sky? Black swath gone, ‘winged disk’ visible. Update April 4, 2016 from the editor: Fact: In no way shape or form does this article or has this article ever claimed that this object is planet X for sure; hence the question-mark in the title and the closing line which reads: “Although we can’t say for sure that this is Nibiru, it sure does match all descriptions.” 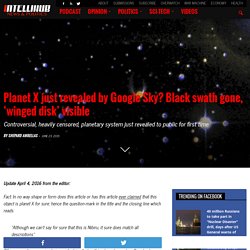 Other accusations, received via email, claim that nothing has changed on Google sky, although anyone with any sort of knowledge knows that Google Sky is manipulated often and can change daily. ExoNews TV. Debunked: Giant Black Sphere Hovering Near the Sun. Yes you are, you are just looking down it from the other side. 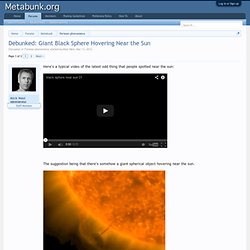 Look at this again See the huge band going around the sun. Now imagine a tubular void above that ("above" meaning further out from the sun, not above in the image), also continuing around the sun. At the prominence you'd be looking one way down the dark tube, and from the other side, you'd be looking the other way. Breaking - Unidentified Object SUN! March 11, 2012 - YouTube.webm. Does Nibiru Exist? Nibiru Location Confirmation. By: David VeritasContributor Profile | More Stories Wednesday, June 12, 2013 23:22 (ALTHeadlines) There are many theories attempting to figure out the location of the Twelfth Planet, Nibiru. 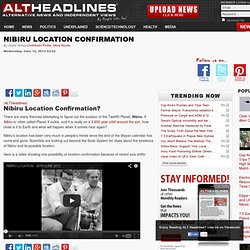 If Nibiru or often called Planet X exists, and it is really on a 3,600-year orbit around the sun, how close is it to Earth and what will happen when it comes near again? Nibiru’s location has been very much in people’s minds since the end of the Mayan calendar has come and gone. Planet X Uncovered Top Stories. The existence of Nibiru or Planet X as it is often called, is fueled by much anticipation and clues found in ancient mythology and more recently with reported sightings, new evidence and previously undisclosed archives being made public. 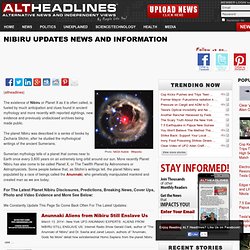 The planet Nibiru was described in a series of books by Zecharia Sitchin, after he studied the mythological writings of the ancient Sumerians. Sumerian mythology tells of a planet that comes near to Earth once every 3,600 years on an extremely long orbit around our sun. More recently Planet Nibiru has also come to be called Planet X, or The Twelfth Planet by Astronomers or Astrophysicists. Some people believe that, as Sitchin’s writings tell, the planet Nibiru was populated by a race of beings called the Anunnaki, who genetically manipulated mankind and created man as we are today.