MOOCs’ disruption is only beginning. MOOC Research Proposal (business model) Coursera Jumps the Shark. The MOOC Guide. MassiveOpenOnlineCourses. Yishay Mor “Are MOOCs really adequate to open up the educational scene as they seem to promise?” MOOCs' many challenges in developing world. While MOOCs are new, scholars have wrestled with questions about cultural barriers for years in the OER community. 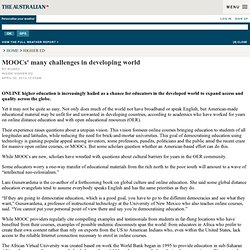 Some educators worry a one-way transfer of educational materials from the rich north to the poor south will amount to a wave of “intellectual neo-colonialism.” Lani Gunawardena is the co-author of a forthcoming book on global culture and online education. She said some global distance education evangelists tend to assume everybody speaks English and has the same priorities as they do. “If they are going to democratise education, which is a good goal, you have to go to the different democracies and see what they want,” Gunawardena, a professor of instructional technology at the University of New Mexico who also teaches online courses, said.

“You cannot put your personal point of view there and say you’re democratising education.” The African Virtual University was created based on work the World Bank began in 1995 to provide education in sub-Saharan African. Major Players in the MOOC Universe - The Digital Campus 2013. Is Higher Education Ready For Rapid Evolution of xMOOCs? Recently I wrote a post arguing that xMOOCs such as Coursera, edX and Udacity will likely evolve and that “while the current examples of massive online courses are interesting, the real potential of MOOCs will be revealed in future generations.” 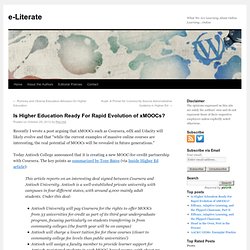 Today Antioch College announced that it is creating a new MOOC-for-credit partnership with Coursera. The key points as summarized by Tony Bates (via Inside Higher Ed article): This article reports on an interesting deal signed between Coursera and Antioch University. Antioch is a well-established private university with campuses in four different states, with around 4,000 mainly adult students. Tony has some interesting comments on the development (read the whole post), but I’d like to call out that the rapid evolution culture of venture capital backed companies is quite different than the deliberate approach of higher education.

Research to Inspire Learning. A Tale of Two MOOCs @ Coursera: Divided by Pedagogy. The Web as a classroom is transforming how people learn, is driving the need for new pedagogy; two recently launched courses at Coursera highlight what happens when pedagogical methods fail to adapt. 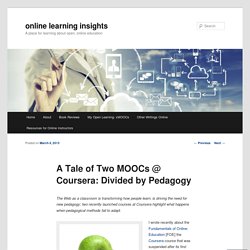 Divided pedagogy I wrote recently about the Fundamentals of Online: Education [FOE] the Coursera course that was suspended after its first week and is now in MOOC hibernation mode. Over thirty thousands students signed up for the course hoping to learn how to develop an online course. It was a technical malfunction when students were directed to sign-up for groups through a Google Doc that shuttered the course, along with hundreds of student complaints about lack of clear instructions, and poor lecture quality.

The course was suspended on February 2, and there has been no word yet as to when it will resume :(. Sentimental campus: Dublin February 19 by Sian Bayne on Prezi. Imogen Bertin: Confused of Cork: Quitting #edcmooc. I'm going to delete these MOOC blogs in a couple of weeks because they aren't interesting. 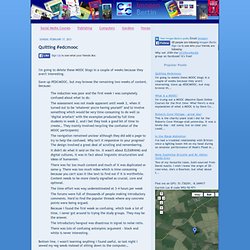 Gave up #EDCMOOC, but may browse the remaining two weeks of content, because: The induction was poor and the first week I was completely confused about what to do.The assessment was not made apparent until week 2, when it turned out to be "whatever you're having yourself" and to involve something which would be very time consuming to do well (a "digital artefact" with the examples produced by full time students in week 2, and I bet they took a good bit of time to create… They mainly involved recycling the confusion of the MOOC participants)The navigation remained unclear although they did add a page to try to help the confused.

Why isn't it responsive to your progress? The design involved a great deal of scrolling and remembering.It didn't do what it said on the tin. Martin Bean, Vice-Chancellor Open University, on Futurelearn. Blog Posted by FutureLearn14 Feb 2013 Martin Bean. 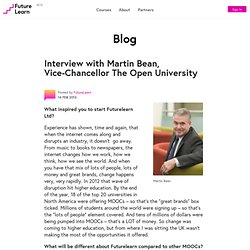 Quality Control in MOOCs. Like traditional education institutions, identity and reputation are important in MOOCs. 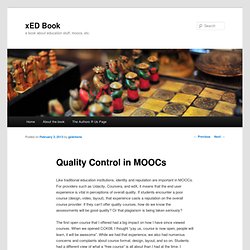 For providers such as Udacity, Coursera, and edX, it means that the end user experience is vital in perceptions of overall quality. If students encounter a poor course (design, video, layout), that experience casts a reputation on the overall course provider. If they can’t offer quality courses, how do we know the assessments will be good quality? My open learning « catherinecronin. Like many educators I know, the start of 2013 has been about MOOCs. 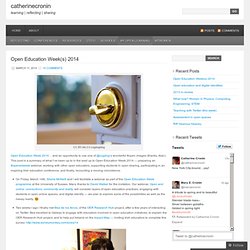 I’ve been participating in #etmooc — the Educational Technology & Media MOOC started by Alec Couros, Alison Seaman and a great team, and #edcmooc — E-learning & Digital Cultures, organised by another great team at the University of Edinburgh (and hosted by Coursera). Both have gotten off to lively starts, with thousands participating and activity spread across Google+ Communities, Twitter, Facebook, course blogs and thousands of participant blogs, among other places.

24 Hours – A long time in online learning. I’ve been taking the Coursera course Fundamentals of Online Education for the last week. 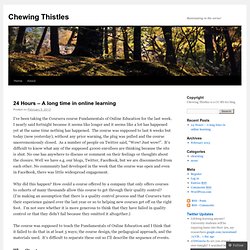 I nearly said fortnight because it seems like longer and it seems like a lot has happened yet at the same time nothing has happened. The course was supposed to last 6 weeks but today (now yesterday), without any prior warning, the plug was pulled and the course unceremoniously closed. As a number of people on Twitter said, “Wow! Just wow!”. A Bill of Rights and Principles for Learning in the Digital Age. On December 14, 2012, a group of 12 assembled in Palo Alto for a raucous discussion of online education. 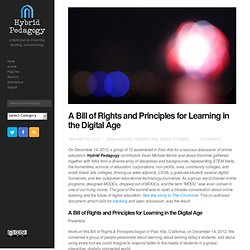 Hybrid Pedagogy contributors Sean Michael Morris and Jesse Stommel gathered together with folks from a diverse array of disciplines and backgrounds, representing STEM fields, the humanities, schools of education, corporations, non-profits, ivies, community colleges, and small liberal arts colleges. Among us were adjuncts, CEOs, a graduate student, several digital humanists, and two outspoken educational technology journalists. As a group, we’d chaired online programs, designed MOOCs, dropped out of MOOCs, and the term “MOOC” was even coined in one of our living rooms. The goal of the summit was to open a broader conversation about online learning and the future of higher education.

See the story in The Chronicle. WhatIsConnectivism. Education for a Digital Age? Do MOOCs inherently help develop digital literacies? 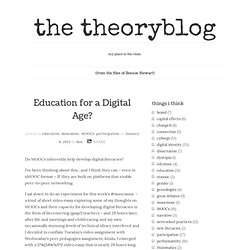 I’ve been thinking about this…and I think they can – even in xMOOC format – IF they are built on platforms that enable peer-to-peer networking. I sat down to do an experiment for this week’s #moocmooc – a kind of short video essay exploring some of my thoughts on MOOCs and their capacity for developing digital literacies in the form of decentering (gasp!) Teachers – and 28 hours later, after life and meetings and childrearing and my own occasionally stunning levels of technical idiocy interfered and I decided to conflate Tuesday’s video assignment with Wednesday’s peer pedagogies assignment, kinda, I emerged with a $*&($#&%$*)!

Video essay that is nearly 28 hours long. Everybody Wants to MOOC the World. You may have seen this week’s announcement from Instructure of their new Canvas Network to support MOOCs and other open courses. Blackboard has already been dipping its toe in this water, having had Curtiss Bonk run a MOOC on CourseSites. I also find it significant that Blackboard (somewhat awkwardly) made an attempt to remind the market of this fact on the same day as Instructure’s announcement. I predict that “MOOC” will reach the same level of hype at this year’s EDUCAUSE conference that “open” did last year. But hype aside, it’s worth asking what it means for the traditional LMS players to be marketing themselves as platforms for MOOCs and other open courses.

The LMS Instructure Enters the MOOC Fray. Not content with being the young upstart in the LMS industry taking on the aging giants of Blackboard and Desire2Learn, Instructure has now decided to enter another market and take on some of the upstarts there, namely Coursera and edX. That is, tonight it launches the Canvas Network, which in the words of CEO Josh Coates, is “our answer to the whole MOOC hype.” It’s an answer that Instructure’s current clients have helped devise, too, Coates says, noting that many of the schools that run its LMS Canvas are pondering that hype and weighing whether they should join the Coursera or edX platform (or fear being left out of the MOOC race entirely).

In many cases, these schools already offer online classes to their own students, but simply don’t have the reach — the marketing reach or the instructional reach — that the xMOOCs promise. The Canvas Network. Gates foundation solicits remedial MOOCs. How To Build MOOC's that Fail. 'UnderAcademy College' Satirizes Massive Open Online Courses - Wired Campus. George Siemens "Designing, development, and running (massive) open Online Courses.

U. of Maine campus experiments with small-scale, high-touch open courses. Designing and Running a MOOC. Daphne Koller: What we're learning from online education. First humanities MOOC professors road-test Coursera's peer grading model. Udacity and Online Pedagogy: Players, Learners, Objects. Learning as Performance: MOOC Pedagogy and On-ground Classes. MOOCs, Coursera, Online Education and Performing Innovation. MOOCs: Learning Points. Three Kinds of MOOCs « Lisa's. Why I failed a MOOC. With all the hype abound at the moment about MOOCs I wanted to try one for the experience, as well as in preparation for perhaps being involved in delivering one or, crikey, running one myself. So, I enrolled on the Hybrid Pedagogy MOOC, that is “a MOOC about MOOCs … over the course of one week, MOOC MOOC will explore the pedagogical approach, the sustainability of the form, and alternatives to MOOCs.”