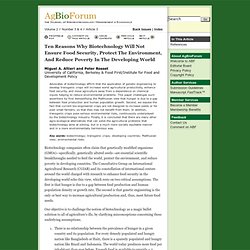 Altieri and Peter Rosset University of California, Berkeley & Food First/Institute for Food and Development Policy Advocates of biotechnology affirm that the application of genetic engineering to develop transgenic crops will increase world agricultural productivity, enhance food security, and move agriculture away from a dependence on chemical inputs helping to reduce environmental problems. This paper challenges such assertions by first demystifying the Malthusian view that hunger is due to a gap between food production and human population growth. 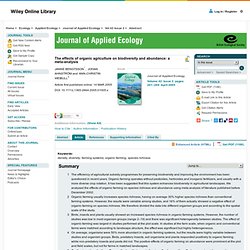 We used the following key-words: biodiversity, biological diversity, conventional farming (agriculture), organic farming (agriculture). We also followed the literature in the field and searched the reference lists of relevant articles. For a study to be included in the analysis, it had to give data on species richness and diversity or abundance at at least a nominal scale. Long-term effects of organic and conventional farming on soil erosion. Does organic farming reduce environmental impacts? Advantages and Disadvantages Organic Farming: Its Pros and Cons. Advantages and Disadvantages Organic Farming Despite the good things about organic farming why do most farmers still operate by industrialized agriculture? 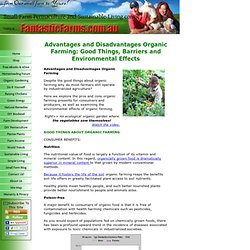 Here we explore the pros and cons organic farming presents for consumers and producers, as well as examining the environmental effects of organic farming. Right>> An ecological organic garden where the vegetables sow themselves! Watch the video. Nutrition. Environmental impact of conventional and organic farming on the land used. Organic Farming Not So Wildlife Friendly, Study Finds. The case for so-called organic farming has always been pretty weak, and a new study in Ecology Letters isn't helping the cause. 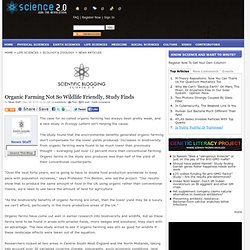 The study found that the environmental benefits generated organic farming don't compensate for the lower yields produced. Environment and Natural Resouces Series No. 4. Organic agriculture and climate change Global climate change is considered one of the most urgent environmental problems. 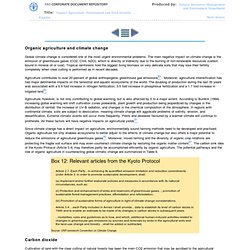 The main negative impact on climate change is the emission of greenhouse gases (CO2, CH4, N2O), which is directly or indirectly due to the burning of non-renewable resources (carbon bound in mineral oil or coal). Tropical rainforests hold the biggest living biomass on very delicate soils that may lose their fertility completely when clear cutting is performed as in recent decades. Agriculture contributes to over 20 percent of global anthropogenic greenhouse gas emissions89 . Moreover, agricultural intensification has had major detrimental impacts on the terrestrial and aquatic ecosystems of the world. Organic Farming May Not Be As Beneficial As It Seems. Contrary to popular belief, organic farming may not necessarily be better for the environment. ... to According to a research study out of the United Kingdom's Oxford University, researchers have stated that organic farming has similar benefits as well as similar environmental impacts when compared to conventional farming. 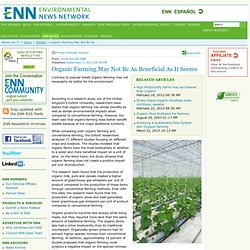 However, the team said that organic farming does better benefit wildlife because of the crops' additional nutrients. The environmental footprint of organic vs. conventional food. Comparing the environmental impacts of two products involves many considerations: chemical runoff into our water supply, soil health and greenhouse gas emissions, to name just a few. 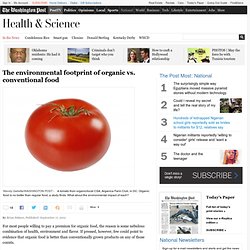 Since there isn’t enough space to consider all of those in a single article, we’ll take one environmental consideration at a time in an occasional series. Land use is a reasonable place to begin. Part of a product’s environmental impact is the amount of space required to produce it. Organic food no more nutritious than conventionally grown food. Ditccom20032_en. Boom and Bust: the future of our food producing ecosystems – One Billion Hungry: Can We Feed the World? 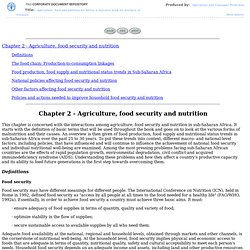 The Organic Myth. Next time you're in the supermarket, stop and take a look at Stonyfield Farm yogurt. 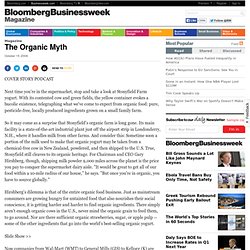 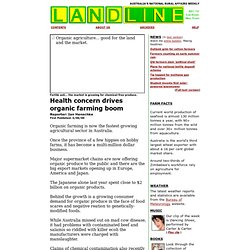 Health concern drives organic farming boom Reporter: Ian Henschke First Published: 4/06/00 Organic farming is now the fastest growing agricultural sector in Australia. Once the province of a few hippies on hobby farms, it has become a multi-million dollar business. Major supermarket chains are now offering organic produce to the public and there are the big export markets opening up in Europe, America and Japan. The Japanese alone last year spent close to $2 billion on organic products. Behind the growth is a growing consumer demand for organic produce in the face of food scares and negative reation to genetically-modified foods. While Australia missed out on mad cow disease, it had problems with contaminated beef and salamis so riddled with killer ecoli the manufacturers were charged with manslaughter. Claims of chemical contamination also recently rocked the wine industry.

The great organic myths: Why organic foods are an indulgence the world can't afford - Green Living - Environment - The Independent. Myth one: Organic farming is good for the environment The study of Life Cycle Assessments (LCAs) for the UK, sponsored by the Department for Environment, Food and Rural Affairs, should concern anyone who buys organic. It shows that milk and dairy production is a major source of greenhouse gas emissions (GHGs). A litre of organic milk requires 80 per cent more land than conventional milk to produce, has 20 per cent greater global warming potential, releases 60 per cent more nutrients to water sources, and contributes 70 per cent more to acid rain. German farmers can′t keep up with organic boom. Organic apples from Argentina, tomatoes from Spain – when looking at the assortment in German organic supermarkets, consumers are easily confused.

Even though one might want to make ecologically correct and sustainable decisions when shopping, many of the fruits and vegetables have travelled a long way, leaving a considerable carbon footprint. German grocers are not just importing the exotic produce such as bananas and mangoes that are impossible to grow in Germany, but also potatoes, apples and cucumbers, as well as pork and dairy products. According to a recent study by the University of Bonn, every second organic apple sold in Germany is an import. While sales of these products have tripled in Germany, farmland used to grow organic products has increased to just 6.3 percent of land under cultivation. Organic food industry booming in Brazil. Organic food industry booming in Brazil Send to a friend November 21st, 2012 Brazil’s Ministry of Agricultural Development (MDA) has announced the country’s market for organic products is growing at an annual rate of 15-20%, media organization Agencia Brasil reported.

The Brazilian organic market moves around BRL500 million (US$240 million) worth of products each year and is supplied by around 90,000 farmers, of which about 85% are agricultural families. MDA added value director Arnoldo de Campos made the comments during the seminar ‘Organic and Sustainable Brazil in Rio de Janeiro this week. “Thanks to the growth of the economy we have a significant growth in the middle class, and when people have more income they are more demanding,” he was quoted as saying. Super foods boom in popularity. CAN I have a green, dairy-free smoothie with a dose of chia seeds, sprinkle of flaxseed, dollop of coconut oil and topped with bee pollen? What might have been an order only overheard in a hippy-laden vegetarian cafe is now becoming a common request in cafes, restaurants and homes across Australia.

Australia's organic and health food movement has been steadily increasing in popularity for a while but the past few years have seen a considerable uptake in a range of strange-sounding seeds, nuts and powders: otherwise known as super foods. No longer are these nuts, grains and foods, suitable for intolerances, contained to the bulk food shelves in health food stores. Demand has pushed the products into the isles of supermarkets. Kerin Hood is the manager of Wray Organic, an Ipswich store that only stocks chemical-free, nutritious products. Ms Hood said customer numbers had been growing at an unbelievable rate since the supermarket opened in April 2011. But people should not be fooled. Organic food boom predicted. The Truth About Organic Foods - Pros and Cons of Organic Food. Health food boom: Grocers expand choices to meet demand. After celebrating their 25th wedding anniversary in Indianapolis on Monday, Ron and Kat Gordon made one last stop before heading home to Logansport.