This was a pre-Swowden study. After his leaks, this tree became more like an archive

Meet Jack. Or, What The Government Could Do With That Location Data. Start Here. Modesto Police Department Correspondence with Predictive Policing Company PredPol, Inc. Business - Mobile Enterprise Apps. Biometrics nightmare: coming to a street corner near you. Think you can escape the biometrics matrix because you've never been arrested, or because you are a US citizen? 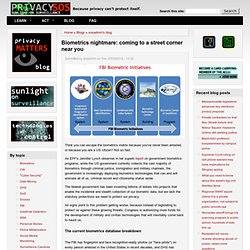 Not so fast. As EFF's Jennifer Lynch observes in her superb report on government biometrics programs, while the US government currently collects the vast majority of biometrics through criminal justice, immigration and military channels, the government is increasingly deploying biometrics technologies that can and will ensnare all of us, criminal record and citizenship status aside. The federal government has been investing billions of dollars into projects that enable the incidental and stealth collection of our biometric data, but we lack the statutory protections we need to protect our privacy. All signs point to this problem getting worse, because instead of legislating to protect us against these growing threats, Congress is authorizing more funds for the development of military and civilian technologies that will inevitably come back to haunt us.

People from the FTC to the EFF were there to answer the question: What attributes of privacy policies and terms of service should people care about? This lead to a proposal presented for the W3C, among other places, which further refined the notion. We are now ready to propose an alpha version of Privacy Icons that takes into account the feedback and participation we’ve received along the way. How A 'Deviant' Philosopher Built Palantir, A CIA-Funded Data-Mining Juggernaut. On thin ice. Spy Files 3: WikiLeaks Sheds More Light On The Global Surveillance Industry. In this article, Maria Xynou looks at WikiLeaks' latest Spy Files and examines the legality of India's surveillance technologies, as well as their potential connection with India's Central Monitoring System (CMS) and implications on human rights. 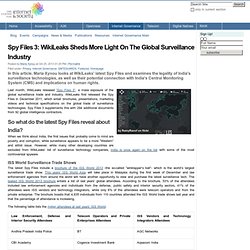 Last month, WikiLeaks released “Spy Files 3”, a mass exposure of the global surveillance trade and industry. WikiLeaks first released the Spy Files in December 2011, which entail brochures, presentations, marketing videos and technical specifications on the global trade of surveillance technologies. Spy Files 3 supplements this with 294 additional documents from 92 global intelligence contractors. So what do the latest Spy Files reveal about India? When we think about India, the first issues that probably come to mind are poverty and corruption, while surveillance appears to be a more “Western” and elitist issue. ISS World Surveillance Trade Shows. NSA files decoded: Edward Snowden's surveillance revelations explained. Two factors opened the way for the rapid expansion of surveillance over the past decade: the fear of terrorism created by the 9/11 attacks and the digital revolution that led to an explosion in cell phone and internet use. 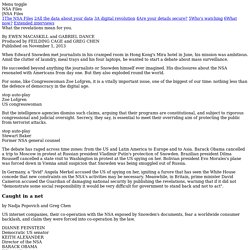 But along with these technologies came an extension in the NSA’s reach few in the early 1990s could have imagined. Details that in the past might have remained private were suddenly there for the taking. Chris Soghoian.

Sensitive Handheld Signal Jammer of CDMA / GSM / DCS / PHS / WiFi / 3G. The killer of mobile phones or smartphones! Specially designed for shielding of CDMA / GSM / DCS / PHS / WiFi / 3G signals with different brands, the handheld jammer can cut off the cellular phones' signals with large effective coverage and flexible control. Install the four antennas and turn on the mobile signal jammer, you can adjust the intensity of isolation manually.

Although a common handheld device, the jammer can be made use of building jamming, or square jamming and so on. Signal jammer is widely to be used in many occasions such as entrance, adult college entrance examination, self-examination and various tertiary institutions; party and government organs, and all kinds of small, medium and large conference rooms, concert halls, theaters; detection centers, brigades, small, medium and large prison; gas stations, oil depots, oil fields, filling stations and other inflammable and explosive places. Features Specifications. Goverments mass tracking. Mubarack 2.0. Face recognition. 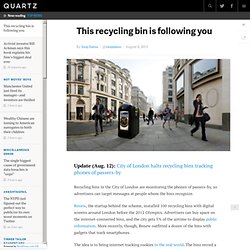 Renew, the startup behind the scheme, installed 100 recycling bins with digital screens around London before the 2012 Olympics. Advertisers can buy space on the internet-connected bins, and the city gets 5% of the airtime to display public information. More recently, though, Renew outfitted a dozen of the bins with gadgets that track smartphones. The idea is to bring internet tracking cookies to the real world. Here, an image from Renew’s marketing materials makes it plain: The technology, developed by London-based Presence Aware, is supposed to help advertisers hone their marketing campaigns.

“From our point of view, it’s open to everybody, everyone can buy that data,” Memari told Quartz. Jamesbridle: Warchalking Renew bins...