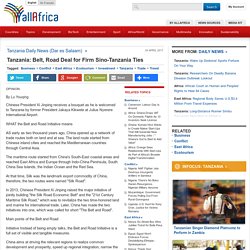 WHAT the Belt and Road Initiative means AS early as two thousand years ago, China opened up a network of trade routes both on land and at sea. The land route started from Chinese inland cities and reached the Mediterranean countries through Central Asia. The maritime route started from China's South-East coastal areas and reached East Africa and Europe through Indo-China Peninsula, South China Sea Islands, the Indian Ocean and the Red Sea. At that time, Silk was the landmark export commodity of China, therefore, the two routes were named "Silk Road". In 2013, Chinese President Xi Jinping raised the major initiative of jointly building "the Silk Road Economic Belt" and the "21st Century Maritime Silk Road," which was to revitalize the two time-honored land and marine for international trade. 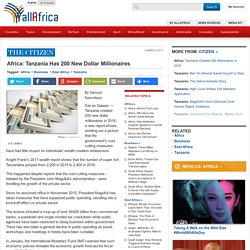 Knight Frank's 2017 wealth report shows that the number of super rich Tanzanians jumped from 2,200 in 2015 to 2,400 in 2016. Tanzania: Dar es Salaam Institute of Technology Set to Introduce Vehicle Jam-Sensing Traffic Lights. Ludo — In the light of supporting the government agenda of industrial revolution, the Dar es Salaam Institute of Technology (DIT) has started to manufacture and install modern traffic lights with the capacity to sense traffic jams. 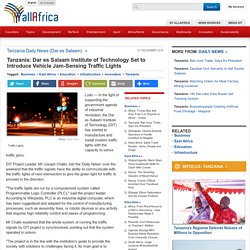 DIT Project Leader, Mr Joseph Challo, told the 'Daily News' over the weekend that the traffic signals have the ability to communicate with the traffic lights of next intersection to give the green light for traffic to proceed in the direction. "The traffic lights are run by a computerised system called Programmable Logic Controller (PLC)," said the project leader. According to Wikipedia, PLC is an industrial digital computer, which has been ruggedised and adapted for the control of manufacturing processes, such as assembly lines, or robotic devices or any activity that requires high reliability control and eases of programming. 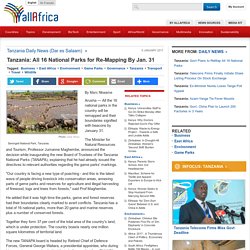 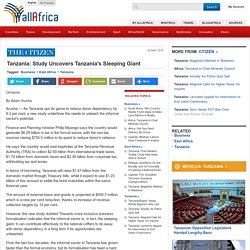 Finance and Planning minister Philip Mpango says the country would generate $6.29 billion in tax in the formal sector, with the non-tax sources raising $755.5 million in its quest to reduce donor's reliance. He says the country would seal loopholes at the Tanzania Revenue Authority (TRA) to collect $2.59 billion from international trade taxes, $1.74 billion from domestic taxes and $2.36 billion from corporate tax, withholding tax and levies. In terms of borrowing, Tanzania will raise $1.47 billion from the domestic market through Treasury bills, while it expect to use $1.23 billion of this amount to settle the bond maturities within the same financial year. 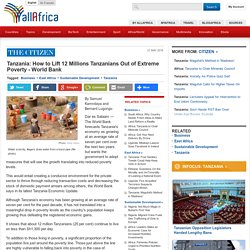 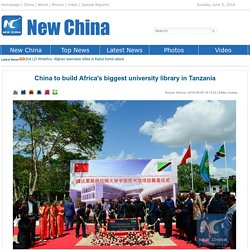 (Xinhua/Zhai Jianlan) DAR ES SALAAM, June 5 (Xinhua) -- Tanzanian President John Magufuli has laid the foundation stone for the construction of a new library at the University of Dar es Salaam (UDSM), the biggest of its kind in Africa to be built at a cost of about 40 million U.S. dollars. President Magufuli said project, wholly funded by the Chinese government, had come at the right time as the government was working hard to improve the country's education standard.

Once completed, the state-of-the-art facility will boast a space of 20,000 square meters and house over 800,000 books, he said on Thursday in the project's ground-breaking ceremony. Tanzania: Study Uncovers Tanzania's Sleeping Giant. Tanzania: How to Lift 12 Millions Tanzanians Out of Extreme Poverty - World Bank. Tanzania: City Suburb Becomes Investment Zone. By Zephania Ubwani Arusha — With the old tiled roofing houses and ample space that is characteristic of any low-density suburb, the area along Old Moshi Road (recently renamed Julius Nyerere Road) in Arusha remained what it was designed for from the colonial times and in the post-independence era: a residential area for senior government officials and well-to-do business people. 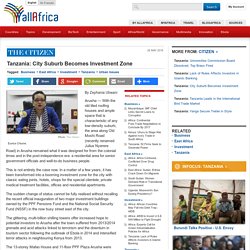 This is not entirely the case now. In a matter of a few years, it has been transformed into a booming investment zone for the city with classic eating joints, hotels, shops for the special clientele, private medical treatment facilities, offices and residential apartments. Kigamboni Bridge Tanzania, East Africa’s Longest Suspension Bridge. Tanzania: 'Prepare for Population Boom' The Tanzania Coalition for Demographic Awareness and Action (TCDAA) has asked the government to see the importance of taking action in managing the challenges and seize the opportunities of Tanzania's rapidly changing population in order to satisfy the needs of everyone. 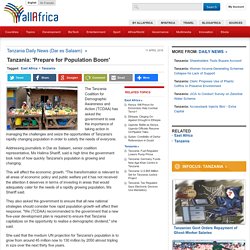 Addressing journalists in Dar es Salaam, senior coalition representative, Ms Halima Shariff, said is high time the government took note of how quickly Tanzania's population is growing and changing. This will affect the economic growth. Tanzania: Govt to Seize, Redistribute All Idle Land. By Gadiosa Lamtey Tanzania will in April embark on a nationwide audit to identify undeveloped parcels of land exceeding 50 acres. 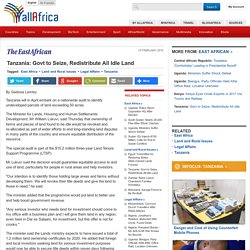 The Minister for Lands, Housing and Human Settlements Development, Mr William Lukuvi, said Thursday that ownership of farms and pieces of land found to be idle would be revoked and re-allocated as part of wider efforts to end long-standing land disputes in many parts of the country and ensure equitable distribution of the resource. Tanzania Sets Out to Ban Use of Harmful Plastic Bags. Dar es Salaam — Tanzanian authorities said on Sunday that they were planning to completely ban the use of environmentally harmful plastic bags. "We will borrow a leaf from our neighbouring Rwanda that has successfully eliminated the use of such bags," said January Makamba, the east African nation's Minister for Environment. Makamba said he has ordered officials at the National Environment Management Council (NEMC) to come up with a plan on how to tackle the disposal of plastic bags in the country.

"We want to first do research and understand how best to handle the use of plastic bags by shoppers. We will borrow a leaf from Rwanda on how they succeeded," said Makamba. Non-biodegradable polythene bags are illegal in Rwanda. Tanzania schools ordered to reduce fees - Africa. Private schools in Tanzania have been ordered to reduce fees as a part of a government review of education. The education ministry has also banned state schools from seeking contributions from parents. Free government primary education was introduced in 2002, and from January the annual fees of $19 (Sh1,900) will be abolished at secondary level too. Most state schools request contributions of about $100 (Sh10,000) a year, which many cannot afford. The country’s new President John Magufuli has promised to overhaul the education sector, where standards are low and resources stretched in state schools. Parents who can afford it, opt to send their children to private schools, where they have a better chance of passing national examinations.

But the government is worried that some private institutions charge parents for services they do not deliver. Education Commissioner Eustela Bhalausesa said private schools will submit their intended fees for next year for review from December 16. No more Christmas for Tanzania – Hapa Kazi tu! In many ways it is another new dawn for Tanzania, reminiscent of the days of Mwalimu Julius Nyerere, Tanzania’s founding president, a man famed for his spendthrift ways and his idealism. On October 29, 2015, Magufuli was announced the 5th President of the United Republic of Tanzania.

The announcement was received with excitement by many Tanzanians. There was, to be sure, grumbling. Edward Lowassa, who carried the banner for the opposition coalition, UKAWA, claimed the polls had been stolen. Magufuli’s win was accompanied by a first: Tanzania got their first female vice president, Hon. John Magufuli. The president’s visits to ministries and institutions used to be a pageant: there would be a long entourage of cars filled with various dignitaries.

Tanzania: Outrage in Tanzania Elite As Magufuli Intensifies Rwandanisation. Opinion There is disbelief in Tanzania as newly elected President John Pombe Magufuli breaks with the past - introducing policies which a growing base of displeased elites are angrily branding as "arrogance". The latest in President Magufuli's trove of surprises is the suspension of the December 9th independence day celebrations, according to media reports.

The president has instead decreed that on that day everybody should pick up their tools and clean their backyards. Tanzania's Magufuli scraps independence day celebration. Image copyright AFP Tanzania's newly elected President John Magufuli has cancelled independence day celebrations, and has ordered a clean-up campaign instead. It would be "shameful" to spend huge sums of money on the celebrations when "our people are dying of cholera", he said, state television reported. Cholera has killed about 60 people in Tanzania in the last three months. Tanzania’s wealth per capita has increased 92% over the last 15 years. Tanzania’s top 100 mid-sized companies winners revealed. The top five awards were scooped by Softnet Technologies Ltd, Morogoro Plastics Ltd, Kays Logistics Ltd, Abacus Pharma Ltd and Techno Brain Tanzania Ltd.

The Top 100 mid-sized companies awards are presented to companies which have successfully managed to achieve growth whilst adopting corporate governance in their business operations. Tanzania: Investment Centre Registers Over 300 Trillion/ - Projects in 10 Years. By Masato Masato. How Tanzania doubled its wealth in only 15 years. Letter from Africa: The farmer who wants to lead Tanzania. In our series of letters from African journalists, broadcaster and media trainer Joseph Warungu spotted an ordinary farmer hoping to become Tanzania's next president.

Tanzania’s GDP Expands By 32% After Rebasing. Tanzania joins Africa’s great GDP revision. Business - Dar to issue revised GDP this November. Tanzania new electricity plan: US$1.4bn a year on generation. In East Africa, Tanzania plans to spend around US$1.4 billion a year on power generation as part of a new roadmap to drive the country’s energy sector forward. The newly released energy blueprint, dubbed Electricity Supply Industry Reform Strategy and Roadmap 2014-2025, shows that the government hopes to increase installed generation capacity from the current 1,583 MW to more than 10,000 MW over the next 11 years, according to local media source East Africa Business Week.

The document shows that nearly 4,000 MW will be generated from natural gas and 200 MW from geothermal. 'Solar entrepreneur' powers own home. Invest in the Lake Zone where Investment is a profitable venture. SIDO. Tanzania to target investment through Special Economic Zones. Mtwara, on Tanzania's Indian Ocean coast, has been selected to host one of three new Special Economic Zones.

3.Ms.Zawadiananyaro,Tanzania.pdf. Will Tanzania's new stock exchange platform help start-ups? Tanzania Plans to Set Up Massive Gas Plant. Tanzania’s energy ministry has revealed plans to set up liquefied natural gas plants in the country in collaboration with BG Group, Statoil, Axon and Ophir among other partners. Tanzania is “thinking of building one industrial area, like what you have in Qatar, where you have all these (LNG) plants, petrochemical industries,” said George Simbachawene, the deputy minister for energy and minerals. The Manta Resort, Pemba, Zanzibar (Don't miss the end!) Business Television - Online Corporate Video Reports. Alternative Energy Africa. $15bn for construction of Tanzania gas plant - News - www.theeastafrican.co.ke. Www.africareport.com video - Natureripe, Tanzania.