Adjacency pairs. In pragmatics, a branch of linguistics, an adjacency pair is an example of conversational turn-taking. 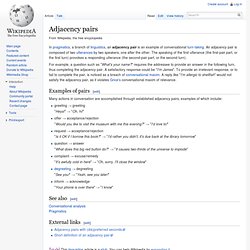 An adjacency pair is composed of two utterances by two speakers, one after the other. The speaking of the first utterance (the first-pair part, or the first turn) provokes a responding utterance (the second-pair part, or the second turn). For example, a question such as "What's your name? " requires the addressee to provide an answer in the following turn, thus completing the adjacency pair. A satisfactory response could be "I'm James". Examples of pairs[edit] Many actions in conversation are accomplished through established adjacency pairs, examples of which include: greeting → greeting "Heya! " offer → acceptance/rejection "Would you like to visit the museum with me this evening? 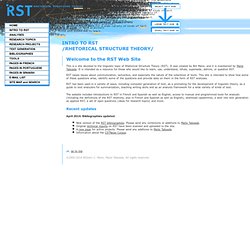 It was created by Bill Mann, and it is maintained by Maite Taboada. It is intended as a resource for those who would like to learn, use, understand, refute, supersede, admire, or question RST. RST raises issues about communication, semantics, and especially the nature of the coherence of texts. This site is intended to show how some of these questions arise, identify some of the questions and provide data on them in the form of RST analyses. RST has been used in a variety of ways, including computer generation of text, as a prompting for the development of linguistic theory, as a guide to text analyzers for summarization, teaching writing skills and as an analysis framework for a wide variety of kinds of text. 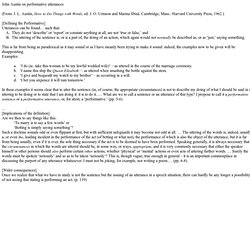 L. Austin, How to Do Things with Words, ed. J. O. [Defining the Performative] Utterances can be found… such that: They do not ‘describe’ or ‘report’ or constate anything at all, are not ‘true or false,’ and The uttering of the sentence is, or is a part of, the doing of an action, which again would not normally be described as, or as ‘just,’ saying something. This is far from being as paradoxical as it may sound or as I have meanly been trying to make it sound: indeed, the examples now to be given will be disappointing.

Examples: a. B. C. D. In these examples it seems clear that to utter the sentence (in, of course, the appropriate circumstances) is not to describe my doing of what I should be said in so uttering to be doing or to state that I am doing it: it is to do it. … What are we to call a sentence or an utterance of this type? [Implications of the definition] Are we then to say things like this: DiesingWandW. Ship naming and launching. Ceremonial ship launching is the process of transferring a vessel to the water. 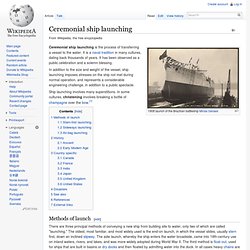 It is a naval tradition in many cultures, dating back thousands of years. It has been observed as a public celebration and a solemn blessing. In addition to the size and weight of the vessel, ship launching imposes stresses on the ship not met during normal operation, and represents a considerable engineering challenge, in addition to a public spectacle. Methods of launch[edit] Stern-first launching[edit] Normally they are arranged perpendicular to the shore line (or as nearly so as the water and maximum length of vessel allows) and the ship is built with its stern facing the water. On launching, the vessel slides backwards down the slipway on the ways until it floats by itself.[3] Sideways launching[edit] Some slipways are built so that the vessel is side on to the water and is launched sideways. Air-bag launching[edit] History[edit] Ancient[edit] Early Modern Age[edit] Country specific[edit] The Science of Sarcasm? Yeah, Right.