Neil deGrasse Tyson on linguists and Arrival. This is a guest post submitted by Nathan Sanders and colleagues. 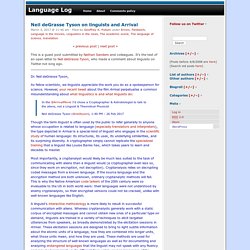 It's the text of an open letter to Neil deGrasse Tyson, who made a comment about linguists on Twitter not long ago. Dr. Neil deGrasse Tyson, As fellow scientists, we linguists appreciate the work you do as a spokesperson for science. However, your recent tweet about the film Arrival perpetuates a common misunderstanding about what linguistics is and what linguists do: In the @ArrivalMovie I'd chose a Cryptographer & Astrobiologist to talk to the aliens, not a Linguist & Theoretical PhysicistNeil deGrasse Tyson (@neiltyson), 1:40 PM – 26 Feb 2017 Though the term linguist is often used by the public to refer generally to anyone whose occupation is related to language (especially translators and interpreters), the type depicted in Arrival is a special kind of linguist who engages in the scientific study of human language: its structures, its uses, its underlying similarities, and its surprising diversity. 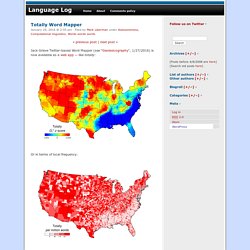 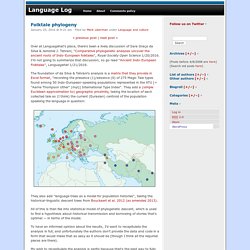 Tehrani, "Comparative phylogenetic analyses uncover the ancient roots of Indo-European folktales", Royal Society Open Science 1/20/2016. The concept of "mother" in linguistics. « previous post | next post » I began drafting this post around Mother's Day, which we recently observed, but got distracted by other things. 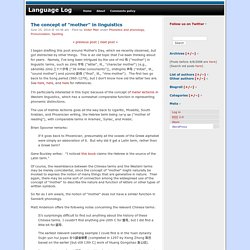 The first two go back to the Song period (960-1279), but I don't know how old the latter two are. See here, here, and here for references. The use of matres lectionis goes all the way back to Ugaritic, Moabite, South Arabian, and Phoenician writing, the Hebrew term being אֵם קְרִיאָה ("mother of reading"), with comparable terms in Aramaic, Syriac, and Arabic. The concept of "mother" in linguistics. Vanessa Ruiz. « previous post | next post » Fernanda Santos and Christine Hauser, "Arizona News Anchor Is Drawn Into Debate on Her Accent and the Use of Spanish", NYT 9/3/2015: An Arizona news anchor defended her pronunciation of Spanish words during English broadcasts, saying she delivers them the way the language is intended to be spoken. […] Ms. 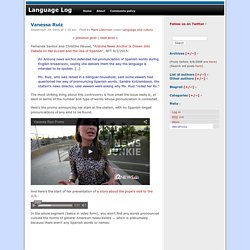 Ruiz, who was raised in a bilingual household, said some viewers had questioned her way of pronouncing Spanish words. Participles, conveying urgency? « previous post | next post » The first two and last two panels of today's Doonesbury: The idea that short phrases convey urgency is a well-established principle of writing advice, e.g. here and here. 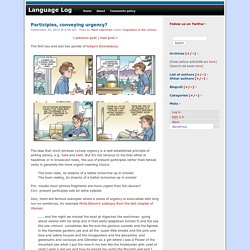 But it's not obvious to me that either in headlines or in broadcast news, the use of present participles rather than tensed verbs is generally the more urgent-seeming choice: The town reels, its dreams of a better tomorrow up in smoke! The town reeling, its dreams of a better tomorrow up in smoke! Pro: maybe noun-phrase fragments are more urgent than full clauses? Also, there are famous examples where a sense of urgency is associated with long run-on sentences, for example Molly Bloom's soliloquy from the last chapter of Ulysses: Anyhow, I wonder what the distribution of phrase lengths and participial phrases in recent news broadcasts is — a good topic for someone's term paper!

For future reference, against eventual link rot, the whole Doonesbury strip is here. Typical options like â€œheâ€� and â€œsheâ€� « previous post | next post » Collin Binkley, "He? 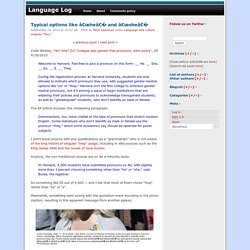 You use the present tense, you persuade people to save money. « previous post | next post » We've had some discussion lately about the sports subjunctive/baseball conditional/bare paratactic conditional. 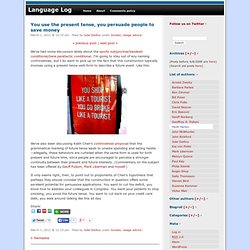 I'm going to stay out of any naming controversies, but I do want to pick up on the fact that this construction typically involves using a present tense verb form to describe a future event. Like this: We've also been discussing Keith Chen's controversial proposal that the grammatical marking of future tense leads to unwise spending and eating habits—allegedly, these behaviors are curtailed when the same form is used for both present and future time, since people are encouraged to perceive a stronger continuity between their present and future interests.

(Commentary on the subject has been offered by Geoff Pullum, Mark Liberman and myself.) It only seems right, then, to point out to proponents of Chen's hypothesis that perhaps they should consider that the construction in question offers some excellent potential for persuasive applications. The QWERTY effect. « previous post | next post » Rebecca Rosen, "The QWERTY Effect: The Keyboards Are Changing Our Language! 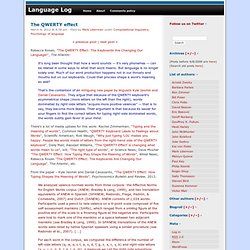 ", The Atlantic: It's long been thought that how a word sounds — it's very phonemes — can be related in some ways to what that word means. But language is no longer solely oral. Much of our word production happens not in our throats and mouths but on our keyboards. A non-mathematical theory of communication. « previous post | next post » According to Claude Shannon, "A Mathematical Theory of Communication", Bell System Technical Journal 1948: The fundamental problem of communication is that of reproducing at one point either exactly or approximately a message selected at another point. 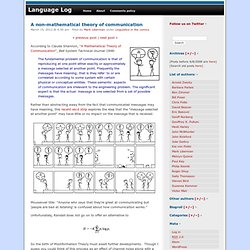 Frequently the messages have meaning; that is they refer to or are correlated according to some system with certain physical or conceptual entities. These semantic aspects of communication are irrelevant to the engineering problem. The signiﬁcant aspect is that the actual message is one selected from a set of possible messages.

Rather than abstracting away from the fact that communicated messages may have meaning, this recent xkcd strip explores the idea that the "message selected at another point" may have little or no impact on the message that is received: QWERTY: Failure to replicate. « previous post | next post » Following up on "The QWERTY effect", 3/8/2012, I got this email earlier today from Peter Dodds: I just saw your piece on these curious QWERTY findings re positivity. I see you used the ANEW data set, and this has prompted me to point to our much larger data set (just over 10,000 words) that we have for positivity/happiness (I've been meaning to write for a while).

I've attached the scores and the relevant paper is here: Dodds et al., "Temporal Patterns of Happiness and Information in a Global Social Network: Hedonometrics and Twitter", PLoS ONE 2011. Sweden’s gender-neutral 3rd-person singular pronoun. « previous post | next post » Slate has an article lambasting Sweden's growing enthusiasm for total gender neutrality, and it raises the profile of a move, actually originating in the mid 1960s, to get hen established as a new pronoun meaning "he/she/it", eliminating the forced choice between han "he" and hon "she".

I don't know which I would say is likely to be more difficult: eliminating gender stereotypes and inequalities from society or getting a neologism established by fiat in the set of pronouns in a language. And I don't know Sweden (never been there) and I don't know Swedish (never studied it). Apart from that, I don't have anything interesting to say on this potentially very interesting linguistic topic in the news. The obvious thing to do, for anyone who was not a hidebound opponent of the vox populi and all-round blue meanie, would be to open the comments column on the subject so we could hear from some Swedish-competent or Swedish-resident readers, wouldn't it?

Big Data in the humanities and social sciences. « previous post | next post » I'm in Berkeley for the DataEDGE Conference, where I'm due to participate in a "living room chat" advertised as follows: Size Matters: Big Data, New Vistas in the Humanities and Social SciencesMark Liberman, Geoffrey Nunberg, Matthew SalganikVast archives of digital text, speech, and video, along with new analysis technology and inexpensive computation, are the modern equivalent of the 17th-century invention of the telescope and microscope. We can now observe social and linguistic patterns in space, time, and cultural context, on a scale many orders of magnitude greater than in the recent past, and in much greater detail than before.

This transforms not just the study of speech, language, and communication but fields ranging from sociology and empirical economics to education, history, and medicine — with major implications for both scholarship and technology development. The place and time of Proto-Indo-European: Another round. « previous post | next post » A note yesterday from Russell Gray: Hi Mark, we have a paper out in Science today. I've attached a copy plus a link to a website where we give a more accessible account of the paper. I expect this will be rather controversial again but we have been very thorough both with improving the quality of the data and with testing the robustness of our geographic inferences. The link is That link goes to an excellent and freely-available site, which contains essentially all of the information in the Science paper, presented in a more accessible way with additional background. The Science paper is Bouckaert, R., Lemey, P., Dunn, M., Greenhill, S. Universal alphabet.

« previous post | next post » Not that I think this is any sort of panacea, but our good friends at BBC have seen fit to ask: "Could a new phonetic alphabet promote world peace? " Although backers of this supposed universal alphabet claim that "it will make pronunciation easy and foster international understanding", I have doubts that SaypU (Spell As You Pronounce Universal project) constitutes a viable route to world peace.

It is curious that SaypU, which uses 24 letters, dispenses with precisely those three letters that give persons who are unfamiliar with Pinyin (official PRC Romanization for Mandarin) the most trouble: "c", "q", and "x". How the first letter was written. Scandinavian influence on English syntax. Mandarin by the numbers. Elmore Leonard, 1925-2013. Computational linguistics and literary scholarship. "I feel like" QWERTY again. Now it's cows that use names (sigh) The unpredictability of Chinese character formation and pronunciation. Keith Chen, Whorfian economist. Reverse English. Alyssa “talks backwards” Proto-Indo-European in Prometheus? Thought experiments on language and thought.