New study on low noise and high-performance transistors could bring innovations in electronics, sensing. How to encrypt your entire life in less than an hour. Cambridge Analytica and Online Manipulation. Bitcoin losing favor on the dark web among cybercriminals. Install Webmin on Ubuntu 17.10 (Artful Aardvark) Server. Sponsored Link Webmin is a web-based interface for system administration for Unix. 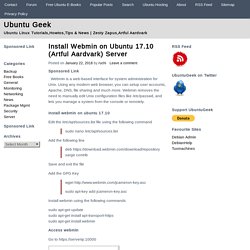 Using any modern web browser, you can setup user accounts, Apache, DNS, file sharing and much more. Webmin removes the need to manually edit Unix configuration files like /etc/passwd, and lets you manage a system from the console or remotely.Install webmin on ubuntu 17.10 Edit the /etc/apt/sources.list file using the following command sudo nano /etc/apt/sources.list. KRACK WPA2 security flaw puts Wi-Fi devices at risk of hijack. A security protocol at the heart of most modern Wi-Fi devices, including computers, phones, and routers, has been broken, putting almost every wireless-enabled device at risk of attack. 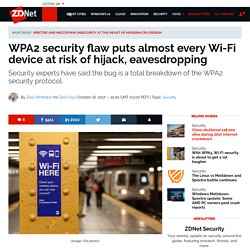 The bug, known as "KRACK" for Key Reinstallation Attack, exposes a fundamental flaw in WPA2, a common protocol used in securing most modern wireless networks. 5G networks could bring 'unlimited data' to your phone in 2019. When it comes to 5G networks, there's something beyond pure speed to get excited about. 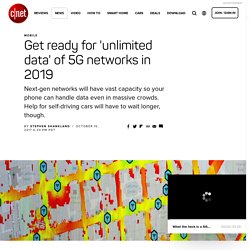 Next-generation mobile networks will be able to accommodate a lot more people and a lot more data as carriers like Verizon, T-Mobile and AT&T and manufacturers like Nokia and Ericsson improve the total capacity of the network. That means your phone won't be fighting against all the others trying to send and receive data. Get ready to update, because Google Drive dies next March - CNET. If you're among the hundreds of millions of people using Google Drive to synchronize files across your PCs and phones, be warned: you've now got three months to install its replacement. 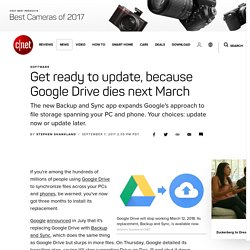 Google announced in July that it's replacing Google Drive with Backup and Sync, which does the same thing as Google Drive but slurps in more files. On Thursday, Google detailed its transition plan, saying it'll stop supporting Drive on Dec. 11 and shut it down completely on March 12, 2018. The new approach lets Google's software synchronize files you've stored on your desktop or your documents folders and make all your photos part of Google Photos, too.

And it reflects the growing importance of cloud-based services. In bygone days your files were anchored to a single computing device, but with services like Google Backup and Sync, Dropbox, Microsoft OneDrive and Apple iCloud, your PC or phone is becoming just the tool you happen to be using to edit a photo or write a letter or share a tweet. Equifax data breach may affect up to 143 million people - CNET. Now Playing: Watch this: Equifax breach: Were you one of the 143 million affected? 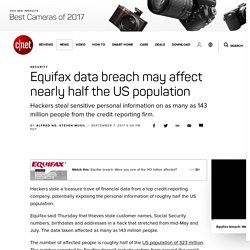 Hackers stole a treasure trove of financial data from a top credit-reporting company, potentially exposing the personal information of roughly half the US population. Equifax said Thursday that thieves stole customer names, Social Security numbers, birthdates and addresses in a hack that stretched from mid-May and July. Shadow IT: It's Much Worse Than You Think. The number of unauthorized cloud apps being used in the enterprise is 15 to 20 times higher than CIOs predicted, according to a Cisco report. 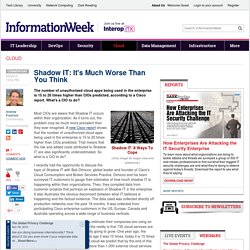 What's a CIO to do? Shadow IT: 8 Ways To Cope (Click image for larger view and slideshow.) Local shared object. Local shared objects (LSOs), commonly called Flash cookies (due to their similarities with HTTP cookies), are pieces of data that websites which use Adobe Flash may store on a user's computer. 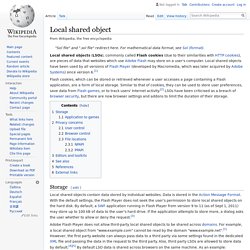 Local shared objects have been used by all versions of Flash Player (developed by Macromedia, which was later acquired by Adobe Systems) since version 6.[1] Flash cookies, which can be stored or retrieved whenever a user accesses a page containing a Flash application, are a form of local storage. Similar to that of cookies, they can be used to store user preferences, save data from Flash games, or to track users' Internet activity.[2] LSOs have been criticised as a breach of browser security, but there are now browser settings and addons to limit the duration of their storage. Storage[edit] Local shared objects contain data stored by individual websites. 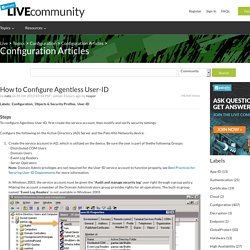 Configure the following on the Active Directory (AD) Server and the Palo Alto Networks device: Create the service account in AD, which is utilized on the device. The chips are down for Moore’s law. Install GLPI (IT and asset Managemet Software) on Ubuntu 16.04 Server. Sponsored Link GLPI stands for “Gestionnaire libre de parc informatique”, GLPI is the Information Resource Manager with an additional Administration- Interface. 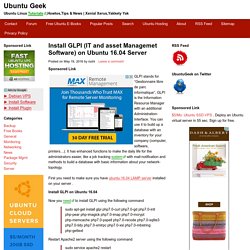 You can use it to build up a database with an inventory for your company (computer, software, printers…). It has enhanced functions to make the daily life for the administrators easier, like a job tracking system with mail-notification and methods to build a database with basic information about your network-topology. First you need to make sure you have ubuntu 16.04 LAMP server installed on your server . Install GLPI on Ubuntu 16.04. Install Webmin on Ubuntu 16.04 (Xenial Xerus) Server. Sponsored Link Webmin is a web-based interface for system administration for Unix. 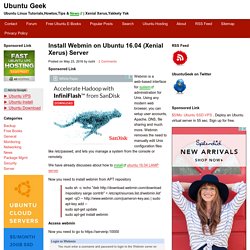 Borg Backup – Deduplicating backup program. Sponsored Link. Linux All-in-One For Dummies (a $25.99 value) FREE! Eight minibooks in one volume cover every important aspect of Linux and everything you need to know to pass level-1 certification.Linux All-in-One For Dummies explains everything you need to get up and running with the popular Linux operating system. Written in the friendly and accessible For Dummies style, the book ideal for new and intermediate Linux users, as well as anyone studying for level-1 Linux certification. The eight minibooks inside cover the basics of Linux, interacting with it, networking issues, Internet services, administration, security, scripting, and level-1 certification. Incoming search terms: ubunto16 Related posts. Ubuntu After Install – Simple Ubuntu Post installation Script. Sponsored Link Automated installation a lot of useful extra software on Ubuntu after the initial desktop install.This program installs a collection of some of the best Ubuntu software and can be considered to be one of the top things to do after installing Ubuntu.

The announcement marks an important milestone in the U.S. Government’s effort to complete the transition of the Internet’s domain name system and ensure that the Internet remains a platform for innovation, economic growth, and free speech. Promiscuous detection 01. AI and the Future of Operating Systems. AI and the Future of Operating Systems. Software Defined Networking - A New Network Weakness? Network virtualization, under the umbrella of Software Defined Networking (SDN), presents an opportunity for network innovation but at the same time introduces a new weakness which will more than likely be targeted once solutions become more commercially available. Whether the underlying technologies used are OpenFlow or Overlay Virtual network, network virtualization solutions are based on a network controller which can be attacked in different ways.

Data governance. Debian abandona Linux Standard Base. Doxing. Doxing (from dox, abbreviation of documents),[1] doxxing or docxing,[2][3] is the Internet-based practice of researching and broadcasting private or identifiable information (especially personally identifiable information) about an individual or organization.[3][4][5][6][7] Doxing may be carried out for various reasons, including to aid law enforcement, business analysis, extortion, coercion, harassment, online shaming, and vigilante justice.[8][9] Etymology[edit]