Management and pedagogy of iPads in schools. If you are planning on buying multiple iPads for your school you need to do a bit of planning around the management, administration and pedagogical integration of the iPad in your classroom. 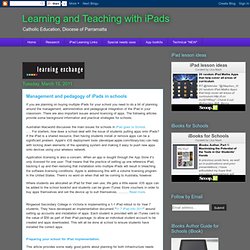 There are also important issues around licencing of apps. The following articles provide some background information and practical strategies for schools: Australian Macworld discusses the main issues for schools in iPad goes to School...... For starters, how does a school deal with the issue of students putting apps onto iPads? If the iPad is a shared resource, then having students install or remove apps can be a significant problem. Application licensing is also a concern. Where students are allocated an iPad for their own use, life gets a little easier. iOS apps can be added to the school booklist and students can be given iTunes Store vouchers in order to buy apps themselves and set the device up to suit themselves. .......... Preparing your school for iPad implementation. The Challenge of iPad Pedagogy. Staff training completed. 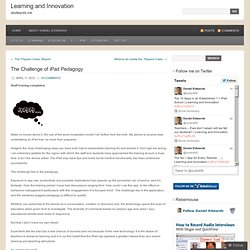 Make no bones about it, the use of the word completed couldn’t be further from the truth. My advice to anyone else undertaking an iPad trial, be more than prepared. Imagine the most challenging class you have ever had to personalise learning for and double it. Don’t get me wrong, I am extremely grateful for the vigour with which the staff and students have approached the training at such a busy time. It isn’t the device either. The challenge lies in the pedagogy.

Exposure to app use, productivity and possible implications has opened up the proverbial can of worms, and it’s fantastic. Whether you subscribe to the device as a consumption, creation or discovery tool, the technology opens the eyes of educators when given time to investigate. Not that I didn’t have my own ideas! It just feels like the trial has a real chance of success and not because of the new technology. So what to do next? It’s a challenge and it’s not about the technology! Like this: Like Loading... How to Use iPads in the Classroom. 1:1 iPad use in Full Day Kindergarten. Background. 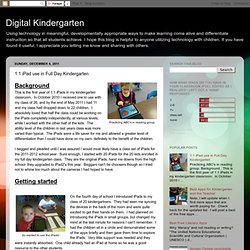 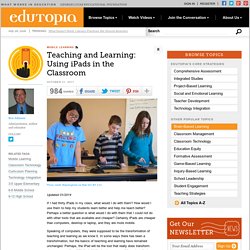 How would I use them to help my students learn better and help me teach better? Perhaps a better question is what would I do with them that I could not do with other tools that are available and cheaper? Certainly iPads are cheaper than computers, desktop or laptop, and they are more mobile. Speaking of computers, they were supposed to be the transformation of teaching and learning as we know it.

Kinesthetic Learners The iPad has a number of unique features that provide for interesting possibilities in teaching and learning. As a completely portable learning tool, the iPad camera allows documentation to be taken to a whole different level. Students can also attach videos, and voice recordings to their field notes. iPads in the Classroom.

It's the Pedagogy, Stupid: Lessons from an iPad Lending Program. Recently, we were tasked with developing policies and procedures for an equipment lending program initiated within the Faculty Technology Resources Center at the University of Cincinnati. 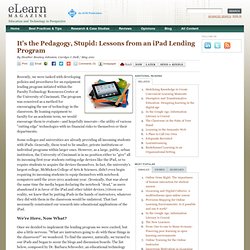 The program was conceived as a method for encouraging the use of technology in the classroom. By loaning equipment to faculty for an academic term, we would encourage them to evaluate—and hopefully innovate—the utility of various "cutting edge" technologies with no financial risks to themselves or their departments. Some colleges and universities are already providing all incoming students with iPads. Generally, these tend to be smaller, private institutions or individual programs within larger ones. However, as a large, public, urban institution, the University of Cincinnati is in no position either to "give" all its incoming first-year students cutting-edge devices like the iPad, or to require students to acquire the devices themselves. We're Here, Now What? Pedagogy and the iPad « Northern Arizona University's e-Learning Center. By John J. 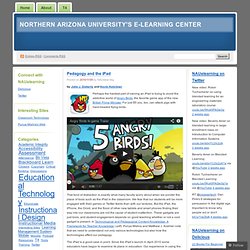 Doherty and Kevin Ketchner Perhaps the hardest part of owning an iPad is trying to avoid the addictive world of Angry Birds, the favorite game app of the new British Prime Minister. For just $5 you, too, can attack pigs with hard-headed flying birds. That kind of distraction is exactly what many faculty worry about when we ponder the place of tools such as the iPad in the classroom. We fear that our students will be more engaged with their games or Twitter feeds than with our lectures. Using iPads in Education: Resources for teachers using iPads in the classroom. 25 Ways To Use iPads In The Classroom.

In case you haven’t heard the news, we’re putting out a special mini-issue early next week. It’ll be available in the Edudemic Magazine iPad app and, best of all, FREE to subscribers! If you’re not (yet) a subscriber, it’ll be just $0.99. iPads for Education.