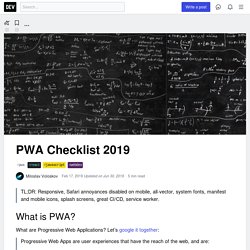 What are Progressive Web Applications? Let’s google it together: Progressive Web Apps are user experiences that have the reach of the web, and are: Reliable - Load instantly and never show the downasaur, even in uncertain network conditions. Fast - Respond quickly to user interactions with silky smooth animations and no janky scrolling.

Engaging - Feel like a natural app on the device, with an immersive user experience. Technically, PWA is a website with manifest. PWA is the only way to appear on mobile device’s home screen without being censored by the platform’s app store, completely for free. PWA Checklist 2020 (final and complete) TL;DR: pwagym.com For me, PWA meant freedom since the very beginning. 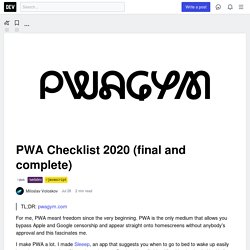 PWA is the only medium that allows you bypass Apple and Google censorship and appear straight onto homescreens without anybody's approval and this fascinates me. I make PWA a lot. I made Sleeep, an app that suggests you when to go to bed to wake up easily based on your location. Sleeep brought me a Product Hunt Golden Kitty Nomination in Health & Fitness. PWA started as merely a websites without a status bar but everyday the possibilities are growing. Making PWA always means keeping track of a large amount of small things that should be correct in order for your app to work properly. When I build PWA, I always have some sort of checklist. I created my own checklist in 2019, but after some time I realized that I don't use it. Progressive Web Apps: Bridging the gap between web and mobile apps.

By Ajay NS Unless you’ve been living under a rock, you’ve probably heard of PWAs or Progressive Web Apps. 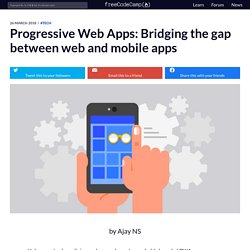 It’s a hot topic right now because its support is increasing in multiple platforms, and major companies are deciding to work on PWA versions of their web apps including Twitter, Lyft, Starbucks, NASA, and more. Recently it gained more attention, when Apple announced Service Worker and Web Manifest support for Safari. Microsoft brought PWAs to the Windows store, and Chrome has experimental PWA support for all the platforms. Okay that should be enough to convince you that they’re worth going through. Progressive Web Apps: A Crash Course. Progressive Web Apps (PWAs) try to overlap the worlds of the mobile web apps and native mobile apps by offering the best features of each to mobile users. 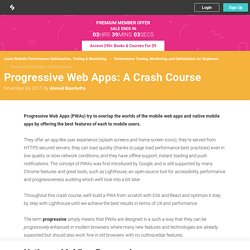 They offer an app-like user experience (splash screens and home screen icons), they’re served from HTTPS-secured servers, they can load quickly (thanks to page load performance best practices) even in low quality or slow network conditions, and they have offline support, instant loading and push notifications. The concept of PWAs was first introduced by Google, and is still supported by many Chrome features and great tools, such as Lighthouse, an open-source tool for accessibility, performance and progressiveness auditing which we’ll look into a bit later. 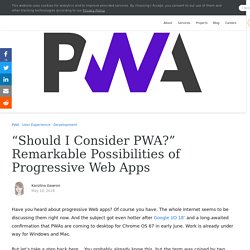 Of course you have. The whole Internet seems to be discussing them right now. And the subject got even hotter after Google I/O 18’ and a long-awaited confirmation that PWAs are coming to desktop for Chrome OS 67 in early June. Work is already under way for Windows and Mac. But let’s take a step back here… You probably already know this, but the term was coined by two Google engineers, Alex Russell and Frances Berriman, back in 2015. The popularity of PWA is peaking in 2018 (source: Google Trends) It is indeed a fascinating concept. PWA Example: Progressive Web App E-Commerce with GatsbyJS. In a rush? 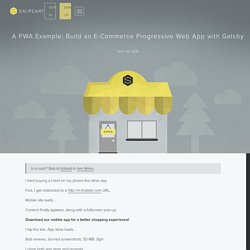 Skip to tutorial or live demo. I tried buying a t-shirt on my phone the other day. First, I get redirected to a URL. A Practical Introduction to Progressive Web Apps - Part 3. In part three of this series, we cover one of the more complex aspects of the PWA - the Service Worker. 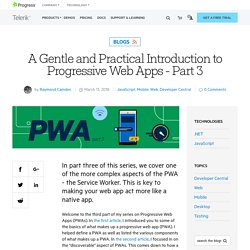 This is key to making your web app act more like a native app. Welcome to the third part of my series on Progressive Web Apps (PWAs). In the first article, I introduced you to some of the basics of what makes up a progressive web app (PWA). I helped define a PWA as well as listed the various components of what makes up a PWA. In the second article, I focused in on the "discoverable" aspect of PWAs. I hope you've enjoyed it so far because this is the part where things get serious. Enter the Service Worker. A Practical Introduction to Progressive Web Apps - Part 2. Progressive Web Apps (PWAs) are increasingly important for web developers. 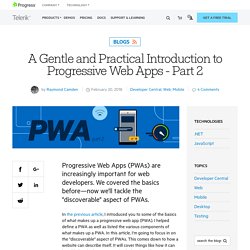 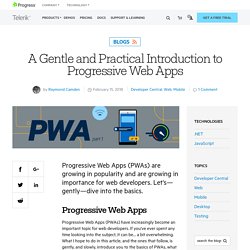 Let's—gently—dive into the basics. Choosing Mobility Options in 2018. If you are a JavaScript developer, you have never had more options for building mobile apps. 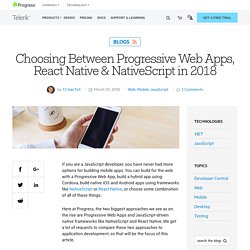 You can build for the web with a Progressive Web App, build a hybrid app using Cordova, build native iOS and Android apps using frameworks like NativeScript or React Native, or choose some combination of all of these things. Here at Progress, the two biggest approaches we see as on the rise are Progressive Web Apps and JavaScript-driven native frameworks like NativeScript and React Native. We get a lot of requests to compare these two approaches to application development, so that will be the focus of this article. TIP: If you're curious to read more about the future of JavaScript, be sure to check out our new whitepaper on the topic, The Future of JavaScript: 2018 and Beyond. We’ll start by discussing the Progressive Web App and the JavaScript-driven native approaches in detail, and move on to give some clear guidelines on when each approach makes sense. Building PWAs with Vue.js. Looking to get started developing Progressive Web Apps with Vue.js? Learn how to easily get PWAs built quickly using Vue.

If you’ve spent any time at all online or among other web developers lately, you’ve no doubt heard the acronym PWA, or Progressive Web App, bandied about. This term, originally championed by Google, labels a class of apps purpose-built for the mobile web and which offer many of the strengths of mobile apps (offline support, home screen installation) while still maintaining the broad reach that only the web can provide. PWAs have been a topic of much discussion in the web world for the past couple of years, but have been a fringe concept for much of that time due to limited support for key technologies in both Safari and Edge.

That’s set to change in 2018, however, as both browsers are set to release updates supporting the essential building blocks needed for a PWA. HNPWA. Introducing Pokedex.org: a progressive webapp for Pokémon fans — Pocket JavaScript. To work around this, I attached a single event listener to the entire <ul>, which is responsible for animating the ripple effect on individual <li>s. Browser support As it turns out, a lot of the APIs I mention above aren't perfectly supported in all browsers. Most notably, ServiceWorker is not available in Safari, iOS, IE, or Edge. (Firefox has it in nightly and will ship very soon.) This means that the offline functionality won't work in those browsers – if you refresh the page without a connection, the content won't be there anymore.

Codebusking/react-pwa-guide-kit: React.js for Progressive Web Apps that say Hello! World. GitHub - angular/mobile-toolkit: Tools for building progressive web apps with Angular.   Tools for Web Developers   Lighthouse is an open-source, automated tool for improving the quality of web pages. You can run it against any web page, public or requiring authentication. It has audits for performance, accessibility, progressive web apps, SEO and more. You can run Lighthouse in Chrome DevTools, from the command line, or as a Node module. You give Lighthouse a URL to audit, it runs a series of audits against the page, and then it generates a report on how well the page did. From there, use the failing audits as indicators on how to improve the page. You can also use Lighthouse CI to prevent regressions on your sites.

Run Lighthouse In Chrome DevTools bug_report File an issue. Progressive Web App Checklist   Progressive Web Apps (PWA) are reliable, fast, and engaging, although there are many things that can take a PWA from a baseline to exemplary experience. To help teams create the best possible experiences we've put together this checklist which breaks down all the things we think it takes to be a Baseline PWA, and how to take that a step further with an Exemplary PWA by providing a more meaningful offline experience, reaching interactive even faster and taking care of many more important details. Baseline Progressive Web App Checklist The Lighthouse tool is able to automatically verify many items on the this list and may prove helpful in easily testing sites.

Progressive Web Apps: Escaping Tabs Without Losing Our Soul. It happens on the web from time to time that powerful technologies come to exist without the benefit of marketing departments or slick packaging. They linger and grow at the peripheries, becoming old-hat to a tiny group while remaining nearly invisible to everyone else. Until someone names them. This may be the inevitable consequence of a standards-based process and unsynchronized browser releases. We couldn’t keep a new feature secret if we wanted to, but that doesn’t mean anyone will hear about it.

XMLHTTPRequest was available broadly since IE 5 and in Gecko-based browsers from as early as 2000. This eventual adding-up of new technologies changes how we build and deliver experiences. Major evolutions of the web must be compatible with it culturally as well as technically. Progressive web apps - App Center. Progressive Web Apps