Economy and Indutry to April 2014

When the French clock off at 6pm, they really mean it. Relaxing in a French cafe, untroubled by work emails. 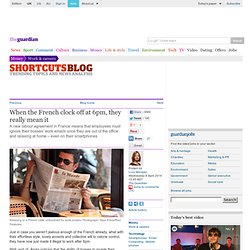 Photograph: Sipa Press/Rex Features Just in case you weren't jealous enough of the French already, what with their effortless style, lovely accents and collective will to calorie control, they have now just made it illegal to work after 6pm. Well, sort of. Après noticing that the ability of bosses to invade their employees' home lives via smartphone at any heure of the day or night was enabling real work hours to extend further and further beyond the 35-hour week the country famously introduced in 1999, workers' unions have been fighting back.

Now employers' federations and unions have signed a new, legally binding labour agreement that will require staff to switch off their phones after 6pm. That's right. C'est all right pour some, quoi? Swedish city embarks on 6-hour workday experiment. The measure comes as a new labour agreement in France orders employees to avoid checking their professional emails and phones after work while employers are legally obliged to ensure workers come under no pressure to keep up-to-speed out of working hours. 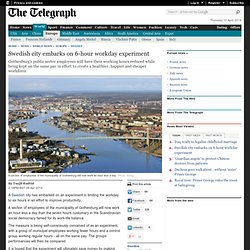 Anna Coote, Head of Social Policy at the New Economics Foundation, a UK-based think tank, welcomed the proposals. “Shorter working hours create a more committed and stable workforce,” Ms Coote told The Telegraph. “There are indications you can make savings by reducing working hours,” she added, citing an experiment in Utah where public sector workers were given a three-day weekend. According to OECD data, there is a correlation between shorter working hours and greater productivity. The Greeks are the hardest working members of the OECD, putting in more than 2,000 hours a year compared with the Germans’ 1,400, but their workers are 70 per cent less productive than their Teutonic counterparts. Out of hours working banned by German labour ministry. Kickstarter Hits $1 Billion.

The robots are coming. Will they bring wealth or a divided society? Whether it's our humdrum reliance on supermarket self-service tills, Siri on our iPhones, the emergence of the drone as a weapon of choice or the impending arrival of the driverless car, intelligent machines are woven into our lives as never before. 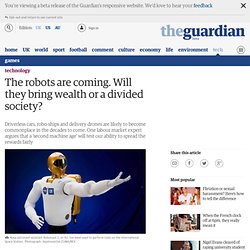 It's increasingly common, a cliche even, for us to read about the inexorable rise of the robot as the fundamental shift in advanced economies that will transform the nature of work and opportunity within society. The robot is supposedly the spectre threatening the economic security not just of the working poor but also the middle class across mature societies. "Be afraid" is the message: the march of the machine is eating into our jobs, pay rises and children's prospects. And, according to many experts, we haven't seen anything yet. This is because the power of intelligent machines is growing as their cost collapses.

As yet, this techno-hype isn't matched by much hard evidence. The lag, however, can be a long one. Some of this is contested. The Mint countries: Next economic giants? In 2001 the world began talking about the Bric countries - Brazil, Russia, India and China - as potential powerhouses of the world economy. 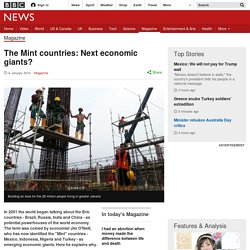 The term was coined by economist Jim O'Neill, who has now identified the "Mint" countries - Mexico, Indonesia, Nigeria and Turkey - as emerging economic giants. Here he explains why. So what is it about the so-called Mint countries that makes them so special? Why these four countries? A friend who has followed the Bric story noted sardonically that they are probably "fresher" than the Brics. This is the envy of many developed countries but also two of the Bric countries, China and Russia. Something else three of them share, which Mexican Foreign Minister Jose Antonio Meade Kuribrena pointed out to me, is that they all have geographical positions that should be an advantage as patterns of world trade change.

For example, Mexico is next door to the US, but also Latin America. And as we all know, Turkey is in both the West and East. He's right.