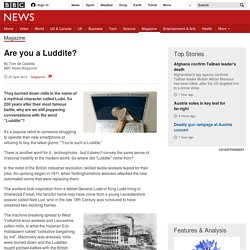 So 200 years after their most famous battle, why are we still peppering conversations with the word "Luddite"? It's a popular retort to someone struggling to operate their new smartphone or refusing to buy the latest gizmo: "You're such a Luddite. " There is another word for it - technophobe - but it doesn't convey the same sense of irrational hostility to the modern world. So where did "Luddite" come from? In the midst of the British industrial revolution, skilled textile workers feared for their jobs. The workers took inspiration from a fabled General Ludd or King Ludd living in Sherwood Forest. Fascinating early photographs of London. 19c housing health. ECC-Carriages. Street Life in London. Page contents > John Thomson | PDF version | Images | Historypin. 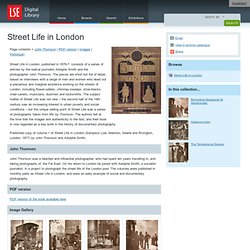 Famous Frosts and Frost Fairs in Great Britain:... Lady Hawarden's 19th century prints go on sale. Photos dating back to 1860s were taken by Lady Clementina Hawarden of her daughters She dressed her three eldest girls - Isabella Grace, Clementina, and Florence Elizabeth - in costume tableau at their London home, which acted as studio They were shot - in romantic and sensual poses - in pairs, or, if alone, with a mirror or with their back to the cameraLewis Carroll was a big fan of Lady Hawarden's work By Nick Enoch Published: 13:56 GMT, 6 February 2013 | Updated: 22:07 GMT, 6 February 2013. 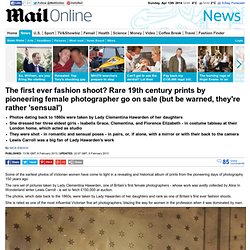 Social pioneer's withering assessment deemed too offensive for her neighbours is published 100 years later. Graduate Maud Davies began a sociological study of her village in 1905Branded neighbours in Corsley, Wiltshire, 'rather rough' and 'a dirty lot'Villagers petitioned parish council to block paper from being publishedShe went on to expose 'white slave trade' in British prostitutes to the U.S.Ms Davies was found dead on a London Underground line at 37 By Kerry Mcdermott Published: 13:54 GMT, 13 March 2013 | Updated: 11:30 GMT, 14 March 2013. 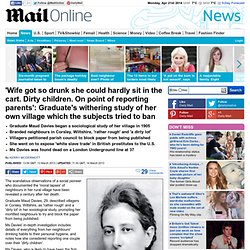 Life of Ninteenth-Century Workers. Mugshots of Victorian thieves reveal an era of poverty when posing for a photograph was a special occasion. Fascinating police images were taken in Newcastle in the 1870sThey mostly feature petty thieves who stole everything from rabbits to champagneMugshots are part of Tyne and Wear Archives and Museums collection, which is being put online By Graham Smith Published: 10:15 GMT, 10 July 2012 | Updated: 14:25 GMT, 10 July 2012 Staring straight ahead, many with their right arm casually balanced on the back of a chair, these Victorian adults look lost deep in thought. 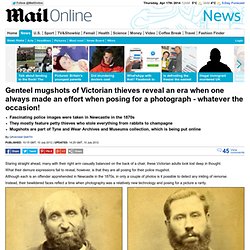 What their demure expressions fail to reveal, however, is that they are all posing for their police mugshot. Although each is an offender apprehended in Newcastle in the 1870s, in only a couple of photos is it possible to detect any inkling of remorse. Instead, their bewildered faces reflect a time when photography was a relatively new technology and posing for a picture a rarity. Criminal records: John Grieveson (left), 21, was sentenced to four months in Newcastle Gaol for stealing pigeons. Newly-published tax records of historical figures show Nelson payed just £3, Disraeli just £10 and King George II gave £47. 400 years of tax records released today show the rich, famous and royalty of previous centuries also paid paltry amounts to the TreasuryNelson, Conan Doyle, Disraeli and King George III handed over very small amounts of land tax despite owning plush homes, mansions and palaces By Martin Robinson Published: 10:29 GMT, 28 June 2012 | Updated: 12:08 GMT, 28 June 2012 Jimmy Carr can heave a huge sigh of relief - it has been revealed he is not the only celebrity to avoid handing over large amounts of cash to the tax man. 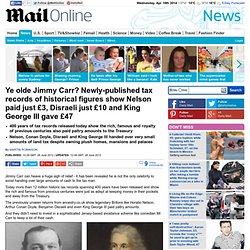 Today more than 12 million historic tax records spanning 400 years have been released and show the rich and famous from previous centuries were just as adept at keeping money in their pockets and away from the Treasury. The previously unseen returns from ancestry.co.uk show legendary Britons like Horatio Nelson, Arthur Conan Doyle, Benjamin Disraeli and even King George III paid paltry amounts. 1842 Royal Commission Reports - Raleys - Maps, Poems and Searchable Databases for Mining in the UK. The early nineteenth century saw a dramatic rise of activity in the mining of the country's coal fields. 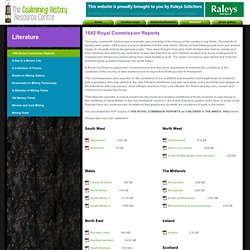 Thousands of people were drawn off the land and from factories into the coal mines. Stories of how these people lived and worked began to circulate among the general public. They were thought of as wild, hard drinkers who had no morals and were Godless and without any education. It was said that women and children worked long hours underground in cramped and dangerous places doing hard, back-breaking work. 1842_Yorkshir__1. 1842 Children's Employment Commission First Report of the Commissioners (Mines): From Weaver to Web. © Irish University Press Nature of employment in coal mines. 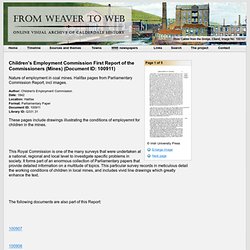 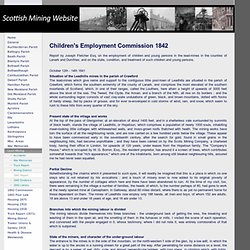 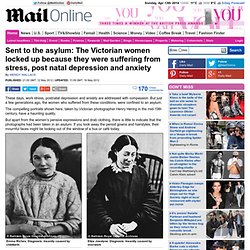 But just a few generations ago, the women who suffered from these conditions, were confined to an asylum. The compelling portraits shown here, taken by Victorian photographer Henry Hering in the mid-19th century, have a haunting quality. But apart from the women’s pensive expressions and drab clothing, there is little to indicate that the photographs had been taken in an asylum. Emma Riches. Eliza Josolyne. History - Beneath the Surface: A Country of Two Nations. The History of Bristol. Bristol has a long and interesting history dating back to Anglo-Saxon times, when a settlement grew up between the Rivers Avon and Frome, known as Brigstowe (a place of settlement by the bridge). The settlement grew as trading with Ireland and the ports of South Wales developed. After the Norman Conquest of 1066 a castle was built on what is now known as Castle Park. Bristol has a rich maritime heritage.

By the 14th century the city was trading with several countries including Spain, Portugal and Iceland. Ships also left Bristol to found new colonies in the New World. In the mid 18th century Bristol became England's second biggest city. In the late 18th century Clifton village grew as merchants relocated and built houses further away from the city docks. The city continued to expand and much of the original architecture remains today including the area around King Street, Queen Square, Christmas Steps and St Michael's Hill, as well as Clifton village. Top 10 Creepy Aspects of Victorian Life. Creepy My birthday is on Monday so today I am in a mood of recollecting that life is short and we should live it to the full. In honor of the “life is short” bit, I have come up with a slightly depressing list (don’t worry – I will post a happier one tomorrow). The Victorians were a special breed and this list looks at 10 aspects of life from the Victorian era that are creepy.

Note that the focus is entirely on Victorian England. Be sure to post any we have missed in the comments. The Victorian upper class (and later middle class) had no televisions to entertain them, so they entertained themselves. Poorhouses were government-run facilities where the poor, infirm, or mentally ill could live. History of Leeds - Poverty & Riches. During the 19th Century Leeds changed from a small town to a large manufacturing city, covered by a pall of smoke and fumes from the factory chimneys. Between 1790 and 1840 there was a huge increase in numbers of the 'lower orders', who were now called the working classes. This was partly a result of the introduction of the factory system - factories like those of Benjamin Gott and John Marshall needed a large workforce. Also, the town was growing in prosperity, and attracting manufacturers, tradesmen, and shopkeepers, as well as those working in banking and property development.

All this commercial activity meant that people came to Leeds seeking work. There were not enough houses to accommodate all these people. In between the merchant elite and the lower orders of the 18th Century there had always been the craftsmen, shopkeepers and cloth workers who made up the middle classes. The Children of London's Spitalfields Slums in Photographs 100 Years Ago. Cholera in Wales in the 19th century. Wales (NLW Journals) Contents Cholera in Wales G Penrhyn Jones, National Library of Wales journal Vol X/3 Summer 1958. Extracted onto the pages of GENUKI with the kind permission of the National Library of Wales This is a complete extract of this article [Gareth Hicks 2002] The Union Workhouse.

These pages were started in October 1998 when there was no general information on workhouses on the Information Super-highway, as we used to call the Internet. This site begins with a simple description of workhouses; what they were & what life was like in them. Further on, you will find information on several workhouses with links to important workhouse resources. To go straight to these, please click here. The site also contains a reading list on workhouses & a poem on Newmarket Union. Most people have heard of the boy who asked for more in CHARLES DICKENS' novel OLIVER TWIST.Oliver was a poor & miserable child who lived in a workhouse, and like all workhouse children, Oliver was permanently hungry owing to the totally inadequate meals. If you were poverty-stricken, or an unwanted orphan, or an impoverished widow, if you were too old to work, or if you were on the tramp, or you were sick or deranged, you could end up in the dreaded union workhouse.

Rogues' gallery of Fagin's children: Mugshots of Victorian criminals shows thieves as young as 11 who were jailed for stealing clothes, cash and metal. By Chris Parsons and Amy Oliver for The Mail on Sunday Published: 02:25 GMT, 27 June 2012 | Updated: 12:41 GMT, 27 June 2012. Victorian Social History: An Overview.