Ordinary Streets. Whatever happened to the reinvention of the UK high street? Again and again and again over recent years, the media has numbered the great British high street among those species that are teetering on the brink of extinction. 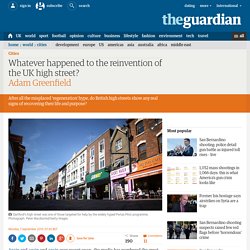 You surely know the words to this song: the by-now conventional narrative has it that, between the seductions of suburban big-box stores, the convenience of online commerce and the sheer difficulties of getting around, the local retail district finds itself in a death spiral. Depending on where you happen to be standing, this can be hard to see from within London, where commercial strips from Harringay to Camberwell seem to be holding their own.

Tesco teams up with FareShare charity to reduce food waste. Tesco is starting a scheme which could hand tens of thousands of tonnes of surplus food from its stores to local charities as supermarkets come under rising pressure to reduce waste. 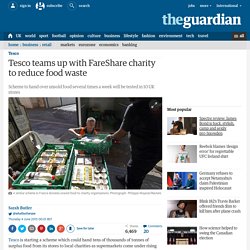 The UK’s biggest supermarket admits that it wasted 55,400 tonnes of food from its stores last year, about 30,000 tonnes of which was edible. Some food left over at its warehouses is already distributed to charities, but Tesco currently sends the vast majority of food waste from shops for use as animal feed or to be loaded into anaerobic digestion energy plants. A new partnership with food redistribution charity FareShare will link Tesco store managers with local charities to hand over unwanted food several times a week. The scheme has already been tested at over 100 stores in Ireland and will go into an initial 10 stores in the UK including outlets in Glasgow, Belfast, Merseyside and London. The Food Assembly. Food waste cafes and urban orchards: five ways people are building a new economy.

A new economy is coming into play. 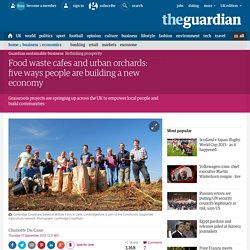 No longer wielded as a weapon to legitimise austerity, this is an economy where the community and the environment, not the corporate shareholder, benefits. Beneath its ruthless, business-as-usual veneer, Britain hosts a colourful array of grassroots enterprises. Some of these are sparked into action by artists or dynamic working groups, many are crowdfunded, and all of them foster more friendly relations between people. In the Food Assembly model, for example, where customers order from local producers online, a farmer typically gets an 80% return on their produce as opposed to 7% from national supermarkets. Essence_of_permaculture.pdf. The network Permaculture is also a network of individuals and groups spreading permaculture design solutions in both rich and poor countries on all continents. 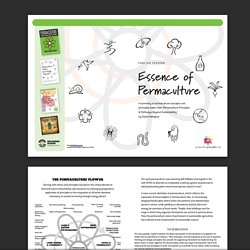 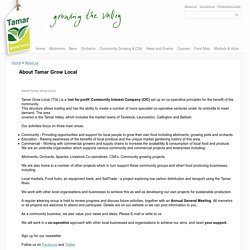 Homesteading Food Web. Raising chickens sustainably. We’ve already mentioned how complex and confusing the ideas behind Food Web can be. 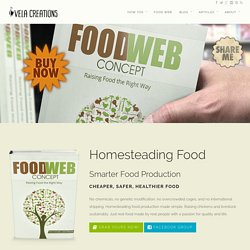 With so many overlapping cycles and animal needs, it’s hard to keep things straight. So the idea of these next few chapters is to break down the actual structure of Food Web and the terms we use to describe it. Whitepaper: Agricultural Systems + Data Outlook 2Q14. All of London's start-up accelerators and incubators. This zero-waste grocery store has no packaging, plastic or big-name brands. Australian researchers are hoping to change the lives of millions of people with spinal cord injuries with a 3cm long net of electrodes and wires. 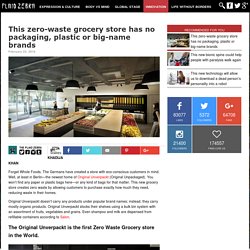 This ‘bionic spine’ would allow paralyzed patients to control bionic limbs with the use of subconscious thought. The spine communicates with a transmitter on the patient’s shoulder, which then communicates with an external mobility assist device, such as an exoskeleton. One of the major benefits of this innovative technology is that it isn’t very invasive, and doesn’t require any open brain surgery. The device is implanted using a small catheter; it is fed through blood vessels into the brain until it reaches the top of the motor cortex, which is where nerve impulses initiate involuntary muscle movement. Electrodes on the bionic spine read these electrical impulses and transmit the information to bionic limbs, telling them to move. Sky Greens – About Sky Greens. Sky Greens is world’s first low carbon, hydraulic driven vertical farm. 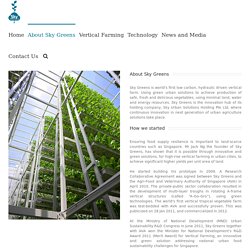 Using green urban solutions to achieve production of safe, fresh and delicious vegetables, using minimal land, water and energy resources. Sky Greens is the innovation hub of its holding company, Sky Urban Solutions Holding Pte Ltd, where continuous innovation in next generation of urban agriculture solutions take place. Ensuring food supply resilience is important to land-scarce countries such as Singapore. Mr Jack Ng the founder of Sky Greens, has shown that it is possible through innovative and green solutions, for high-rise vertical farming in urban cities, to achieve significant higher yields per unit area of land. He started building his prototype in 2009. Home - FoodCycle. Welcome to Company Shop.

The Community Shop – fighting food waste and food poverty. The UK’s first full-scale social supermarket has opened in West Norwood – selling low-cost, high-quality surplus food to hundreds of people on income support while helping them back into work. 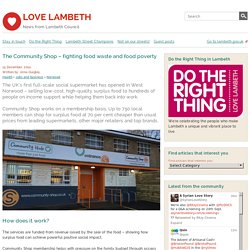 Community Shop works on a membership basis. Up to 750 local members can shop for surplus food at 70 per cent cheaper than usual prices from leading supermarkets, other major retailers and top brands. Community Shop opens: ‘it’s light at the end of the tunnel’ With rump steaks for 50p, 30 eggs for £2.10 and products from rival stores sitting alongside each other on the shelves, it is obvious that the Community Shop, which officially opened on Monday, is not the average supermarket. 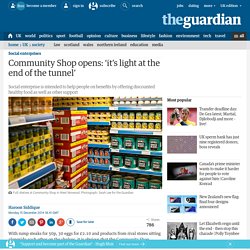 The shop in West Norwood, south London, is a social enterprise aimed at helping people on benefits by providing them with heavily discounted healthy food deemed surplus by supermarkets, and by giving them the support they need to change their lives, including getting back into employment. “It’s exactly what’s needed,” said one customer, Sherene Pryce, 34. “It’s a squeeze usually, you have to be shopping around, going to loads of different supermarkets, trying to get the best deals. Convenience foods are so much cheaper but we want to give our kids fresh, healthy food.”

Tesco teams up with FareShare charity to reduce food waste. Daily Table – Our Story. Daily Table is a not-for-profit retail store that offers our community a variety of tasty, convenient and affordable foods that will help you feel and be your best; food that will keep you moving forward, not hold you back. We provide both “grab-n-go” ready to eat meals, and a selection of produce, bread, dairy and grocery items all at prices that will put a smile on your face, and designed to fit within every budget.

Many of our items are prepared fresh daily in our own kitchen onsite. We offer an upbeat, clean and friendly retail store environment that is open to everyone in the community. We can offer these daily values by working with a large network of growers, supermarkets, manufacturers, and other suppliers who donate their excess, healthy food to us, or provide us with special buying opportunities. Boston grocery store tackles food waste and high produce prices in one fell swoop. In an attempt to kill two birds with one stone fruit, a former grocery store chain president has opened a new, nonprofit store in Boston, Massachusetts that hopes to tackle both food waste and the unaffordability of healthy food among the working poor.

Daily Table, a not-for-profit grocery store, opened Thursday in Dorchester, a working-class neighborhood in Boston, featuring cheap, yet healthy foods that traditional grocers are unwilling to sell because of arbitrary ‘use by’ dates. 5 Apps For Finding Local, Seasonal Produce. Life and Health. Support for a 'Tesco tax' gains pace in fight to save high streets. 20 local councils already support the planLevy would follow model in Scotland of taxing supermarkets an extra 9.3%Supermarkets claim the tax would just push up pricesCouncils would have to spend money raised on improving the local economy By Neil Craven, Financial Mail on Sunday Published: 21:26 GMT, 2 August 2014 | Updated: 11:02 GMT, 3 August 2014. Save our communities from large supermarkets. Across Britain, the high street is in decline.

The effects ripple through our communities. A major factor in this decline is the relentless rise of large supermarkets. Why is it that the disappearing high-street shops tend to be those that were previously thought of as essential? Media - News releases - Record breaking food donations as Britain digs deeper than ever (7 December, 2014) FareShare-brochure-digital-website. Every (successful) company is a service company. Register now for the O’Reilly Design Conference, which will explore the evolving role of design in business and society along with the tools designers need to shape the next generation of products and services. Loosely defined, service is the relationship between consumer and company. Wasting Food? It'll Cost You  First ever Food Surplus Summit taking place today. Food industry explores how surplus food can feed people and change lives. UK supermarkets face mounting pressure to cut food waste. British supermarkets are coming under increasing pressure to go further than rival Tesco to show shoppers what progress they are making in reducing food waste, as the government insists that such action should remain voluntary.

Supermarkets: Is it the End of Empire? News that the ‘Big Four’ major British supermarkets are experiencing massive losses has become so ubiquitous in recent months it hardly seems newsworthy anymore. My edible classroom gives deprived New York kids a reason to attend school. Stephen Ritz is a teacher in New York’s deprived South Bronx district where he began a pioneering project to farm plants and vegetables indoors at Discovery High School. PlantLab: Urban Farms 40 Times More Productive than Open Fields. A Dutch firm on the cutting edge of indoor agriculture estimates that producing food for the entire world could take place in a space far smaller than the area occupied by Holland, using just 10% of the water needed by traditional farms.