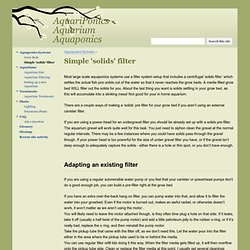 Lemnoideae. Duckweeds, or water lens, are flowering aquatic plants which float on or just beneath the surface of still or slow-moving bodies of fresh water and wetlands. 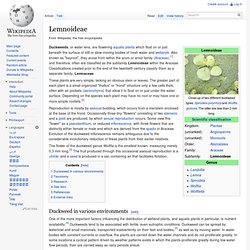 Also known as "bayroot", they arose from within the arum or aroid family (Araceae),[1] and therefore, often are classified as the subfamily Lemnoideae within the Araceae. Classifications created prior to the end of the twentieth century classify them as a separate family, Lemnaceae. These plants are very simple, lacking an obvious stem or leaves. The greater part of each plant is a small organized "thallus" or "frond" structure only a few cells thick, often with air pockets (aerenchyma) that allow it to float on or just under the water surface. Depending on the species each plant may have no root or may have one or more simple rootlets.[2] Reproduction is mostly by asexual budding, which occurs from a meristem enclosed at the base of the frond. Duckweed in various environments[edit] Taxonomy[edit] Research[edit] In July 2008 the U.S. Facts About Abalone. Facts About Abalone Classification In the animal kingdom, abalone belong to the phylum Mollusca, a group which includes clams, scallops, sea slugs, octopuses and squid. 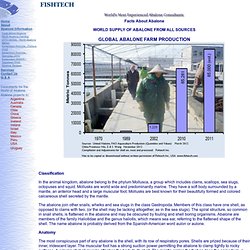 Mollusks are world wide and predominantly marine. They have a soft body surrounded by a mantle, an anterior head and a large muscular foot. Mollusks are best known for their beautifully formed and colored calcareous shell secreted by the mantle. The abalone join other snails, whelks and sea slugs in the class Gastropoda. Anatomy The most conspicuous part of any abalone is the shell, with its row of respiratory pores. Kunyit. Turmeric or Kunyit in Malay is a rhizomatous herbaceous perennial plant of the ginger family. 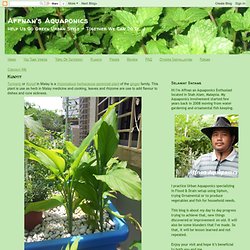 This plant is use as herb in Malay medicine and cooking, leaves and rhizome are use to add flavour to dishes and cure sickness. I am trying out this plants, normally it doesn't grow in water logged soil. Maybe due to my pump OFF condition at night make this herb grow able. These Turmeric are on my home kit, in my main set up I dedicate I growbed for it. So far the result of this backyard test is encouraging. Close up above showing young shots emerging from the bed, with this its an indication that its multiplying and the rhizome survive the growbed condition. More shoots emerging from growbed. Above Turmeric in my main setup growbed, these about 1 months after replanting. There are few problem I am experiencing, heat damage to the leaves and Bugs. How to Build A Water Garden or Fish Pond. How to Build a Natural Swimming Pool. How to Build Your Own Desk Finding the perfect desk with just the right amount of work space can be a hassle and a financial dr... 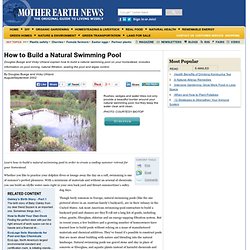 Learn how to build a natural swimming pool in order to create a cooling summer retreat for your homestead. Whether you like to practice your dolphin dives or lounge away the day on a raft, swimming is one of summer's perfect pleasures. With a minimum of materials and without an arsenal of chemicals, you can build an idyllic water oasis right in your own back yard and thwart summertime's sultry dog days. Though fairly common in Europe, natural swimming pools (like the one pictured above in an Austrian family's backyard), are in their infancy in the United States. Affnan's Aquaponics - Tilapia Harvest 31st Dec 2010. Aquaculture Water Use, the USGS Water Science School. As the label in the grocery store says, "Farm Raised Tilapia Fillets" are for sale. 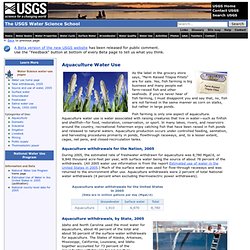 Yes, fish farming is big business and many people eat farm-raised fish and other seafoods. If you've never hear of fish farming, I must disappoint you and say that, no, fish are not farmed in the same manner as corn on stalks, but rather in large ponds. Fish farming is only one aspect of aquaculture. Aquaculture water use is water associated with raising creatures that live in water—such as finfish and shellfish—for food, restoration, conservation, or sport. In many lakes, rivers, and reservoirs around the country, recreational fishermen enjoy catching fish that have been raised in fish ponds and released to natural waters. Aquaculture withdrawals for the Nation, 2005 During 2005, the estimated rate of freshwater withdrawn for aquaculture was 8,780 Mgal/d, or 9,840 thousand acre-feet per year, with surface water being the source of about 78 percent of the withdrawals. Aquaponic Worms FAQ. Q- How much time will it take for me to maintain my aquaponics system? 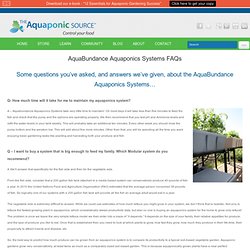 A – Aquabundance Aquaponics Systems take very little time to maintain! On most days it will take less than five minutes to feed the fish and check that the pump and the siphons are operating properly.