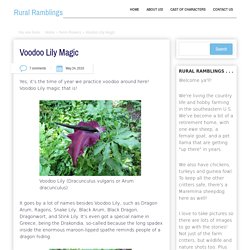 Voodoo Lily magic that is! Voodoo Lily (Dracunculus vulgaris or Arum dracunculus) It goes by a lot of names besides Voodoo Lily, such as Dragon Arum, Ragons, Snake Lily, Black Arum, Black Dragon, Dragonwort, and Stink Lily. It’s even got a special name in Greece, being the Drakondia, so-called because the long spadex inside the enormous maroon-lipped spathe reminds people of a dragon hiding. A dragon peeking out? If you’re not “into” plants, the spathe is the big petal-like part that most people would probably consider the “flower”. Besides the large purple spathe and spadix, there is one other notable thing about this plant. Bugs on the stinky Voodoo Lily Marvelous, a weird looking plant attracting flies.

Anyway, this plant is native to the Balkans, extending as far as Greece, Crete and the Aegean Islands, and also to the south-western parts of Anatolia. Well, I did NOT plant it. Got that? A little voodoo magic seen from the top. Australia's most poisonous plants. By Sylvia Varnham O'Regan | July 4, 2012 They may seem innocuous, but some plants can be deadly. 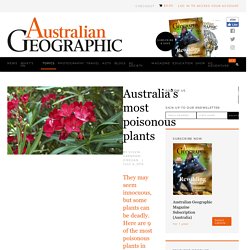 Here are 9 of the most poisonous plants in Australia. ON THE FACE of it, plants may seem innocuous, but some of them can be surprisingly lethal to humans who may come across their path. Because plants cannot run away from their predators, they develop toxicity as a defence. Often shoots are very high in concentration of poison and can be more harmful if consumed. About 1000 species of plants in Australia are known to be toxic to animals and humans and plenty more cause skin and eye irritation, rashes or discomfort. Dr Marco Duretto, Manager of Plant Diversity at the Royal Botanic Gardens and Domain Trust in Sydney, says if you’re in the bush or just rummaging around the garden “do not put things in your mouth unless you know what they are, because there are a lot of toxic plants out there”. “A lot of literature refers to plants poisonous to animals,” says Jeff. 1. (Castanospermum australe) 2.

Most TOXIC Plants on Earth. Hellebore Toxicity: What Happens If Your Dog Eats Hellebore In The Garden. Poisonous Plants. Toxic and Non-Toxic Plants List ASPCA Animal Poison Control Center Phone Number: (888) 426-4435 This list contains plants that have been reported as having systemic effects on animals and/or intense effects on the gastrointestinal tract. 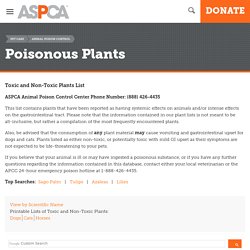 Please note that the information contained in our plant lists is not meant to be all-inclusive, but rather a compilation of the most frequently encountered plants. Also, be advised that the consumption of any plant material may cause vomiting and gastrointestinal upset for dogs and cats. Plants listed as either non-toxic, or potentially toxic with mild GI upset as their symptoms are not expected to be life-threatening to your pets. If you believe that your animal is ill or may have ingested a poisonous substance, or if you have any further questions regarding the information contained in this database, contact either your local veterinarian or the APCC 24-hour emergency poison hotline at 1-888-426-4435. Top Searches: Sago Palm | Tulips | Azaleas | Lilies. Pictures of Poisonous Plants for Identification.

30 Of Southern California's Fascinating But Toxic Plants and Animals — Province. Tarantulas: They are big and hairy and therefore scary, right? 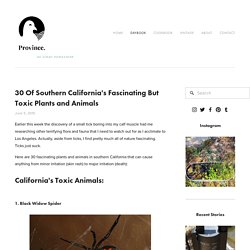 Nah, as KQED reports, they are "gentle giants". Their bite is kind of like a bee sting if provoked, but more often than not they just mind their own business. On the other hand, where there are tarantulas there are tarantula hawks. These wasps aren't out for your blood, they specifically prey on tarantulas. Brown Recluse Spiders: Let's just shut down this myth once and for all, shall we? Jellyfish: Though jellyfish populations, like the large black jellyfish, are on the rise in California waters, our local species are not serious enough to warrant listing on the toxic 30.

Just because humans may perceive a plant or an animal as frightening, doesn't mean it must be exterminated. Accept that humans don't have more right to exist than other creatures. Witness the natural world with curiosity and compassion Ask about the unknown Relocate rather than exterminate. Sweet Pea Toxicity: Are Sweet Pea Blossoms Or Pods Edible. While not all varieties smell so sweet, there are plenty of sweet smelling sweet pea cultivars. 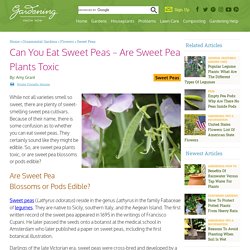 Because of their name, there is some confusion as to whether you can eat sweet peas. They certainly sound like they might be edible. So, are sweet pea plants toxic, or are sweet pea blossoms or pods edible? Are Sweet Pea Blossoms or Pods Edible? Sweet peas (Lathyrus odoratus) reside in the genus Lathyrus in the family Fabaceae of legumes. Darlings of the late Victorian era, sweet peas were cross bred and developed by a Scottish nurseryman by the name of Henry Eckford. Sow seeds in the early spring in the northern regions of the States and in the fall for southern areas.