ICC Champions Trophy 2017 Begins! Ah, summer: the sound of leather on willow, and the spectacle of cricket ... cricket! 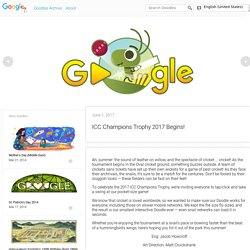 As the tournament begins in the Oval cricket ground, something buzzes outside. A team of crickets sans tickets have set up their own wickets for a game of pest cricket! As they face their archrivals, the snails, it’s sure to be a match for the centuries. So Let Us Melt — The Chinese Room. Tech Insider - This VR app lets you walk on Mars. Designing games that change perceptions, opinions and even players’ real-life actions. In 1904, Lizzie Magie patented “The Landlord’s Game,” a board game about property ownership, with the specific goal of teaching players about how a system of land grabbing impoverishes tenants and enriches property owners. 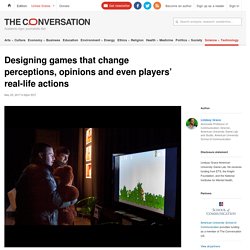 The game, which went on to become the mass-market classic “Monopoly,” was the first widely recognized example of what is today called “persuasive play.” Games offer a unique opportunity to persuade their audiences, because players are not simply listening, reading or interpreting the game’s message – they are subscribing to it. To play a game, players must accept its rules and then operate within the designed experience. As a result, games can change our perceptions, and ultimately our actions.

In American University’s Game Lab and Studio, which I direct, we’re creating a wide range of persuasive games to test various strategies of persuasion and to gauge players’ responses. And we’re expanding the realm beyond education and health. Game play involves action. Pause & Andrea Play: Little Big Planet - Episode 1. Media Molecule - Creators of LittleBigPlanet and Tearaway. How Myst Became One of the Best-Selling PC Games of All Time. Trying to install and activate second-hand game.

How to Play PC Games That Require SafeDisc or SecuROM DRM on Windows 10, 8.1, 8, 7, and Vista. Microsoft made headlines when it stripped support for SafeDisc and SecuROM DRM from Windows 10 Recent security updates to Windows Vista, 7, 8, and 8.1 have also removed support for these DRM schemes from older versions of Windows. 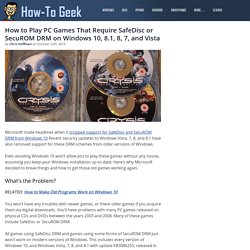 Even avoiding Windows 10 won’t allow you to play these games without any hassle, assuming you keep your Windows installation up-to-date. Here’s why Microsoft decided to break things and how to get those old games working again. What’s the Problem? You won’t have any troubles with newer games, or these older games if you acquire them via digital downloads. Five reasons why Steam will destroy the PC games industry - Gamesbrief. In the feedback for How to Publish a Game, one element stood out. 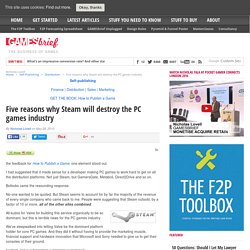 I had suggested that it made sense for a developer making PC games to work hard to get on all the distribution platforms. Not just Steam, but GamersGate, Metaboli, Direct2Drive and so on. Bollocks came the resounding response. 2K Explains How to Redeem Remastered Copies of Bioshock. Bioshock: The Collection [official site] is out next week, and as such you’ll be able to play the first two Bioshock games and all of the single-player DLC in renewed detail. 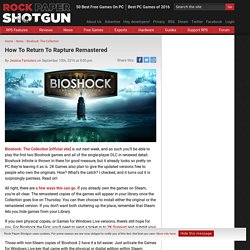 Bioshock Infinite is thrown in there for good measure, but it already looks so pretty on PC they’re leaving it as is. 2K Games also plan to give the updated versions free to people who own the originals. How? Steam On Windows 10 Will Get 'Progressively Worse': Gears of War Developer - Slashdot. Microsoft's Universal Windows Platform, or UWP, approach isn't sitting well with many game developers. 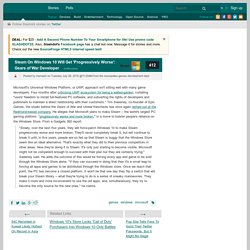 Four months after criticising UWP ecosystem for being a walled-garden, curtailing "users' freedom to install full-featured PC software, and subverting the rights of developers and publishers to maintain a direct relationship with their customers," Tim Sweeney, co-founder of Epic Games, the studio behind the Gears of War and Unreal franchises has once again lashed out at the Redmond-based company. He alleges that Microsoft plans to make Steam -- the world's largest PC gaming platform, "progressively worse and more broken.

" in a move to bolster people's reliance on the Windows Store. How Can I Play My Old PC Games on a Modern Computer? Campo Santo - Firewatch. Zenge on the App Store. NationStates - Walkthrough, Tips, Review. We've been in charge of running a country during a national crisis in Pandemic: American Swine Flu. 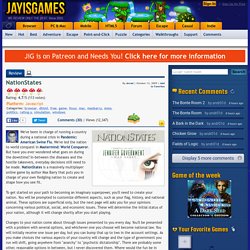 We've led the nation to world conquest in Mastermind: World Conqueror. But have you ever wondered what goes on during the downtime? In-between the diseases and the hostile takeovers, everyday decisions still need to be made. NationStates is a massively multiplayer online game by author Max Barry that puts you in charge of your own fledgling nation to create and shape how you see fit. To get started on your path to becoming an imaginary superpower, you'll need to create your nation. Changes to your nation come about through issues presented to you every day. Bumpy Road. The Sensational December Machine. Simogo. LittleBigPlanet.

Playdead - Limbo. “The game is a masterpiece.” 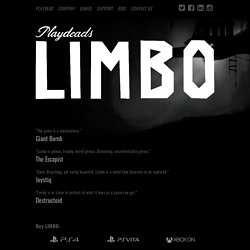 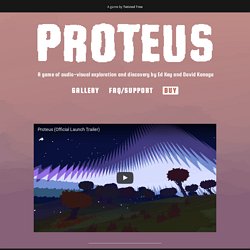 (Check these sites for periodic discounts) Proteus is available on PlayStation 3 and PlayStation Vita, in association with Curve Studios. For more details, click here. The Unfinished Swan. Thomas Was Alone. Super Monsters Ate My Condo — PikPok. Incoboto. Gone Home: A Story Exploration Video Game. Simogo. DEVICE 6. A surreal thriller in which the written word is your map DEVICE 6 plays with the conventions of games and literature, entwines story with geography and blends puzzle and novella, to draw players into an intriguing mystery of technology and neuroscience. Anna wakes up in a castle on a remote island, with little recollection of how she got there. All she remembers is an unusually unpleasant doll… Why are there two identical castles on the island? Who is the mysterious man in the bowler hat? Read, listen and peek into three-dimensional photographs to solve the bizarre mysteries of DEVICE 6. iPhone, iPod touch, iPad October 17 2 2014.

Brothers - A Tale of Two Sons - Starbreeze. Tearaway Unfolded - From the creators of LittleBigPlanet™  Year Walk iOS. In the old days man tried to catch a glimpse of the future in the strangest of ways. 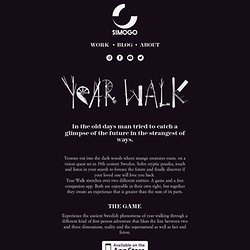 Venture out into the dark woods where strange creatures roam, on a vision quest set in 19th century Sweden. Solve cryptic puzzles, touch and listen in your search to foresee the future and finally discover if your loved one will love you back. Year Walk stretches over two different entities: A game and a free companion app. Both are enjoyable in their own right, but together they create an experience that is greater than the sum of its parts. Experience the ancient Swedish phenomena of year walking through a different kind of first person adventure that blurs the line between two and three dimensions, reality and the supernatural as well as fact and ficton. iPhone, iPod touch, iPad February 21 2013. The Stanley Parable. Papers, Please.

Lumino City. The Sailor’s Dream. Inside every knickknack left behind is a treasure trove of memories and stories filled with joys and sorrows A peaceful narrative experience, in which the only objective is to satisfy your curiosity. Explore an ocean dream world, in which time passes even when you are not there, visit forgotten islands and piece together memories – some even existing beyond the screen of your device. iPhone, iPod touch, iPad November 6 2014 Soundtrack by Jonathan Eng, featuring Stephanie Hladowski, is available on iTunes, Spotify, Loudr, Amazon and Google Play! 80 Days - inkle's award-winning narrative adventure. A Video Game About a Woman Talking to the Police - HER STORY.

Prune - Out Now! BAFTA Games Awards. Virginia (video game) - Wikipedia. Players experience the game from the first-person perspective. The game features a large cast of animated characters, such as your FBI partner Maria Halperin. Official website. The Fastest VR Shooter Yet - Serious Sam VR: The First Encounter. Unravel - Official Site. Rez Infinite Game. Stardew Valley Will Make You A Happier Person. ABZÛ. Playdead - Inside. Buy INSIDE: “MASTERPIECE! Inside is a 2D puzzle platformer that builds upon what made Limbo great, and in fact builds something greater.” - 10/10 “Inside expands on the concepts and scope of its predecessor in wildly creative ways, and it's so immaculately designed and constructed from top to bottom that it almost feels suitable for display in an art museum.

ALL THE DELICATE DUPLICATES. Festival9. 26th – 29th October GameCity is back! Now in it’s eleventh year, Nottingham’s world-renowned video game festival returns, promising to be bigger than ever! Headlining games industry speakers from across the world will provide a free talks and workshops programme throughout the festival- all hosted at The National Videogame Arcade. BBC Radio 5 live - Let's Talk About Tech, Game On - Tommy Francois; building worlds for Ubisoft. Create your own country. Remember Me with Commentary Part 16: Moral of the Story, Don't Ask Me to Navigate a Mine Field. Burly Men at Sea: A folktale adventure by Brain&Brain.