Dangerous Liaisons. For many people around the world the Arab Spring was a cause for great hope, as thousands of Arabs banded together to overthrow their corrupt and repressive governments. 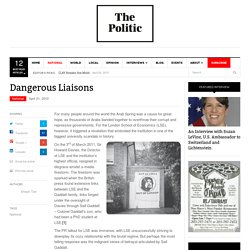 For the London School of Economics (LSE), however, it triggered a revelation that embroiled the institution in one of the biggest university scandals in history. On the 3rd of March 2011, Sir Howard Davies, the Director of LSE and the institution’s highest official, resigned in disgrace amidst a media firestorm. The firestorm was sparked when the British press found extensive links between LSE and the Gaddafi family, links forged under the oversight of Davies through Saif Gaddafi – Colonel Gaddafi’s son, who had been a PhD student at LSE.[1] The PR fallout for LSE was immense, with LSE unsuccessfully striving to downplay its cozy relationship with the brutal regime. 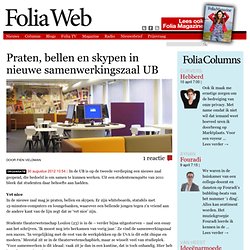 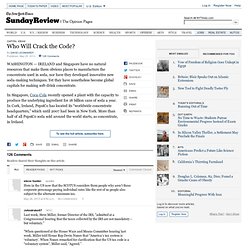 In Cork, Ireland, PepsiCo has located its “worldwide concentrate headquarters,” which until 2007 had been in New York. More than half of all PepsiCo soda sold around the world starts, as concentrate, in Ireland. Singapore. Singapore ( i/ˈsɪŋəpɔr/ or /ˈsɪŋɡəpɔr/), officially the Republic of Singapore, is a sovereign city-state and island country in Southeast Asia. 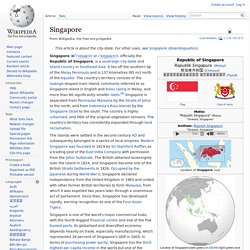 It lies off the southern tip of the Malay Peninsula and is 137 kilometres (85 mi) north of the equator. The country's territory consists of the lozenge-shaped main island, commonly referred to as Singapore Island in English and Pulau Ujong in Malay, and more than 60 significantly smaller islets.[8] Singapore is separated from Peninsular Malaysia by the Straits of Johor to the north, and from Indonesia's Riau Islands by the Singapore Strait to the south.

The country is highly urbanised, and little of the original vegetation remains. VPRO tegenlicht: Onze man in Singapore. Singapore Inc. Mini-staatjes: De republiek Singapore Winsemius rol in founding. Dr Albert Winsemius. SUMMARY He was a Dutch Economist who was Singapore's long-time economic advisor for his invaluable contribution to its development. 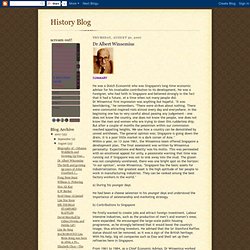 He was a foreigner, who had faith in Singapore and believed strongly in the fact that it had a future, at a time when not many people did.Dr Winsemius' first impression was anything but hopeful. "It was bewildering," he remembers. "There were strikes about nothing. There were communist-inspired riots almost every day and everywhere. In the beginning one has to very careful about passing any judgement - one does not know the country, one does not know the people, one does not know the men and women who are trying to steer this rudderless ship. History Blog: Dr Albert Winsemius. SUMMARY He was a Dutch Economist who was Singapore's long-time economic advisor for his invaluable contribution to its development. 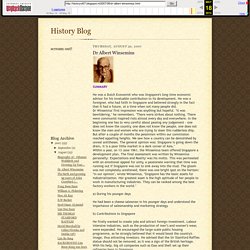 He was a foreigner, who had faith in Singapore and believed strongly in the fact that it had a future, at a time when not many people did.Dr Winsemius' first impression was anything but hopeful. "It was bewildering," he remembers. "There were strikes about nothing. There were communist-inspired riots almost every day and everywhere. Image BOfy. Dr. Albert Winsemius, Singapore’s true founding father? Dr. 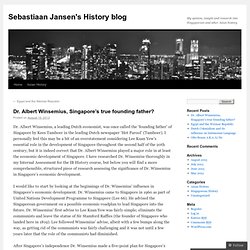 Albert Winsemius, a leading Dutch economist, was once called the ‘founding father’ of Singapore by Kees Tamboer in the leading Dutch newspaper ‘Het Parool’ (Tamboer). I personally feel this may be a bit of an overstatement considering Lee Kuan Yew’s essential role in the development of Singapore throughout the second half of the 20th century, but it is indeed correct that Dr. Albert Winsemius played a major role in at least the economic development of Singapore. 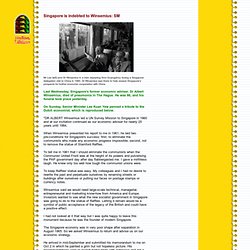 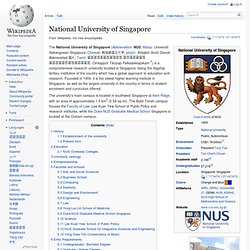 Is a comprehensive research university located in Singapore, being the flagship tertiary institution of the country which has a global approach to education and research. Founded in 1905, it is the oldest higher learning institute in Singapore, as well as the largest university in the country in terms of student enrolment and curriculum offered. The university's main campus is located in southwest Singapore at Kent Ridge, with an area of approximately 1.5 km2 (0.58 sq mi). The Bukit Timah campus houses the Faculty of Law, Lee Kuan Yew School of Public Policy and research institutes, while the Duke-NUS Graduate Medical School Singapore is located at the Outram campus. Yale-NUS College. Trading Academic Freedom for Foreign Markets. By Marjorie Heins, founder, Free Expression Policy Project The current controversy over Yale University’s planned campus in Singapore is, at bottom, an argument over how much compromise on free speech is justified in exchange for the presumed benefits of locating branches of U.S. universities within authoritarian regimes. 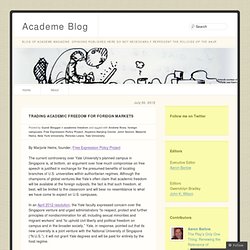 Although the champions of global ventures like Yale’s often claim that academic freedom will be available at the foreign outposts, the fact is that such freedom, at best, will be limited to the classroom and will bear no resemblance to what we have come to expect on U.S. campuses. In an April 2012 resolution, the Yale faculty expressed concern over the Singapore venture and urged administrators “to respect, protect and further principles of nondiscrimination for all, including sexual minorities and migrant workers” and “to uphold civil liberty and political freedom on campus and in the broader society.”

Some of the turmoil at Yale has to do with governance. YaledailyNews: Unease grows over freedoms at Yale-NUS. Concerns over political freedoms at Yale-NUS College resurfaced this week after a Monday article in the Wall Street Journal quoted Pericles Lewis, the college’s president, as saying political parties and political protests will not be allowed on campus. Lewis claims the article incorrectly paraphrased him on the latter statement. In an interview with the News Wednesday, he said students at Yale-NUS will be guaranteed “all forms of political expression consistent with Singaporean law” and that he does not expect any restrictions on freedom of expression to be “terribly constraining.”

But when pressed on how Yale-NUS would handle political expression that goes beyond what is permitted by Singaporean law, Lewis and University President Richard Levin were unwilling or unable to give clear answers. “I’d rather just have no comment on these things,” he said. YaledailyNews: Yale-NUS students deserve free speech. Just over a year before Yale-NUS opens its doors, top University officials remain unable to explain what constraints on political expression its students will face. The Wall Street Journal reported on July 16 that, according to Yale-NUS President Pericles Lewis, students at the new school will not be allowed to form political parties or stage political protests on campus.

Lewis disputes the paraphrase in the Journal, and he and Yale University President Richard Levin criticized recent press accounts for misrepresenting the new college’s policies on political expression in a statement last week. But neither president has offered a clear explanation of the new college’s policies, making it disappointingly clear that freedom is an afterthought to Yale’s venture into Singapore. YaledailyNews: Miller: Yale’s principles for sale in Singapore. Last Thursday brought news of the final agreement between Yale and the National University of Singapore to open a joint campus. Coverage of this story in the News and the superb editorials of February 11 and April 1 have focused mainly on issues of academic freedom and political repression.

I want to raise another question that has been largely overlooked: the position of lesbian, gay, bisexual, and transgender faculty and students in relation to this new institution, Yale-NUS. Many years ago, Yale added sexual orientation to the list of protections covered by its non-discrimination policy. In their announcement on Thursday, President Levin and Provost Salovey stated that “our agreement with NUS … affirms consistency with Yale’s policy on non-discrimination.”

This is impossible. I am a gay faculty member. The new campus’ dean-designate Prof. Professor Bailyn describes a process of vetting faculty participants to ensure they “understand what they’re getting into.” Christopher L. Yale values to be tested in Singapore. Two staff reporters for the News, Ava Kofman and Tapley Stephenson, traveled to Singapore over spring break, interviewing more than 80 sources on the founding of Yale-NUS College — how Singaporeans view the project, how the liberal arts function in Singapore and how the country’s values differ from those on Yale’s campus.

This is the final part of the three-part series. (Read part 1 and part 2.) Yale-Singapore Venture to Forbid Political Protest. Response from Pericles Lewis, Yale-NUS President, to July 16th, 2012 WSJ article “Singapore’s Venture With Yale to Limit Protests” « The Liberal Arts in Singapore. WSJ article: /SB100014240527023039337 04577530524046581142.html Dear All, I have written to the Wall Street Journal to express my dissatisfaction with their summary of my interview last week.

In particular, the following paragraph contains an inaccurate summary: Wall Street Journal: “Students at the new school “are going to be totally free to express their views,” but they won’t be allowed to organize political protests on campus, said Pericles Lewis, the college’s new president, in an interview last week.” TR EMERITUS: Yale to ensure students in Singapore have freedom of expression « Thank you for considering our VMS membership. While you do not need to signup as a member to enjoy most of the goodies in TR Emeritus (TRE), membership comes with additional privileges. For example, Dedicated Member’s Forum, Unique Display Name, Website Link in Display Name, Rate Articles, Unlimited Access to Archived Articles, etc. The membership fees collected will go towards the continued operation of TRE. Jim Sleeper: How Yale's Singapore Venture Imperils Liberal Education. Jim Sleeper: Yale Steps Into the Authoritarian Abyss. Jim Sleeper: Yale Has Gone to Singapore, But Can It Come Back?