Rachel Carson. Rachel Louise Carson (May 27, 1907 – April 14, 1964) was an American marine biologist and conservationist whose book Silent Spring and other writings are credited with advancing the global environmental movement. 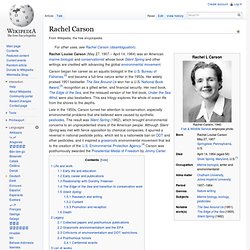 Carson began her career as an aquatic biologist in the U.S. Bureau of Fisheries,[2] and became a full-time nature writer in the 1950s. Her widely praised 1951 bestseller The Sea Around Us won her a U.S. National Book Award,[3] recognition as a gifted writer, and financial security. Her next book, The Edge of the Sea, and the reissued version of her first book, Under the Sea Wind, were also bestsellers. Late in the 1950s, Carson turned her attention to conservation, especially environmental problems that she believed were caused by synthetic pesticides. Life and work[edit] Early life and education[edit] Carson was born on May 27, 1907, on a small family farm near Springdale, Pennsylvania, just up the Allegheny River from Pittsburgh.

Early career and publications[edit] Silent Spring. Silent Spring is an environmental science book written by Rachel Carson and published by Houghton Mifflin on September 27, 1962.[1] The book documented the detrimental effects on the environment—particularly on birds—of the indiscriminate use of pesticides. Carson accused the chemical industry of spreading disinformation and public officials of accepting industry claims unquestioningly.

In the late 1950s, Carson turned her attention to conservation, especially environmental problems that she believed were caused by synthetic pesticides. The result was Silent Spring (1962), which brought environmental concerns to the American public. Silent Spring was met with fierce opposition by chemical companies, but it spurred a reversal in national pesticide policy, led to a nationwide ban on DDT for agricultural uses,[2] and inspired an environmental movement that led to the creation of the U.S. Environmental Protection Agency.[3][4] Research and writing[edit] Content[edit] Guardian: Fifty years on, the silence of Rachel Carson's spring consumes us. Rachel Carson, author of Silent Spring, in the woods near her home in 1962. 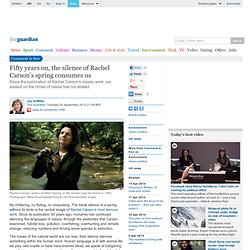 Photograph: Alfred Eisenstaedt/Time & Life Pictures/Getty Image No chittering, no fluting, no chissicking. The bleak silence of a spring without its birds is the central image of Rachel Carson's most famous work. Since its publication 50 years ago, humanity has continued silencing the languages of nature, through the pesticides that Carson examined, habitat loss, pollution, overfishing, overhunting and climate change, reducing numbers and driving some species to extinction. The losses of the natural world are our loss, their silence silences something within the human mind. The human mind needs nature in order to think most deeply. Rachel Carson was truly a prophet of things to come. The decline of the birds and the bees - Rachel Carson's Silent Spring revisited. Monitoring data reveal significant changes in the number of meadow birds in the Netherlands. 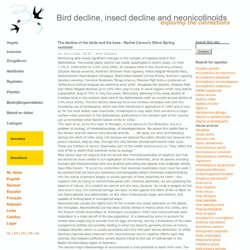 The overall yearly decline has nearly quadrupled in recent years, i.e. from 1.2% in 1990-2000 to 4.6% since 2000. All meadow birds in the monitoring scheme (Skylark Alauda arvensis, Northern Shoveler Anas clypeata, Yellow Wagtail Motacilla flava, Oystercatcher Haematopus ostralegus, Black-tailed Godwit Limosa limosa, Northern Lapwing Vanellus vanellus, Common Redshank Tringa totanus, Meadow Pipit Anthus pratensis en Tufted Duck Aythya fuligula) are declining since 2000. Songbirds like Skylark, Meadow Pipit and Yellow Wagtail declined up to 30% from year to year in some regions which may lead to a population drop of 75% in only five years.

Aa carson speeking before congress. Merchants of Doubt by Naomi Oreskes and Erik M Conway. Rachel Carson is generally viewed as an environmental heroine, a courageous campaigner whose book, Silent Spring, alerted the world to the dangers of the indiscriminate use of pesticides. 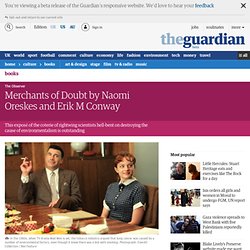 Hers was a success story, the tale of a woman who highlighted a serious problem – that the anti-mosquito agent DDT was building up in the food chain where it was killing millions of birds and animals – and who helped introduce a global ban on use of the chemical. At least that is the common appreciation of Carson. However, a brief search of her name on the internet today produces an unexpected response. According to many websites, Carson – by all accounts a pleasant, amiable woman – was a mass murderer who killed more people than the Nazis.

This dramatic claim is based on her campaign against DDT, which, it is alleged, has led to the deaths of countless Africans from malaria. So why this hysterical vilification? Real science is dismissed as "junk" while misrepresentations are offered in its place. Uitstervende bij bedreiging voor ons eten.