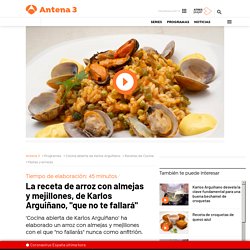 Reconnect With Friends and Family Around a Homemade Paella. The next time you want to have a pizza night with friends or family at home, consider making it a paella night instead. 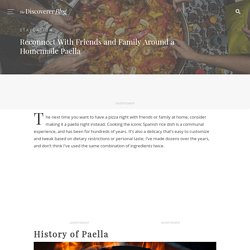 Cooking the iconic Spanish rice dish is a communal experience, and has been for hundreds of years. It’s also a delicacy that’s easy to customize and tweak based on dietary restrictions or personal taste; I’ve made dozens over the years, and don’t think I’ve used the same combination of ingredients twice. History of Paella While paella can now come in many forms and encompass any number of different ingredient combinations, there’s little doubt that the dish originated around the Spanish city of Valencia. The region was the largest rice producer in Spain after the Moors introduced the grain in the early 700s AD, and that abundance provided the raw materials for this infinitely customizable meal. Today, paella is probably one of the more expensive dishes on the menu at your favorite tapas restaurant, but it actually comes from humble beginnings.

Tahdig. How to Make Tahdig If you like crackly pan scraps, have an appetite for anything extra crispy, or if you prefer your food more darkly tanned than pale, then you must try making tahdig (pronounced tah-DEEG). 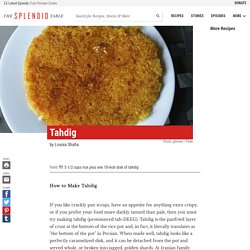 Tahdig is the panfried layer of crust at the bottom of the rice pot and, in fact, it literally translates as "the bottom of the pot" in Persian. When made well, tahdig looks like a perfectly caramelized disk, and it can be detached from the pot and served whole, or broken into jagged, golden shards. At Iranian family feasts, tahdig is possibly the one dish that will disappear entirely from the table--there are simply no leftovers. Ever. Persianmama. Egg Fried Rice with Prawns and Peas Recipe: How to Make Egg Fried Rice with Prawns and Peas. 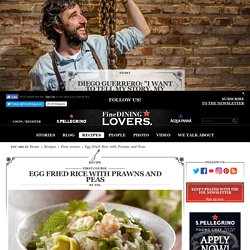 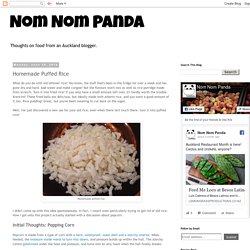 You know, the stuff that's been in the fridge for over a week and has gone dry and hard. Add water and make congee? But the flavours won't mix as well as rice porridge made from scratch. Turn it into fried rice? If you only have a small amount left over, it's hardly worth the trouble. Well, I've just discovered a new use for your old rice, even when there isn't much there—turn it into puffed rice! I didn't come up with this idea spontaneously. Initial Thoughts: Popping Corn Popcorn is made from a type of corn with a hard, waterproof, outer shell and a starchy interior. Although most of the popcorn sold in New Zealand is in the snowflake-like "butterfly" shape, we came across the other commercial variety with round "mushroom" shaped kernels while in Korea. I tried to discuss these popcorn varieties with my Korean friends, and they had no idea what I was talking about. 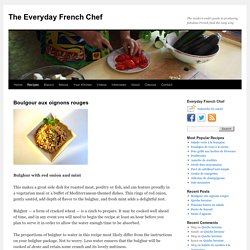 Thin rings of red onion, gently sautéd, add depth of flavor to the bulghur, and fresh mint adds a delightful zest. Bulghur — a form of cracked wheat — is a cinch to prepare. It may be cooked well ahead of time, and in any event you will need to begin the recipe at least an hour before you plan to serve it in order to allow the water enough time to be absorbed. The proportions of bulghur to water in this recipe most likely differ from the instructions on your bulghur package. 1 cup bulghur2 cups water1 tsp. sea salt or table salt1 red onion 1 tbsp. olive oila few sprigs of fresh mintsalt and freshly ground black pepper Measure out the bulghur into a small bowl. Bring the water to a boil in a medium-sized pot. Turn the heat down to low and tip the bowl of bulghur into the water. Black Rice Recipe. Minado's Perfect Sushi Rice Recipe. Poha Chivda (Indian Flattened Rice Snack) Recipe.

The other turkey. I stumbled upon a patch of mint in the side yard last week and the prospect of creating a Thanksgiving meal suddenly changed from dreary to dreamy. 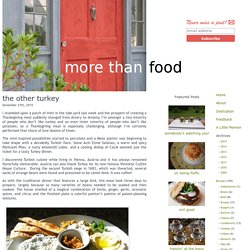 I’m amongst a tiny minority of people who don’t like turkey and an even tinier minority of people who don’t like potatoes, so a Thanksgiving meal is especially challenging, although I’ve certainly performed that chore of love dozens of times. The mint-inspired possibilities started to percolate and a Meze platter was beginning to take shape with a decidedly Turkish flare. Arancini di Riso. Directions Pour enough oil in a heavy large saucepan to reach the depth of 3 inches. 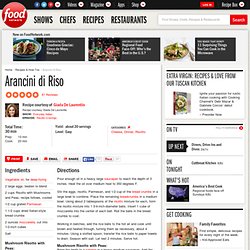 Heat the oil over medium heat to 350 degrees F. Stir the eggs, risotto, Parmesan, and 1/2 cup of the bread crumbs in a large bowl to combine. Place the remaining breadcrumbs in a medium bowl. Using about 2 tablespoons of the risotto mixture for each, form the risotto mixture into 1 3/4-inch-diameter balls. Working in batches, add the rice balls to the hot ail and cook until brown and heated through, turning them as necessary, about 4 minutes. Mushroom Risotto with Peas: Bring the broth to a simmer in a heavy medium saucepan. IHM Leftover Rice Cakes.