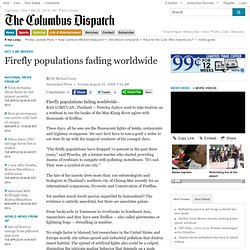 These days, all he sees are the fluorescent lights of hotels, restaurants and highway overpasses. He says he'd have to row a good 2 miles to see trees lit up with the magical creatures of his younger days. "The firefly populations have dropped 70 percent in the past three years," said Preecha, 58, a former teacher who started providing dozens of rowboats to compete with polluting motorboats. "It's sad. The fate of the insects drew more than 100 entomologists and biologists to Thailand's northern city of Chiang Mai recently for an international symposium, Diversity and Conservation of Fireflies. Yet another much-loved species imperiled by humankind? No single factor is blamed, but researchers in the United States and Europe mostly cite urban sprawl and industrial pollution that destroy insect habitat. Shedding light on fireflies. Looking for fireflies is a well-loved summer-night activity, but now there's a new reason to get outside and find those flashy little insects. 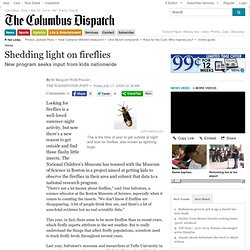 The National Children's Museum has teamed with the Museum of Science in Boston in a project aimed at getting kids to observe the fireflies in their area and submit that data to a national research program. "There's not a lot known about fireflies," said Don Salvatore, a science educator at the Boston Museum of Science, especially when it comes to counting the insects. "We don't know if fireflies are disappearing. Illumination, pesticides might be causing a decline in Ohio firefly numbers. It sure seems as if there are fewer fireflies lighting up our backyards. 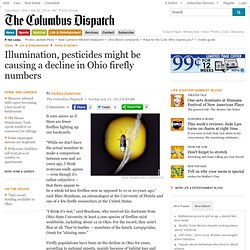 “While we don’t have the actual numbers to make a comparison between now and 20 years ago, I think everyone really agrees — even though it’s rather subjective — that there appear to be a whole lot less fireflies now as opposed to 10 or 20 years ago,” said Marc Branham, an entomologist at the University of Florida and one of a few firefly researchers in the United States.

“I think it’s real,” said Branham, who received his doctorate from Ohio State University.At least 2,000 species of fireflies exist worldwide, including about 12 in Ohio. For the record, they aren’t flies at all. They’re beetles — members of the family Lampyridae, Greek for “shining ones.” Firefly populations have been on the decline in Ohio for years, according to national experts, mainly because of habitat loss and pesticide use. The flashes, called bioluminescence, stem from a chemical reaction inside the insect. . • Install a water feature. Why Do Fireflies Glow? From Mother Nature Network's Chanie Kirschner: It seems kind of magical, doesn’t it? 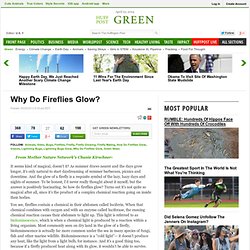 As summer draws nearer and the days grow longer, it’s only natural to start daydreaming of summer barbecues, picnics and downtime. And the glow of a firefly is a requisite symbol of the lazy, hazy days and nights of summer. To be honest, I’d never really thought about it myself, but the answer is positively fascinating. A Citizen Science Project-2.docx - Dropbox. Firefly & Lightning Bug Facts, Pictures, Information About Firefly Insect Disappearance. Some fireflies flash in sync to woo mates. U.S. scientists have shed light on the mystery of why the males of some species of firefly flash in unison and in a pattern: It's to help females identify them as suitable mates. University of Connecticut professor of physiology and neurobiology Andrew Moiseff — who is not an entomologist but admits to being fascinated by fireflies since he was a student — teamed up with Georgia Southern University biology professor Jonathan Copeland to study why some fireflies flash in sync.

The results of their study, in which they flashed light-emitting diodes both in a pattern and randomly at female fireflies in a lab setting, suggest that synchronous flashing allows the female fireflies to recognize suitable mates. Moiseff and Copeland began studying fireflies from the Great Smoky Mountains National Park in Tennessee after a naturalist from the southern state told one of them that the fireflies at her summer cabin in the park flashed synchronously. Firefly Facts. Fireflies are familiar, but few realize that these insects are actually beetles, nocturnal members of the family Lampyridae. 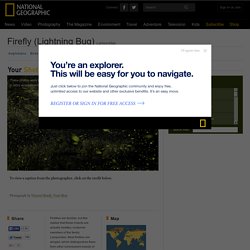 Most fireflies are winged, which distinguishes them from other luminescent insects of the same family, commonly known as glowworms. There are about 2,000 firefly species. These insects live in a variety of warm environments, as well as in more temperate regions, and are a familiar sight on summer evenings. Fireflies love moisture and often live in humid regions of Asia and the Americas. In drier areas, they are found around wet or damp areas that retain moisture. Everyone knows how fireflies got their name, but many people don't know how the insects produce their signature glow. Firefly light is usually intermittent, and flashes in patterns that are unique to each species. Museum of Science Firefly Watch. Firefly Science Org. Audubon Citizen Science Bird Count. Follow us: More Sharing ServicesShare Share on linkedinShare on stumbleupon|Share on printfriendlyShare on email Citizen Science Copyright 2014 National Audubon Society, Inc. 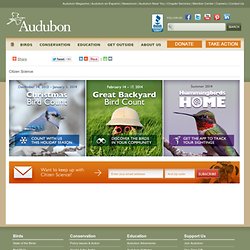