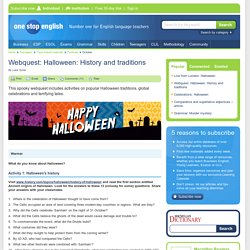 Live from London: Halloween. By Luke and James Vyner Set in Kings Cross, London, this video includes interviews with Londoners talking about Halloween and things they find scary. 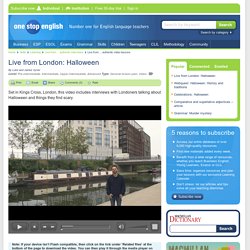 Note: If your device isn’t Flash compatible, then click on the link under ‘Related files’ at the bottom of the page to download the video. You can then play it through the media player on your device (e.g. iTunes). We’ve put together a video for you to use as part of a Halloween-themed lesson. Get your students’ attention by playing the video as a warmer and then after a few comprehension questions, ask your students to discuss the same questions in pairs or small groups. Christmas Customs and Christmas Traditions, The History of Christmas. A Christmas card from England. Video Of The Week - The History Of Thanksgiving. By Meera Dolasia on November 24, 2014 CCSSNCSS-1Grades: K-3Grades: 3-8Word Search On November 27th, North Americans will celebrate Thanksgiving, an annual holiday during which families and friends get together for a scrumptious feast and reflect on all the things they are grateful for. 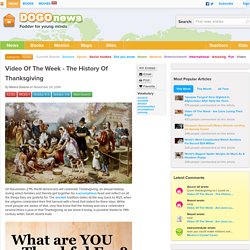 The ancient tradition dates all the way back to 1621, when the pilgrims celebrated their first harvest with a feast that lasted for three days. While most people are aware of that, very few know that the holiday was once celebrated several times a year or that Thanksgiving as we know it today, is possible thanks to 19th century writer, Sarah Josefa Hale. Though best known for the nursery rhyme "Mary had a little lamb", it is her 20-year crusade that led President Abraham Lincoln to make a proclamation on October 3rd, 1863, declaring the last Thursday of November, as the "Day of Thanksgiving" for entire United States of America.

Article Comprehension:Who started the tradition of Thanksgiving? Pumpkin Carving Maestro Ray Villafane Creates Yet Another Masterpiece. No Halloween celebration would be complete without a peek at pumpkin carver extraordinaire Ray Villafane's incredible masterpieces. 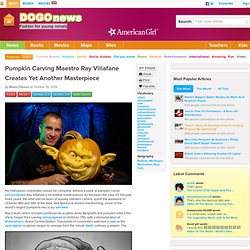 As has been the case for the past three years, the artist and his team of equally talented carvers, spent the weekend of October 18th and 19th at the New York Botanical Garden transforming, some of the world's largest pumpkins into scary zombies. Ray's team, which includes professional sculptor Andy Bergholtz and pumpkin artist Chris Viera, began their carving extravaganza on October 17th, with a demonstration at Manhattan's Grand Central Station. Thousands of commuters watched in awe as the apocalyptic sculpture began to emerge from the robust albeit, ordinary pumpkin. The following day, the team along with their partially completed project, moved to the New York Botanical Garden, where they continued to morph giant pumpkins into grotesquely scary creatures.

Diwali, India's Glittering Festival Of Lights! India is known for many colorful and fun festivals. 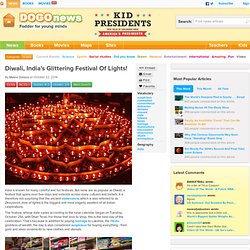 But none are as popular as Diwali, a festival that spans over five-days and extends across many cultures and beliefs. It is therefore not surprising that the ancient observance, which is also referred to as Deepavali, (row of lights) is the biggest and most eagerly awaited of all Indian celebrations. The festival, whose date varies according to the lunar calendar, began on Tuesday, October 21st, with Dhan Teras. Halloween - ESL Listening Comprehension Exercise. The Valentine's Day Song: A Cute, Funny Valentines Song by Bryant Oden. Song for christmas lesson. New Year's resolutions. CBBC Newsround - Christmas traditions around the world. CBBC Newsround - Guide: How to reduce Christmas waste. CBBC Newsround - Santa quiz - how much do you know about Santa Claus? CBBC Newsround - Christmas quiz. Haunted History of Halloween — History.com Video. The Legend of Sleepy Hollow (Washington Irving) Text & MP3 File.

It is about something strange that happed long ago in a valley called "Sleepy Hollow". It was written by Washington Irving. The story is told by Doug Johnson. Narrator: The valley known as Sleepy Hollow hides from the world in the high hills of New York state. Near Sleepy Hollow is a village called Tarry Town. Ichabod did not make much money as a teacher. Among the ladies Ichabod taught was one Katrina Van Tassel. Ichabods eyes opened wide when he saw the riches of Katrinas farm: the miles of apple trees and wheat fields, and hundreds of fat farm animals. Happy Valentine's Day! It's Valentine's Day! 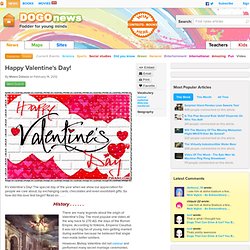 The special day of the year when we show our appreciation for people we care about, by exchanging cards, chocolates and even exorbitant gifts. So how did this love fest begin? Read on . . . . . History . . . . . . 14+ Activities & Resources for Celebrating Valentine’s Day. “Life’s greatest happiness is to be convinced we are loved.” ~ Victor Hugo Valentine’s Day is celebrated worldwide. 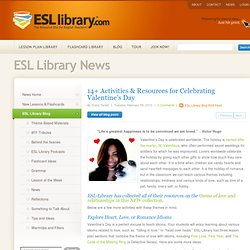 The holiday is named after the martyr, St. Watch Out! It's April Fool's Day. While April 1st, better known as April Fool's Day, is technically not a holiday, it is a favorite especially for people who like to pull pranks. 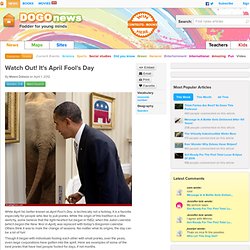 While the origin of this tradition is a little sketchy, some believe that the light-hearted fun began in 1582, when the Julian calendar (which began the New Year in April), was replaced with today's Gregorian calendar. Others think it was to mark the change of seasons. No matter what its origins, the day can be a lot of fun! Great Great Grandmother Celebrates 101st Birthday Paragliding. By Isabelle Berkopec on March 25, 2012 Word Search Most people don't live to see 100. 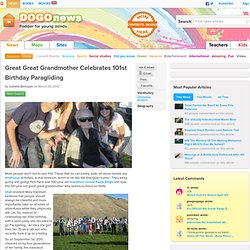 Those that do can barely walk, let alone handle any strenuous activities.