Analysts Predict a Russian Descent Into Madness. Pavel Golovkin / Pool / ReutersDespite the panelists' conclusions on the Kremlin's hurdle-laden road ahead, it does not appear that Russia's economic downturn will necessarily force Putin's hand with regard to reforms. 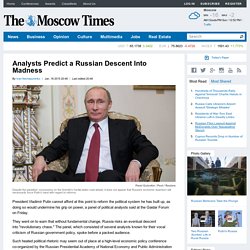 President Vladimir Putin cannot afford at this point to reform the political system he has built up, as doing so would undermine his grip on power, a panel of political analysts said at the Gaidar Forum on Friday. They went on to warn that without fundamental change, Russia risks an eventual descent into "revolutionary chaos. " The panel, which consisted of several analysts known for their vocal criticism of Russian government policy, spoke before a packed audience. Such heated political rhetoric may seem out of place at a high-level economic policy conference co-organized by the Russian Presidential Academy of National Economy and Public Administration (RANEPA) and the Gaidar Institute for Economic Policy. Rapid Deterioration Perestroika Impossible Putin's Rating. 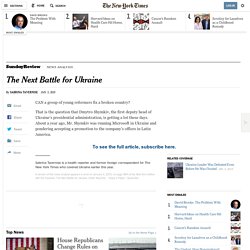 The Myth of the Russian Oligarchs. What have we learned in the year since Ukraine’s EuroMaidan? By Olga Onuch November 26 at 10:07 AM A file photo taken on December 8, 2013 shows protesters shouting slogans near placards and a giant poster of then jailed Ukrainian opposition leader Yulia Tymoshenko hung on a giant fir-less metal Christmas tree during a mass rally called “The March of a Million” on Kiev’s Independence Square. 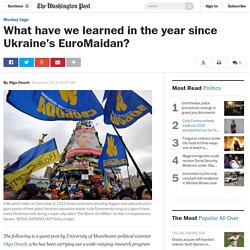 SERGEI SUPINSKY/AFP/Getty Images The following is a guest post by University of Manchester political scientist Olga Onuch, who has been carrying out a wide-ranging research program on protest mobilization and political participation in Ukraine, including a continuous on-site survey (the Ukrainian Protest Participant Survey), interviews and focus groups discussions with protesters, activist leaders and politicians, and most recently a new three wave Electoral Survey in Ukraine along with Henry Hale, Timothy Colton, and Nadiya Kravets. The EuroMaidan protesters were not only from central and western Ukraine, and were certainly not only Ukrainian speakers. Putin's Vision of World Order - Thoughts from Kiev. With the official death toll topping 4000 since the supposed “cease fire” on Sept 5 (and many more unconfirmed deaths suspected), and with that ceasefire violated by over 50 heavy artillery shelling incidents EVERY DAY, it is becoming clear that the extraordinary patience and restraint shown by the Ukrainian side has failed to appease the Russian mercenaries and regular forces who have invaded the Donbas. 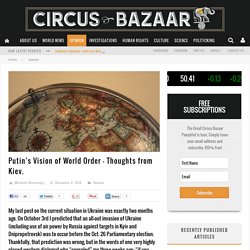 Indeed the military buildup both on Ukrainian territory, and near the border continues. Vladimir Putin and The War in Ukraine - POLITICO Magazine. American diplomats have now got what they wanted. 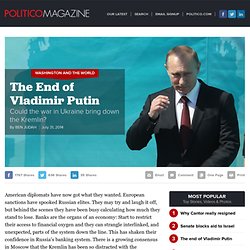 European sanctions have spooked Russian elites. They may try and laugh it off, but behind the scenes they have been busy calculating how much they stand to lose. Banks are the organs of an economy: Start to restrict their access to financial oxygen and they can strangle interlinked, and unexpected, parts of the system down the line. This has shaken their confidence in Russia’s banking system.

Yes, It Could Happen Again - Roger Cohen. Instability in Ukraine, chaos in Syria, conflict in the East China Sea—the trigger points for World War III are in place. 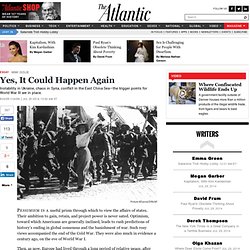 Picture-Alliance/DPA/AP Pessimism is a useful prism through which to view the affairs of states. Their ambition to gain, retain, and project power is never sated. Optimism, toward which Americans are generally inclined, leads to rash predictions of history’s ending in global consensus and the banishment of war. Exclusive: Ukraine rebel commander acknowledges fighters had BUK missile. What It's Like to Walk Through the Wreckage of Malaysia Airlines Fligh.

Last Saturday, I woke up on a green stretcher. 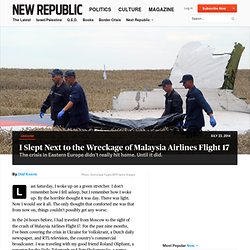 I don't remember how I fell asleep, but I remember how I woke up. By the horrible thought it was day. There was light. Now I would see it all. Those Mysterious Tanks in Ukraine. The appearance of three mystery tanks in east Ukraine may be a serious escalation of the conflict (as Russia throws extra military hardware into the fray) or another one of those desperate attempts to prove a Russian presence. 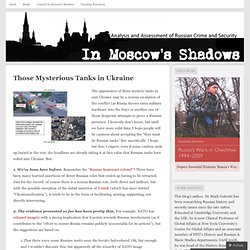 I honestly don’t know, but until we have more solid data, I hope people will be cautious about accepting the “they must be Russian tanks” line uncritically. I hope, but don;’t expect: even if some caution ends up buried in the text, the headlines are already taking it at face value that Russian tanks have rolled into Ukraine. But: 1. We’ve been here before. Ice Cream, Corpses, and the Big Bear: Repatriating Dead Russians From Ukraine. “The factory is closed! 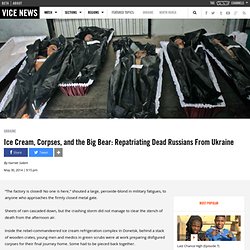 No one is here,” shouted a large, peroxide-blond in military fatigues, to anyone who approaches the firmly closed metal gate. Sheets of rain cascaded down, but the crashing storm did not manage to clear the stench of death from the afternoon air. Inside the rebel-commandeered ice cream refrigeration complex in Donetsk, behind a stack of wooden crates, young men and medics in green scrubs were at work preparing disfigured corpses for their final journey home. Tragedy and Confusion in Odessa. The besieged Odessa Union building. 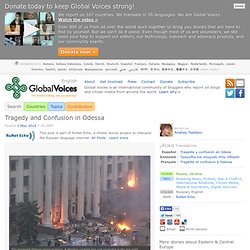 A Molotov cocktail has just exploded in the top right corner of the frame. Dozens died in the ensuing fire. YouTube screenshot. Russia’s buildup on the Ukraine border. The Invasion of Ukraine (Dispatch Thirty-One) VICE News reporter Simon Ostrovsky tells the full story of his abduction and captivity in eastern Ukraine by pro-Russia forces. On Monday April 21, VICE News reporters Simon Ostrovsky and Freddie Paxton were stopped at a checkpoint by armed pro-Russia forces loyal to the self-proclaimed mayor of Sloviansk, Vyacheslav Ponomarev. They were pulled from their car, along with three other journalists they were traveling with. After a thorough search and questioning, Paxton and the three other journalists were released.

The Invasion of Ukraine (Dispatch Thirty) Is Russia Suffering From Post-Traumatic Stress Disorder? New attacks on media in eastern Ukraine, warns OSCE representative. The revolution in Putin’s head. When Ukrainians took to the streets to protest their government in late November, they hoped to launch a revolution. What they didn’t realize when they toppled President Viktor Yanukovich in February is that a larger revolution would be in Vladimir Putin’s head. CRIMEA: United We Shout for Peace. They are not afraid of the soldiers. They are not afraid of cold. Crimean women are afraid of only one thing: not being heard. Ukraine crisis moving from bluster to diplomacy - World. For all those once again predicting the start of World War III — or at least a Ukrainian civil war — it's time for a closer look given the behaviour of the parties involved over the past few days. Take the group of enthused, pro-Russian gunmen who took over Donetsk's city council building in Eastern Ukraine yesterday.

While not exactly a commonly accepted form of expression, theirs was an act meant for world consumption. Why else would they invite the media in for a tour and a chat? "Our main demand is for Ukraine's parliament to pass a law about local referendums on self-determination," said their spokesman. Just about everything that has resembled a brush with violence in this crisis has been just that, a threat, a gesture, just a step in what has become a new Cold War dance.