How to Destroy Neoliberalism: Kill 'Homo Economicus' By Nick Hanauer This piece is adapted from a speech delivered September 30th at MIT, where Nick Hanauer won the 2018 Harvard and MIT Humanist of the Year award. 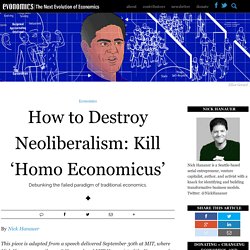 Read more about the award, as well as Democracy Journal’s editor Michael Tomasky’s Q&A with Hanauer, here. I’m thrilled to receive this award from such distinguished hosts—but I won’t lie: When I was told I would be honored as the “Humanist” of the year, the first thing I did was double-check the definition to make sure it was a good thing. And here I am. So—thanks! 25 Definitions of Big Data. Q: Can you please provide me with a definition of Big Data? A: The definition of Big Data is a moving target. In order to make it possible to follow the discussion, as it evolves, we have started a list of definitions of Big Data, as we read them on the internet. .big-list li {margin:20px;} .normal-list li {margin:5px;} "Big data is a collection of data sets so large and complex that it becomes difficult to process using on-hand database management tools or traditional data processing applications. The challenges include capture, curation, storage, search, sharing, transfer, analysis, and visualization. 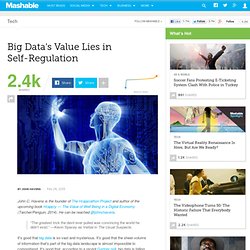 Havens is the founder of The H(app)athon Project and author of the upcoming book H(app)y — The Value of Well Being in a Digital Economy (Tarcher/Penguin, 2014). He can be reached @johnchavens. “The greatest trick the devil ever pulled was convincing the world he didn’t exist.” Nate Silver on the Art and Science of Prediction. Soon, You'll Know As Much About What You Buy As the Company That Made It. By David Berreby The term "Big Data" naturally conjures up images of Big Users, like the government or Google or Costco. 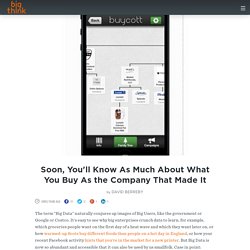 It's easy to see why big enterprises crunch data to learn, for example, which groceries people want on the first day of a heat wave and which they want later on, or how warmed-up Scots buy different foods than people on a hot day in England, or how your recent Facebook activity hints that you're in the market for a new printer. The One Infographic About the Digital Revolution You Need to Understand. What You’ll Do Next. Other efforts to predict behavior were based on models of human nature. 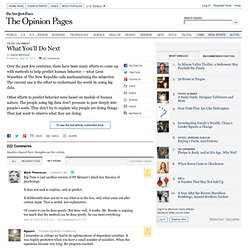 The people using big data don’t presume to peer deeply into people’s souls. They don’t try to explain why people are doing things. They just want to observe what they are doing. How to Tell a Story with Data - Jim Stikeleather - Harvard Business Review. Cities and data: By the numbers. Making data analytics work: Three key challenges. By now, most companies recognize that they have opportunities to use data and analytics to raise productivity, improve decision making, and gain competitive advantage. 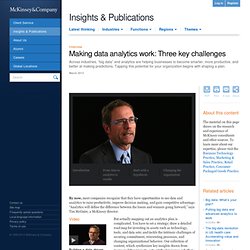 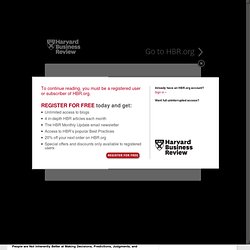 Some of it, like Gary Marcus’s New Yorker post “Steamrolled by Big Data,” is insightful and well-reasoned (even though I have my quibbles with some of his points). This is not surprising, since he’s a neuroscientist as well as a writer, and so quite comfortable with data. Unfortunately, some other prominent commentators clearly aren’t. Eric Schmidt and Jared Cohen: The Dark Side of the Digital Revolution. 4 Barriers Stand Between You and Big Data Insight. CIO — Over the past three years or so, the buzz around big data has continued to grow. 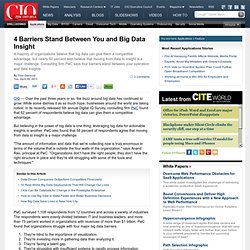 While some dismiss it as so much hype, businesses around the world are taking notice: In its recently released 5th annual Digital IQ Survey, consulting firm PwC found that 62 percent of respondents believe big data can give them a competitive advantage. But believing in the power of big data is one thing; leveraging big data for actionable insights is another. PwC also found that 58 percent of respondents agree that moving from data to insight is a major challenge. "The amount of information and data that we're collecting now is truly enormous in terms of the volume that is outside the four walls of the organization," says Anand Rao, principal at PwC. The Hidden Biases in Big Data - Kate Crawford. By Kate Crawford | 2:00 PM April 1, 2013 This looks to be the year that we reach peak big data hype. 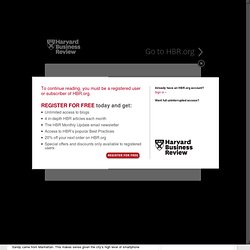 From wildly popular big data conferences to columns in major newspapers, the business and science worlds are focused on how large datasets can give insight on previously intractable challenges. The hype becomes problematic when it leads to what I call “data fundamentalism,” the notion that correlation always indicates causation, and that massive data sets and predictive analytics always reflect objective truth. Big data and development organizations: What happens when you move from theory to practice? The overall interaction of suppliers of the major World Bank awarded projects through all sectors from 2007 to 2013 (see data) – each fully connected subnetwork (clique) represents a collaboration of all suppliers on at least one project It all sounds very good in principle, but what happens when you explore big data for development in practice? 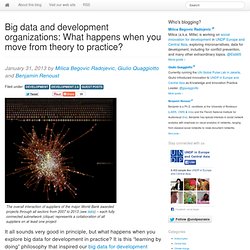 It is this “learning by doing” philosophy that inspired our big data for development challenge with the World Bank and the UN Global Pulse. The Promise And Peril Of Big Data. From health care to city management, we hold out a lot of hope for data--and even more, "Big Data"--to fix our problems. 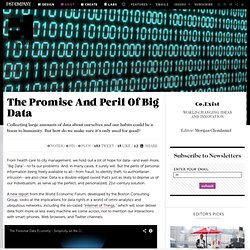 And, in many cases, it surely will. But the perils of personal information being freely available to all--from fraud, to identity theft, to authoritarian intrusion--are also clear. Data is a double-edged sword that’s just as likely to deprive us of our individualism, as serve up the perfect, and personalized, 21st-century solution. A new report from the World Economic Forum, developed by the Boston Consulting Group, looks at the implications for data rights in a world of omni-analytics and ubiquitous networks, including the so-called "Internet of Things," which will soon deliver data from more or less every machine we come across, not to mention our interactions with smart-phones, Web browsers, and Twitter channels.

The report, which is based on interviews over nine months with private and public officials around the world, says it’s time for a rethink. Google's data mining raises questions of national security. An imminent report on an emerging threat to individual privacy to be issued by the European data protection authorities raises even more serious issues than those it is likely to address. The report will consider Google's asserted right to expand its data mining to combine users' personal data across all their accounts and services, including Gmail, internet searching, map and location information and photo sharing, with no way for individuals to opt out. At least one technology blogger has accused Microsoft of planning similar changes, while two new Facebook programmes to aggregate user data with other advertising and loyalty card data have also drawn concern.

Whatever the merits of each case, the larger issue deserves greater public attention. Big Data Social Intelligence: Five Reasons Corporations Need It. Social media has made anyone and everyone a virtual broadcaster, delivering incredible reach to individuals and their messages like never before, regardless of the number of “friends” or “followers” they may have. With billions and billions of messages getting delivered across the Internet and social networks everyday, companies need to become more sophisticated and vigilant in their listening and understanding of these messages and how they can harm or help their business. What many don’t understand is that social media has expanded into streaming big data. This unstructured data is not only big, but also fast and requires hypercomputing processing speed and sophisticated modeling to distill the relevant information and discover the real insight.

First generation tactics like samples and keywords are obsolete given the big, fast, ugly nature of social media. Here are five major reasons that corporations need to incorporate advanced social intelligence (ASI) into their strategies: Analytics Education in the era of Big Data. 5 Ways Big Data Will Change Lives In 2013. By Siddharth Taparia, Senior Director, Portfolio and Strategic Marketing, SAP Recently, I saw firsthand how a new “universal identification” program called Aadhar is taking shape in India. It has potential to improve the lives of millions of poor people via Big Data. Aadhar is an ambitious government Big Data project aimed at becoming the world’s largest biometric database by 2014, with a goal of capturing about 600 million Indian identities. ‘Big data’ is dead. What’s next? How can big data and smart analytics tools ignite growth for your company? Find out at DataBeat, May 19-20 in San Francisco, from top data scientists, analysts, investors, and entrepreneurs.

Register now and save $200! This is a guest post by technology executive John De Goes. Big Data and Data Analysis Predictions for 2013. Chris Varley: Back To The Future Of Big Data. Bigdata-genomics.jpg (JPEG Image, 660×660 pixels) - Scaled (91%) Improving Decision Making in the World of Big Data. Big data and the democratisation of decisions.pdf (application/pdf Object) PanelPicker. What Data Can’t Do.