A Robot Can Print This $32,000 House in as Little as 8 Hours. In Brief PassivDom uses a 3D printing robot that can print the walls, roof, and floor of a 380-square-foot model home in about eight hours. 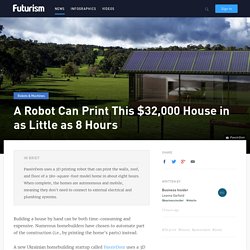 When complete, the homes are autonomous and mobile, meaning they don't need to connect to external electrical and plumbing systems. Building a house by hand can be both time-consuming and expensive. Numerous homebuilders have chosen to automate part of the construction (i.e., by printing the home’s parts) instead. The First FAA Approved 3D Printed Fuselage Parts Are Here And Inside Boeing Airplanes.

Gorgeous glass objects created with a 3D printer. Once the basics for 3D-printer technology were established with plastic filament, the next step was experimenting with a variety of materials, which sees us pretty much smack-bang where we are now. 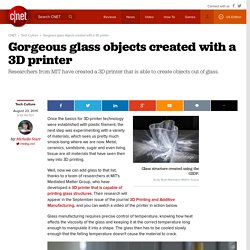 Harvard John A. Paulson School of Engineering and Applied Sciences. Traditional industrial robots are rigid — mostly metal — and are fast, precise and powerful. 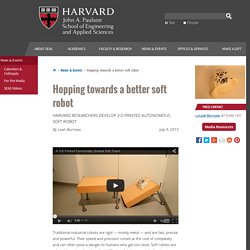 Their speed and precision comes at the cost of complexity and can often pose a danger to humans who get too close. Soft robots are adaptable and resilient but slow, difficult to fabricate, and challenging to make autonomous because most motors, pumps, batteries, sensors, and microcontrollers are rigid. But what if you could combine the autonomy and speed of a rigid robot with the adaptability and resiliency of a soft robot — and do it relatively cheap and fast?

Harvard engineers have done just that, developing one of the first 3-D printed, soft robots that moves autonomously. Described in the July 10, 2015 issue of the journal Science, the design offers a new solution to an engineering challenge that has plagued soft robotics: the integration of rigid and soft materials. “The vision for the field of soft robotics is to create robots that are entirely soft,” said senior author Robert J. NASA challenges ‘makers’ to design 3-D printed habitats for deep-space exploration. One concept for a 3D-printed Moon habitat (credit: NASA) NASA and the National Additive Manufacturing Innovation Institute (America Makes) are holding a new $2.25 million competition, the 3-D Printed Habitat Challenge, to design and build a 3-D printed habitat for deep space exploration, including the agency’s journey to Mars. 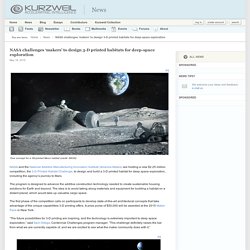 The program is designed to advance the additive construction technology needed to create sustainable housing solutions for Earth and beyond. The idea is to avoid taking along materials and equipment for building a habitat on a distant planet, which would take up valuable cargo space. The first phase of the competition calls on participants to develop state-of-the-art architectural concepts that take advantage of the unique capabilities 3-D printing offers. 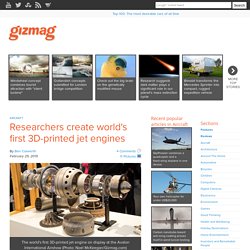 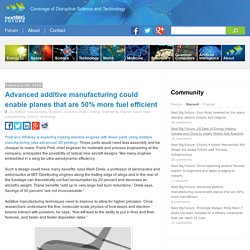 Those parts would need less assembly and be cheaper to make. Frank Preli, chief engineer for materials and process engineering at the company, anticipates the possibility of radical new aircraft designs “like many engines embedded in a wing for ultra-aerodynamic efficiency. Such a design could have many benefits, says Mark Drela, a professor of aeronautics and astronautics at MIT. Distributing engines along the trailing edge of wings and in the rear of the fuselage can theoretically cut fuel consumption by 20 percent and decrease an aircraft’s weight.

These benefits “add up to very large fuel burn reductions,” Drela says. Additive manufacturing techniques need to improve to allow for higher precision. This is a more efficient airplane design using smaller distributed engines. Carvey: The desktop 3D carving machine. 3D printers are the appliance of choice for a new generation of makers keen to rapidly prototype straight from their computer. 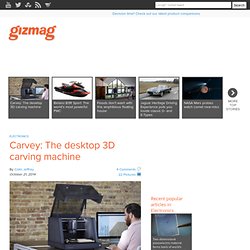 But many materials with which 3D printers can produce items have limitations, and there are others that they can’t work with at all. Enter Carvey – a working prototype of a desktop mounted, rapid-modelling, 3D carving device that can sculpt wood, plastic, and metal into almost any object that you care to design. View all Inventables – the company behind the Carvey – claims that the benefits of being able to mill store-bought-quality items in minutes from a range of materials is the next, and obvious, step beyond 3D printing. 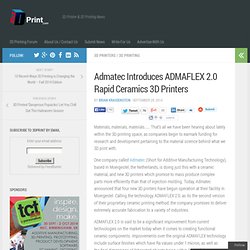 First 3D Printer in Space Will Launch This Month. The first 3D printer ever to fly in space will blast off this month, and NASA has high hopes for the innovative device's test runs on the International Space Station. 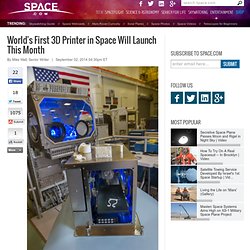 The 3D printer, which is scheduled to launch toward the orbiting lab Sept. 19 aboard SpaceX's unmanned Dragon cargo capsule, could help lay the foundation for broader in-space manufacturing capabilities, NASA officials said. The end result could be far less reliance on resupply from Earth, leading to cheaper and more efficient missions to faraway destinations such as Mars. NASA Tests 3D Printed Rocket Parts. It seems the sky’s the limit when it comes to 3D printing, with NASA’s latest announcement that they have successfully tested rocket engine parts that were produced using the infamous additive manufacturing process. 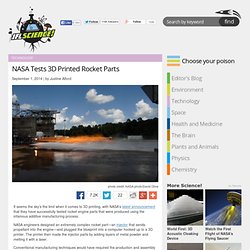 NASA engineers designed an extremely complex rocket part—an injector that sends propellant into the engine—and plugged the blueprint into a computer hooked up to a 3D printer. The printer then made the injector parts by adding layers of metal powder and melting it with a laser. Conventional manufacturing techniques would have required the production and assembly of 163 individual parts, whereas 3D printing cut this down to just two. This not only shaves off a significant amount of time and money, but also produces superior parts that boost performance and are less likely to fail. The Dutch Are 3D Printing a House. My first article here at Singularity Hub was on a plan to 3D print houses in under 24 hours.

What on the surface appeared to be an exciting new idea was, in fact, an exciting old idea recycled in the press every so often but seemingly stuck in PowerPoint presentations and conceptual sketches. Practically, a fully 3D printed house has been just over the horizon for years but (to my knowledge) none had begun construction until now. The Dutch design firm, Dus Architects, recently announced that using their giant KamerMaker 3D printer, work is finally underway on a 3D printed canal house in Amsterdam. The house won’t be printed in a single piece but room by room. And no one’s promising exceptional speed—the hope is to finish three years from now. Each of the house’s 13 rooms will be printed separately and assembled on site. Check Out This Futuristic 3D Printed Car Body. German auto firm, EDAG, made a stir at this year’s Geneva Motor Show with a fully 3D printed auto body called Genesis.

And why not? Its smooth grey curves and futuristic honeycomb ooze sex appeal. 10 completely 3D printed houses appears in Shanghai, built under a day. April 1, 2014 Back in 2011, University of Southern California Professor Behrokh Khoshnevis said new technology will soon allow massive 3D printers to build entire multi-level houses in under a day. A group of 3D printed houses, 200 m2 each, recently appears in Shanghai, China. These building were created entirely out of concrete using a gigantic 3D printer, and each costs only 30,000 RMB ($4,800). The company behind these 3D printed building, Shanghai WinSun Decoration Design Engineering Co, said it has for years been working on developing the system and its materials. The company owns 77 national patents of construction materials, such as glass fiber reinforced gypsum and special glass fiber reinforced cement. 3D printing: 10 companies using it in ground-breaking ways.

A growing number of innovative companies are experimenting with 3D printers, propelling the technology closer to the mainstream market. From the big whig corporations down to the smallest startups, there are plenty of companies utilizing 3D printers to create new products, improve old ones, and better their business processes. As the technology becomes more accepted in the enterprise, it will quickly become more mainstream. We've compiled a list of 10 companies innovatively using 3D printers. 1. 3D bicycle 'printed' for Empire Cycles by Gloucestershire business Renishaw. 13-February-2014 13-February-2014 14:46 in General by The Business, The Citizen & Gloucestershire Echo. Metal Additive Manufacturing. Manufacturing The Future: 10 Trends To Come In 3D Printing.