Scientists Warn of Environmental Destruction Caused by the Wealthiest. (CN) — Affluence and over-consumption are destroying the planet and only large scale economic and lifestyle changes can save it, a group of sustainability scientists warned in a paper published Friday. 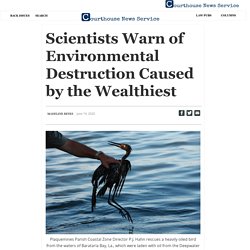 In the paper titled Scientists’ Warning on Affluence published Friday in the journal Nature Communications, a team of researchers describe the link between wealth and environmental impacts and presented possible solutions for sustainability. “Recent scientists’ warnings have done a great job at describing the many perils our natural world is facing through crises in climate, biodiversity and food systems, to name but a few,” said lead author Tommy Wiedmann, a professor of sustainability research in the University of New South Wales’ engineering department. “However, none of these warnings has explicitly considered the role of growth-oriented economies and the pursuit of affluence. “Affluence is often portrayed as something to aspire to. Like this: Like Loading... Rich and famous lifestyles are damaging the environment in untold ways. To be rich is a thing that many in our society spend their whole lives striving for. 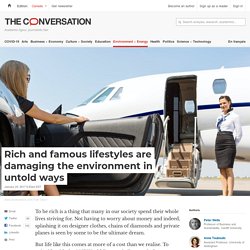 Not having to worry about money and indeed, splashing it on designer clothes, chains of diamonds and private planes is seen by some to be the ultimate dream. But life like this comes at more of a cost than we realise. To coincide with the 2017 World Economic Forum, Oxfam published a new report, which claimed that the eight richest people in the world control the same wealth as half of the world’s population. A vital debate certainly – and yet not the only one that needs to be had. We know that “wealthy” countries in Europe, North America and parts of Asia have higher per-capita environmental burdens than poorer countries, and that the people of the former are living beyond the bio-physical boundaries – the limits of the environment – in order to do so. In an average mature economy like the UK’s, the ecological footprint is 6.69 global hectares per person. Together we can change the rules. About. 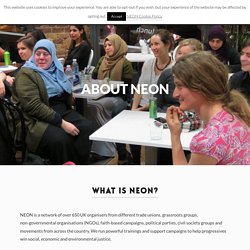 NEON is a small organisation our programmes are led by a small core staff team. We’ve operated independently since we left NEF where we were based until summer 2015. Daniel Vockins (Executive Director: Strategy and Fundraising) Daniel co-founded NEON in 2013, he leads on organisational strategy and fundraising. Before leaving to work full time on NEON, Daniel was a Principle Director at NEF (New Economics Foundation).

These early days of the 21st century are profoundly troubled. 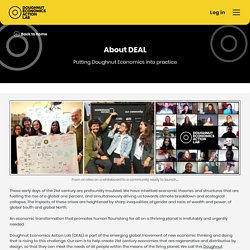 We have inherited economic theories and structures that are fuelling the rise of a global one percent, and simultaneously driving us towards climate breakdown and ecological collapse. The impacts of these crises are heightened by sharp inequalities of gender and race, of wealth and power, of global South and global North. An economic transformation that promotes human flourishing for all on a thriving planet is irrefutably and urgently needed. Doughnut Economics Action Lab (DEAL) is part of the emerging global movement of new economic thinking and doing that is rising to this challenge. Our aim is to help create 21st century economies that are regenerative and distributive by design, so that they can meet the needs of all people within the means of the living planet.

Here's what DEAL does, working across three levels of transformational change: Reframing economic narratives Influencing strategic policy. SevenAcupuncturePoints. For the sake of life on Earth, we must put a limit on wealth. It is not quite true that behind every great fortune lies a great crime. 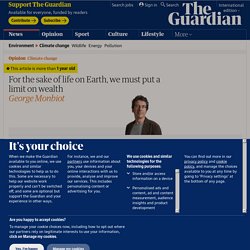 Musicians and novelists, for example, can become extremely rich by giving other people pleasure. But it does appear to be universally true that in front of every great fortune lies a great crime. Immense wealth translates automatically into immense environmental impacts, regardless of the intentions of those who possess it. The very wealthy, almost as a matter of definition, are committing ecocide.

A few weeks ago, I received a letter from a worker at a British private airport. Where are these single passengers going? Perhaps we shouldn’t be surprised to learn that when Google convened a meeting of the rich and famous at the Verdura resort in Sicily in July to discuss climate breakdown, its delegates arrived in 114 private jets and a fleet of megayachts, and drove around the island in supercars.