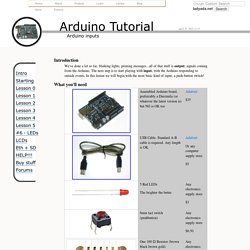 The next step is to start playing with input, with the Arduino responding to outside events. In this lesson we will begin with the most basic kind of input, a push-button switch! You're probably familiar with switches, there's tons of them in your house. One kind of switch you use every day is a light switch. A light switch is a simple device with two positions, on and off. On the left, the switch is open and no current flows. (thanks wikipedia!) In this photo, you can see the internals of a light switch. Light switches are great but we need something smaller. These little switches are a 1/4" on each side, cost about 25 cents, and can plug directly into a breadboard.

Normally, the two wires are disconnected (normally open) but when you press the little button on top, they are mechanically connected. Find 5 things around the house that have switches. Switch capability. Feeding power to Arduino: the ultimate guide. Let’s deal with the problems of the various powering modes for the most famous Arduino boards, in order to overcome doubts users may have and to provide useful advices. 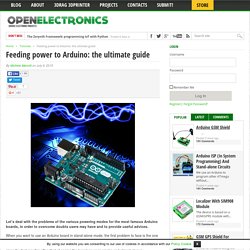 When you want to use an Arduino board in stand-alone mode, the first problem to face is the one of how to power it, once it is disconnected from the computer’s USB port. Unfortunately, a faulty knowledge of the theme of powering sometimes leads people to make unforgivable mistakes, since the first result is often that of seeing the board go up in smoke and almost always irremediably, since from that moment it will not work any more.

In the premise it is good to point out that the article will deal with the powering modes of the Arduino boards operating at 5 V (UNO, MEGA, Duemilanove); a short, specific note will be dedicated to Arduino YÚN, that is still a 5 V board, but with features that are different from the other ones. Comparison between power supplies operating on AC and DC Unregulated linear power supply. Which Board is Right for Me? For a few months after Raspberry Pi came out, the choice was pretty simple. 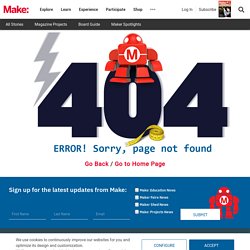 If you wanted to talk to arbitrary electronics, your best bet was to buy an Arduino microcontroller board; if you needed the power of an ARM-based processor to run Linux, the Raspberry Pi single-board computer (SBC) was the obvious choice (that is, if you could get your hands on one. Delivery issues are mostly resolved, but last year some people waited more than six months for their Pi). Before Arduino and Raspberry Pi, things were more complicated. Going forward, things aren’t just complicated again — they’re bewildering. 2.7 inch E-paper Display. Hackster.io - The community for hardware hackers. Mbed - Development Platform for Devices. Small Arduino boards. An Arduino-compatible, electronic building block system! by GHI Electronics, LLC. FEZ Medusa is an open source hardware (OSHW) processor board that combines the Arduino platform with an ever-growing list of modules, for sensing and controlling things. 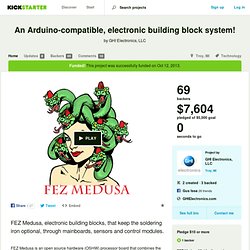 This modular design of building blocks does not require any hardware experience, we call it FEZ for fast and easy. On the software side, you will program using the Arduino IDE, just like if you were programming Arduino Uno, it even hosts the same micro ATMEGA328P. On the hardware side, everything is modular building blocks using a unified socket map. Arduino is one of the most popular platforms for educators and hobbyists.

Its open source JAVA IDE is made to run on Windows, Linux and Mac. FEZ Medusa is programmed just like any Arduino-compatible board. The sockets on FEZ Medusa and modules are marked with one or more letters indicating the socket's capability. We have already developed drivers for all compatible modules and for the core functionality that maps the Arduino libraries to the socket mapping. Open Source Framework for the Internet of Things.